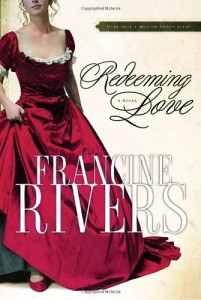 This section brings us back to more character introspection instead of action; Francine halts plot movement in order to have the space to tell us how Angel and Michael feel about everything instead of integrating that into the storytelling. I know I’ve started basically every review post saying “this is a badly written book,” but it’s true, and I just keep being reminded of it. So, I’m passing that on to you, dear readers.

Chapter seventeen opens with how guilty and dirty Angel feels– she “wanted to make up for what she had done, and sought to do it by labor” (211). This is, clearly, Francine beating us over the head with the salvation allegory she’s worked into Redeeming Love, and is condemning Angel for thinking that works can earn forgiveness. It’s also making sure we the reader know that Angel has done something that needs forgiveness– and we should all be at a loss for what, but we’re not. Angel has done nothing. She was abducted, and escaped her abuser at the first opportunity … and then was forcibly dragged back again. As Francine’s readers, though, we “know” what Angel did “wrong.” Satan told her that she deserved independence and freedom, and she believed his lie. She’s not just Gomer, now– she’s also Eve (217).

This is where Angel begins accepting Michael’s abuse. He’s forcibly demonstrated that she can’t escape him, no matter how she resists. He won’t use her name, he won’t let her leave, he orders her around (“Go to bed” [212] and “You’re going with me” [214]) and neither verbal or physical refusal stops him. He will simply overpower her; she has no choice left but to accept that this is her life now.

So, like most abuse victims, she turns to scrupulousness. If defiance won’t work, maybe doing everything she can to make sure her abuser is happy will. He told her that the garden was her responsibility (212)– so maybe if she works the garden perfectly he’ll see her as a human being worth respecting. If she anticipates his desires, if she makes the cabin comfortable, if she cooks flawlessly and obeys instantly … maybe just maybe he’ll “forgive” her and stop his abuse. If this sounds familiar to you, that’s because this is the method advocated by every single complementarian marriage-advice book on the planet. The way to a happy and healthy marriage is by being the perfect homemaker. If you’re not dutifully submissive and fulfilling your patriarchal gender roles, your husband will be unhappy and angry and take it out on you. It makes sense that this is the path Francine has Angel take.

This section largely deals with Angel’s understanding of religion and God. Frustratingly, her point of view is basically a badly-informed evangelical stereotype of Catholicism, and what’s “wrong” with her understanding of God is “Catholic.” She has a “Catholic” understanding of the Garden of Eden, her interpretation of Bible stories aren’t evangelical so they’re wrong, and of course Catholics don’t read their Bible.

What we as the reader are supposed to take away from this part of the story is that Francine’s view of God is horribly wrong. Evangelicals of course know that God wants to have a relationship with us, that he loves us, that forgiveness and grace are freely available if we just say the word. Angel, however, think that God is angry and wrathful and vengeful, and is waiting up in heaven to crush her “like a bug” (227). She even introduces the Problem of Evil:

Michael took her hand again and wove his fingers with hers. “God had nothing to do with it.”

Her eyes felt strangely hot and gritty. “He didn’t stop it either, did he? Where’s the mercy you’re always reading about? I never saw any given to my mother.” Michael was silent for a long time after that. (229)

Honestly, this is the first thing Francine’s done that I’ve somewhat appreciated. Angel’s life, as Michael described, has been “hell,” and God in his heaven had never intervened. This is a legitimate question, and one I’ve never satisfactorily answered for myself. Redeeming Love doesn’t provide any answers, either– at least not here. I imagine we’ll get the “free will” answer at some point.

However, what Angel and the reader are supposed to understand is that God is not like her father, or Duke, or any of the men she’s known– God is like Michael. God is forgiving and loving and wants to know us, like Michael loves and forgives and wants to know Angel. The problem with all of that, of course, is that Michael is an abuser. Angel thinks that God is waiting to crush her like a bug … and Michael is waiting to drag her off to anything he so wishes. Evangelicals talk a big talk about how amazing their God is, but when the rubber meets the road and they start talking about what God is like in practice and not just in theory, he really is just a bully. He abducts grown women — repeatedly– orders them around, and overcomes all resistance with physical force.

Angel is not wrong about Michael’s God.

The last message that Francine wants to beat us over the head with is how wonderful complementarianism and gender roles are. The Jewish storekeeper thinks “As gentle a man as he was, as tender was his heart, there was nothing weak about Michael Hosea” (223), which we know from the fact that Michael took on all comers in a barfight and walked out unscathed. Later we meet the Altmans, and we get this description:

The Altmans fascinated Angel. They all liked each other. John Altman was clearly in charge and would tolerate no disrespect or rebellion, but it was clear he was not held in fear by his wife and children. Even Jacob’s [eldest son] rebellion had been handled with good humor. “Whenever you don’t listen, there’s going to be stern discipline,” his father said. “I’ll supply the discipline, you’ll supply the stern.” The boy capitulated and Altman ruffled his hair affectionately. (240)

Through the pages that introduce the Altmans, we get a picturesque, Rockwell-style happy family. The siblings all get along splendidly, and the father is respected, obeyed, and adored. Michael is basically enraptured. He wants them to live in his cabin until spring and be his friends– without bothering to consult Angel, he just decides— maybe even buy the farmland right next to his! They’re just such wonderful people, wouldn’t that be grand? It’s clear Michael thinks they’re the perfect family. He even falls asleep whispering about how he wants one basically just theirs (241). A family where his word is law and everyone is just so dang happy about it.

Which is of course where we get hit with a double-barrel flashback to Angel being sterilized. I can’t wait to see where Francine goes with that.