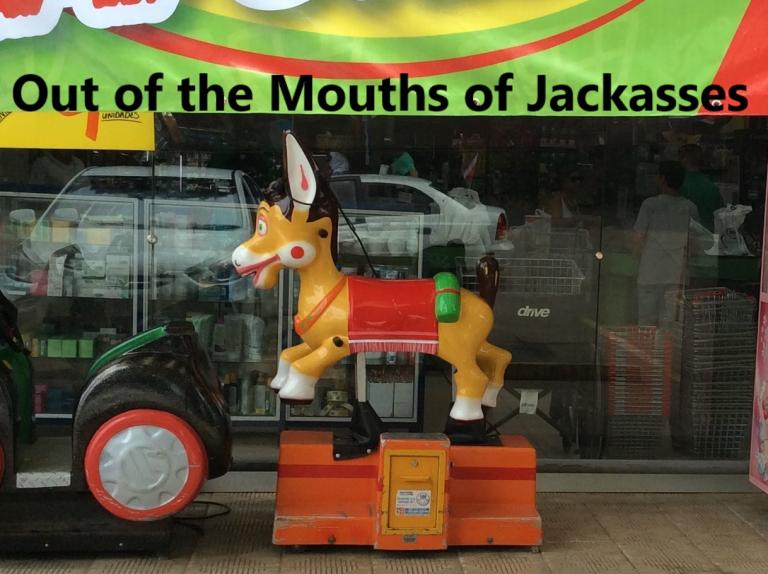 Doug Wilson of Blog and Mablog is particularly word salady and disgusting in this piece titled Hollow Soul Bullets. Wilson is speaking of last week’s massacre at Parkland Florida high school Marjory Stoneman Douglas High School.  17 people, students and staff, lost their lives to an expelled student known to be troubled. He shot up his school with a formerly banned assault rifle and is currently in custody.

I went into Wilson’s blog to see if he, like other fundamentalists and Republican hard-core, was outraged by the student survivors organizing to demand that our government take action to assure that no more mass murders take place in the schools of the nation. No more Columbines, no more Newtowns, that no other child would have to endure what they did. There are cries on the conservative sides bordering on fantasy, that the courageous young people organizing to end the danger were FBI apologists, media shills, paid off, puppets of the left.

I was sure I would come into Wilson’s blog and find him bloviating with big words how the kids were tools of Satan, or the Left, or the FBI. Nope, Wilson is blaming the shooting not on the easy availability of assault rifles and other automatic weapons, or that hoary old chestnut most everyone trots out – mental illness. Wilson has a laundry list of the disgraceful, that sound almost like that horrible Tomi Lahren fake meme circulating online that blames a lack of faith for the shootings.

Wilson starts off blaming the fact that he thinks all of these shooters come from homes without fathers present. The unstated implications that you pick up from Doug’s other writings is that this is due to divorce and sin. He conveniently ignores the fact that the shooter, Nikolas Cruz, lost his father to death, not divorce. Not all of the fatherless are due to sin.

But Wilson’s main blame is on the fact that he thinks that too many people have not embraced his version of God. Yes, blaming it on the lack of God in the lives of everyone involved.

No, Doug, it’s not drugs for depression, it’s not fatherlessness, it’s not public school, it’s not a lack of God fueling this madness. Some of those things might play a very small part in what’s happening, but it’s not the full answer. Banning assault weapons that serve only one purpose, to kill human beings, is a start.

I guess we should all be thanking he’s not shrieking about government conspiracies and crisis actors like many of his contemporaries are. Even Pat Robertson has come out and said there should be an assault weapon ban. Pat Freaking Robertson of The 700 Club! Other religious leaders have stated it’s time to stop offering ‘thoughts and prayers’ and take real action.

February 21, 2018 Billy Graham Helped Create Toxic Christian Patriarchy
Recent Comments
29 Comments | Leave a Comment
"This is late, partly bc of my preoccupation and partly bc I'd been slowly reading ..."
Jennifer Serena’s Serenity – Luxury Hotel, Birthing ..."
"Thank you for your commitment to truth and love, Suzanne. Best wishes to you and ..."
Meredith Anne Not a Goodbye, More of a ..."
"For what it's worth, I've learned a lot from you about a Very Creepy movement ..."
Gwen Pryce Not a Goodbye, More of a ..."
"Unfortunately, this kind of satire (if it even is satire) is what gives Christianity the ..."
Emily Is Biblical Gender Roles a Big ..."
Browse Our Archives
Related posts from No Longer Quivering