Lori Alexander – A New Bad Idea For Each Day 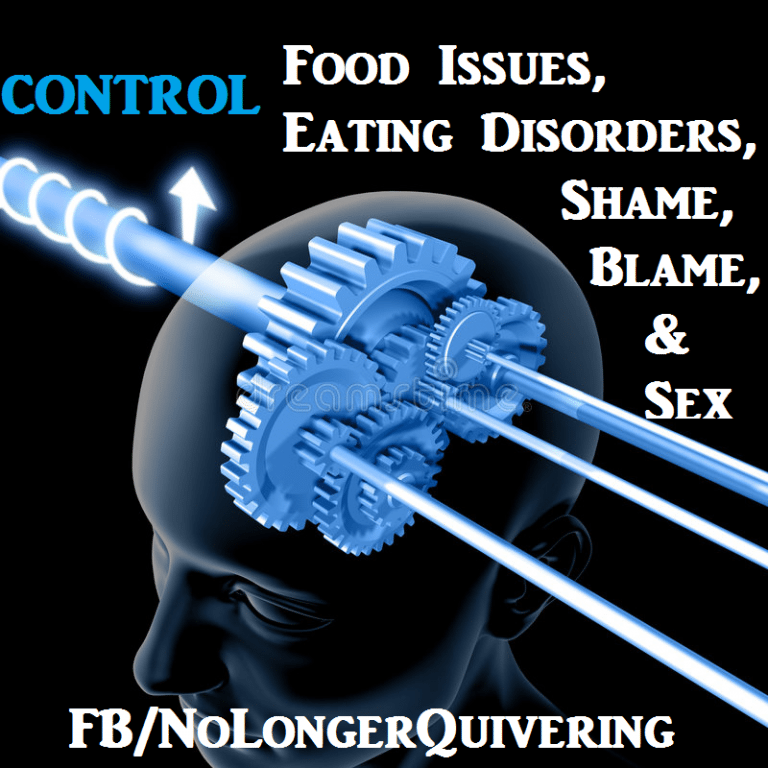 Just could not content myself with a lengthy Lori Alexander – The Transformed Wife post on any one topic because in the last week she’s been all over the map of awful ideas. I guess anything to distract herself from whatever reality her actual life is, and since her pals the Pearls seem to be pulling more of their awful ideas off the web. This is the usual stew of hating feminists, misunderstanding historical precedents, lying about feminism, complaining/whining about her health, ordering you to keep your children by your side always, ordering other women to shut up (surprise, surprise) and claiming that women are easier to fool than men. That last one might be true if you take into consideration that her followers swallow her codswallop without questioning it, or adding A-1 sauce to make it more palatable.

Sockpuppet Trey sounded off even more on the one post we quoted him on, positively pontificating putrid thoughts. Trey’s answers telling women to fear their husbands and the timeline of misery of his marriage seem like more indicators that he is Ken Alexander in disguise. Oh, what a web we weave, well you know…

First up… She Never Tells Him What To Do

Adults should never tell adults what to do in the first place if they are not asked what to do! This is just common sense, not ‘Biblical’, like Lori claims here. Respect other adults and allow them to make their own choices, food or otherwise, this includes your husband. If you see him about to do something super stupid there’s nothing wrong with saying ‘I don’t think you should do that because…..’, but that’s still not ordering someone to do something.

The other night when I posted the sausages meme someone on Facebook snippily informed me that I was wrong to serve my husband all that ‘processed food’, not realizing he loves processed foods, and while I’ve told him that isn’t likely good for him I don’t try to control what he eats.

He is a grown man capable of deciding if he wants hotdogs or tofu. Healthier to deal with a spouse that eats crap by eating right yourself and not nagging him. It’s not submission, it’s common sense.

Are Women More Gullible Than Men?

I don’t know if women are more gullible than men, but life experience has shown me again and again that people in a tightly controlled isolation usually are. How else can the guys of the CPM (Christian Patriarch Movement) get people to go along with toxic ideas that only harm themselves? 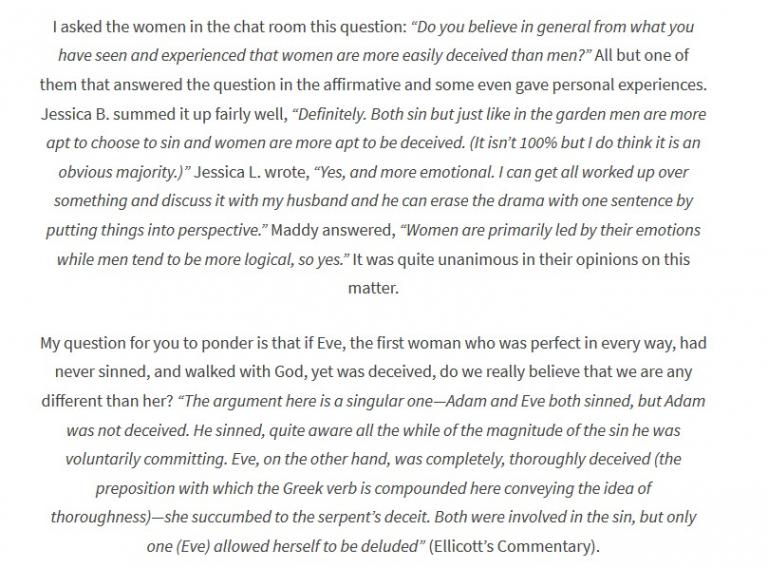 I don’t know, Adam eating the apple because of what Eve said seems deceived to me. He was clearly as gullible as Eve, but he behaved like a gutless wonder,  blame-deflected by telling God that Eve made him do it. He comes off as worse in my book. I guess he was just setting an example for the CPM guys to follow.

So Lori’s entire argument on women being easier to fool than men is apocryphal tales from her chat room and obscure scriptures. That’s the equivalent of me going to the beach here and polling sunburned Gringo tourists if the sun is hotter here. It’s meaningless because it’s a skewed poll conducted in an echo chamber.

But Women Don’t Want To Be Silent

This one is really quite silly. It’s Lori answering a commenter, which I’m sure she immediately deleted the comment after copying and pasting it to reply to in a post – Lori cannot handle any sort of push-back, debate or disagreement. She merely silences the other side by deleting the comment and blocking the poster, like some poor bruised middle schooler who cannot handle people telling her that her love for Justin Bieber is one-sided.

This is in reply to someone that think Lori’s words the day before saying that women cannot pastor or teach because they are supposedly more easily fooled. 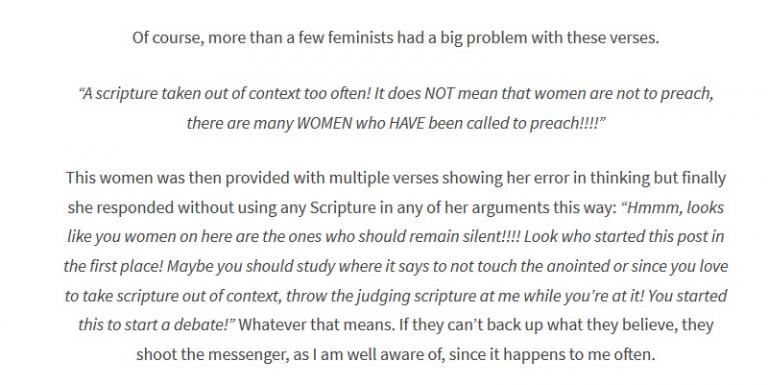 Lori is the one that cannot legitimately prove what she’s saying, but again tries to say it’s all ‘Evil Feminists’ that disagree with her. Funny because I would venture that the lady disagreeing with Lori is a Christian woman that knows the scriptures as well as Lori. How is that being a feminist?

Mama, Carefully Keep Them By Your Side

Looks almost like Lori ran out of ideas and decided to rewrite something by Above Rubies Nancy Campbell. This is a constant theme of Nancy’s to keep your children right next to you to keep them under the mind control of whatever fundamentalist theology you follow. Except, this is lifted and quoted in full without permission from the homeschooling magazine The Old Schoolhouse.

Oh brother! Why do the women in the Quiverfull culture have to be constantly reminded, patted on the head, praised for doing the same things the rest of us do without requiring such patronizing words?

Did Feminism Help Women Own Property?

Here’s where Lori goes very very wrong. She makes a number of claims about how legislation in the 1800s is what gave the right to own property and have bank accounts that had nothing to do with feminism. While that is true that modern feminism had little to do with the laws, she does not look at why these laws even came about in the first place. Many times these laws came out of a male need to protect marital assets from creditors, or even to cheat someone the husband owed a debt to. The law benefits those women and children who would have been left penniless under the laws that viewed husbands and wives as one. Stable household economies benefit society as a whole, and keeps women from having their earnings and assets removed from them with no say on their behalf. Laws enacted to help women and children. Before the laws women in American had no legal fiduciary standing. A woman could work hard all week in a difficult job like a domestic, get paid, have her wages taken from her by her husband to drink away while she and her children went hungry with zero recourse. 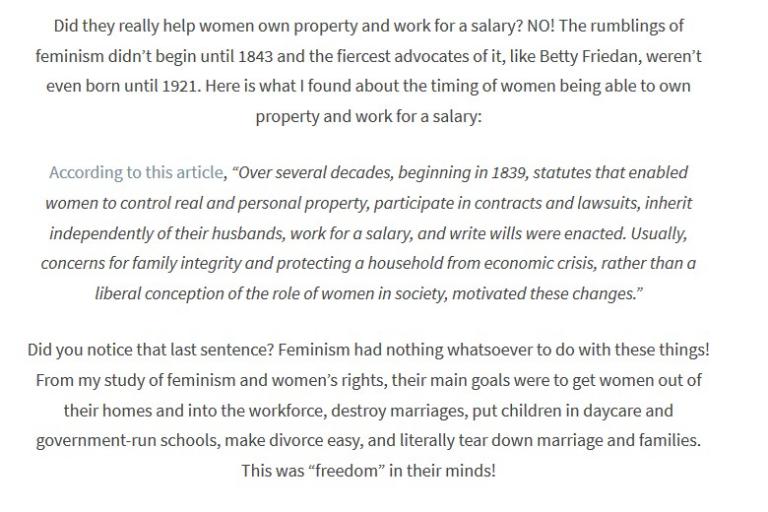 Lori looks only that law on Wikipedia, not the circumstances that created a need for the law in the first place, the lack of any safety net for women and children, or even the history of financial rights throughout the ages. One source with about as much understanding as a chimpanzee with a typewriter understands typing. Laws are not created in a void, and  I would bet that whatever group or organization that later did morph into women’s rights groups was involved in the creation of these laws.

Lori herself benefits from these laws, even as I’m sure she’d never admit it.

The fact that she ignores the abuse that is behind these laws is reprehensible yet again.

Choose Your Redeemer in Your Suffering

Quoting this post not because I disagree with focusing on something else than your suffering. I actually think it’s a good idea, and one I’ve been able to put to good use.

This is another of Lori mentioning her health issues and what I find intriguing about her mention here is that she says that it was only after this healthy crisis, which sounds like it might have been a little more than ten years ago, that she started teaching other women. I’m trying to construct a time line of her ministry and ideas.

Was this also when Lori started reading Debi Pearl’s book ‘Created To Be A Help Meet’ and transforming her theology?

Whew. That’s a whole lot of Lori for one day!

February 21, 2018 Florida's School Shooting Occurred Because Public School, Government and Lack of God?
Recent Comments
27 Comments | Leave a Comment
"This is late, partly bc of my preoccupation and partly bc I'd been slowly reading ..."
Jennifer Serena’s Serenity – Luxury Hotel, Birthing ..."
"Thank you for your commitment to truth and love, Suzanne. Best wishes to you and ..."
Meredith Anne Not a Goodbye, More of a ..."
"For what it's worth, I've learned a lot from you about a Very Creepy movement ..."
Gwen Pryce Not a Goodbye, More of a ..."
"Unfortunately, this kind of satire (if it even is satire) is what gives Christianity the ..."
Emily Is Biblical Gender Roles a Big ..."
Browse Our Archives
Related posts from No Longer Quivering