So while we’re on the subject of white nationalist Quiverfull types like Ayla Stewart today I noted that her newest target of outrage is no longer the website Buzzfeed, but news giant CNN. She’s accusing them of bullying her because they contacted a company that advertised on her hate speech filled Youtube channel and that company, UnderArmour immediately suspended their advertising from her channel and YouTube.

Here’s the CNN article and a screen cap of what CNN did say: 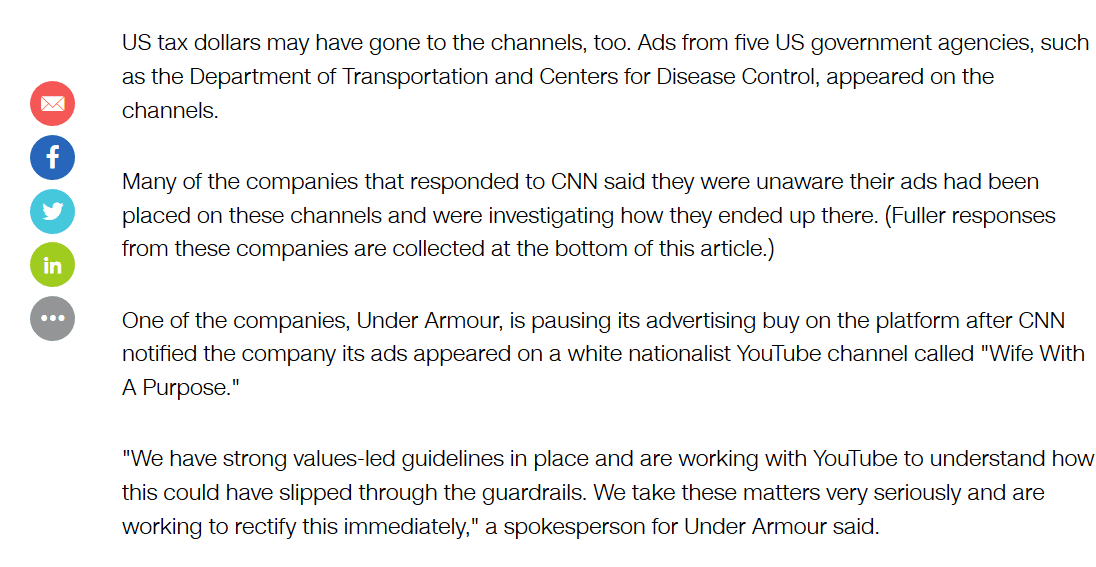 I don’t quite see what Ayla is foaming at the mouth about. She is a white nationalist and she does have a white nationalist YouTube channel. It’s the right of CNN under the first amendment to point out to the masses and Under Armour when that advertiser is linked to someone with ties to hate groups/speech, even if they are hiding under the theology of Quiverfull and Mormonism. It’s their right.

Here’s where smarmy hater of everyone of other races started having something of a misdirected snit fit over CNN called her out for exactly what she is on her blog.

I am not even going to start picking apart all those grinning selfies she sticks all over her site before screaming she has threats and stalkers. It’s pretty clear that the real payoff in all of this for Ayla Stewart is attention, not spreading the news of Christ, or promoting traditional Christians values. But here are the facts about her allegations.

1. – CNN’s audience size is roughly a million viewers per week. What is Ayla’s? She has 10,536 subscribers and the biggest view numbers on any video of hers I’ve seen was 4, 193 over the course of six months. I didn’t like calculus or  trigonometry in high school or college, but even I know that over the course of six months 24,000,000 is significantly greater than 4,193. Gnat meet Goliath. Hope she’s not homeschooling her children and teaching them math.

2. – Again, math fail. 10K subscribers is a drop in the bucket up next to the official numbers of CNN’s regular audience. So she picked up  50 to 100 other white supremacy nuts? Who cares, because none of this is going to make her rich, which I think is her true motivation in this nonsense of hers.

3. – When you deliberately fish for attention by posting all those grinning like a baboon selfies combined with photos of your children, YouTube your hate speech that shares nothing with the words of Jesus but a great deal with the KKK, scream out vile ideas internet-wide you’re going to get some hate mail. Everyone even slightly prominent online gets it. It’s just most of us laugh, delete and move on. She’s using the push back to garner even greater attention. All this screams of the desperation of an attention whore. Grow up please.

There was no lying or  bullying from CNN. They exposed a flaw in how YouTube places ads, and the advertisers reacted accordingly. The thing that Ayla Stewart is really angry about is that she’s losing out on money from advertisers. This is hitting her in the pocketbook, and like so many that have monetized hate speech she cannot stand that.

Facebook isn’t stupid. They know which side their bread is buttered on, and will continue to allow CNN to post updates on their news reports. They will make money off CNN using FaceBook.  Ayla Stewart? I seriously doubt she’s bringing Facebook much cash.  Maybe not so much if they ever crack down on hate speech. Let’s face it, what Ayla Stewart is pushing on her blog and her YouTube channel has nothing to do with the real love of Christ, Christian values, or anything high and worthy, but everything to do with hatred of others. The only hate here is Ayla’s not CNN.

For the record, since I know Ayla is obsessed with every bit of media about her, I’m not a fan of CNN, Fox or MSNBC and prefer other news sources since she will likely claim I’m a CNN fan.

Also, it’s ‘accept’ not ‘except’. But CNN has not done anything to ‘accept’ blame or responsibility for towards Ms. Stewart. Another reason she should not be homeschooling.

I’ve read the article and see no evidence of bullying. She’s going to need more than her own empty claims to be taken seriously. Folks, this is what silly martyrbating looks like.