One of our dear readers posted a link to another Patheos blog in the Evangelical section. The author is C. R. Wiley, a middle-aged Presbyterian pastor in super white bread Connecticut, and it shows by his assumptions in his piece at Paterfamilias Today.

So much White Man Entitlement from the kissy-faced photo of a  young woman used to illustrate single Christian women, thru his notions of the need for hyper masculinity. What are all these Evangelical and Quiverfull men so gosh darn afraid of that they must constantly harp on the issue of masculinity? It’s weird and obsessive, as if they will completely fall apart if anyone even slightly thinks they might possibly not be raging straight men. Fear of man?

Newsflash to Wiley! Having a penis gives you no special rights or powers at all. It just means you are male. That is all.

The piece he’s written rather heavy-handedly deliniates the need of these poor single Christian women to change up their own behaviors to find Mr. Right and Insecure About His Sexuality. It’s not neccessaily that his advice is lacking, oh no, some of it makes sense if your entire life’s goal is to find a man and marry him. It’s more than everything he is saying is based upon the antique assumptions that women are dying to get married as quickly as possible to the most macho man in their churches. 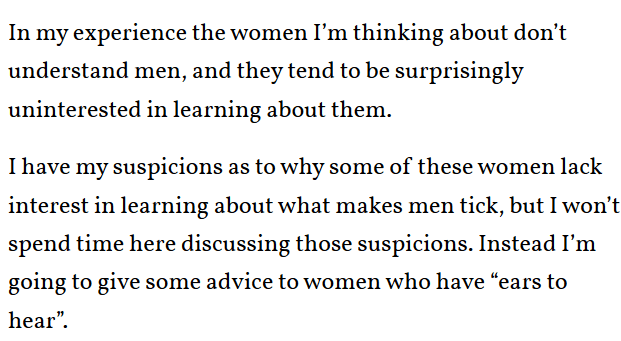 Wow! That’s a rather woman-shaming, blaming and disrespectful statement to start with. No women is under any obligation to make any effort to understand men from whatever warped white male entitlement angle he’s coming from. I’d venture to say that you shouldn’t listen to this man because of his real thoughts, revealed by his words here, on women.

He goes on after this to advise women to go where the guys are. Don’t join the Jane Austen Fan Club, but find somewhere where the manly men congregate. The physics club. Just wow, like women are not into physics and would not join unless they are husband-hunting?

Does anyone actually husband-hunt any longer in the first place? Are there women out there just swooning and dying to have a husband? I’m just not seeing it out in the real world, just in cult churches where the obligations on both sides upon marriage are loathsomely onerous.

His second piece of advice is even more ridiculous, be helpless and drop your hanky, flirt and be helpless. Deny your own power, competence and self respect to be a brainless little dolt to attract that manly could not be a homo man.

That’s not at all what feminism is about. It’s about having equality with men across all rights, equal pay, equal access, equal rights. The masculine men that Wiley is describing in this part are clearly not masculine at all, but weak wimpy Christian guys that cannot cope with the thought that they might have to deal with women in the workplace.

Dropping the hanky, as the author puts it, is manipulation, manipulation of men, which really makes me laugh because isn’t manipulation listed in the Bible as akin to witchcraft? He’s straight up ordering women to fake and lie to get a man. No healthy emotional relationship can be built on a foundation of lies.

Wiley follows by saying don’t be one of the guys. Be a woman, with all the narrowly defined gender roles he thinks are important.

And for the coup de grace, don’t wait according to Wiley since that clock is ticking on your freshness and fecundity.

Let’s see. Here we have someone that claims to be a man of God that says nasty things about women, wants you to be fake and possibly lie before trying to fear monger and cram you into his own one size fits all gender roles.

Thankfully we don’t have to take his advice. We can find a man or not as we want. We don’t have to settle for stupid game playing, for trickery and faking. We can have relationships that aren’t so lopsided with guys who are not obsessed with seeming not gay, who aren’t threatened by our true selves.

About Suzanne Titkemeyer
Suzanne Titkemeyer went from a childhood in Louisiana to a life lived in the shadow of Washington D.C. For many years she worked in the field of social work, from national licensure to working hands on in a children's residential treatment center. Suzanne has been involved with helping ithe plights of women and children' in religious bondage. She is a ordained Stephen's Minister with many years of counseling experience. Now she's retired to be a full time beach bum in Tamarindo, Costa Rica with the monkeys and iguanas. She is also a thalassophile. She also left behind years in a Quiverfull church and loves to chronicle the worst abuses of that particular theology. She has been happily married to her best friend for the last 32 years. You can read more about the author here.
Previous Post