This has been quite the week in Lori Alexander’s world and on her blog The Transformed Wife. She’s quoted a known white supremacist that is well known in her quest to denigrate all women. There is no depth that Lori will not stoop to in her war on all women.

Today she’s quoting the Bible, pulling out clobber verses. All of these verses have one thing in common – they name women as the lowest of scum, capable of any and every deceit, destroyers of society. Unbelievable  hurtful and hateful, makes me despair for our world when I run across women like this.

She starts off this way, claiming she stumbled over these verses during her morning Bible reading time. Unlikely, she likely searches the Bible for all of the verses describing women in the most hateful terms. 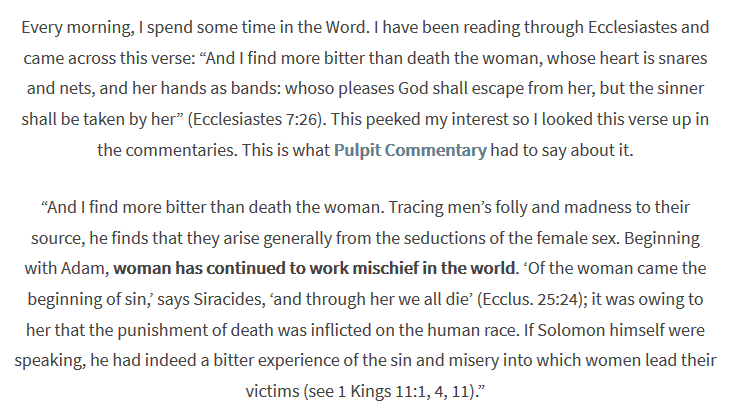 I think the word Lori is awkwardly grappling for here is ‘piqued’ not ‘peeked.’ Word definitions matter. I believe that the usage Lori was trying to make was of being suddenly intrigued or interested. Not the first one of feeling irritated or resentful. But truthfully either work for this piece.

The only bitter woman I see in this piece is Lori Alexander herself. What type of empty unhappy woman does it take to constantly go out of her way to say only negative and nasty things about other women? She obviously spends large blocks of time daily searching and researching for the words of others to push the idea that everyone but her is evil and wrong.

That’s a pretty sick mind to do something like that. It’s not the mark of anyone mentally healthy. Mentally healthy people do not worry about if everyone else is busy toeing some imaginary line. Healthy people figure that the faith or lack of faith in others is between them and their God. It’s none of their business and when exposed to it they tend to not allow it to color their view of the other person as ‘evil’ or ‘bitter.’ 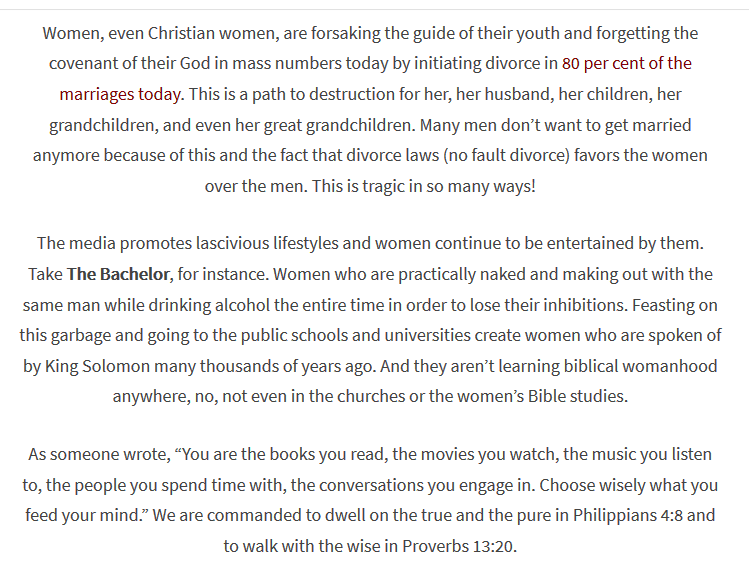 Lori is starting to sound more and more like something online called a ‘Female Honey Badger’, a woman that turns against everyone of her own sex to promote a dangerous male agenda of the mens rights activists. Like those inmates in the German prison camps during World War II that ratted out fellow inmates for a pack of smokes or more food. I just do not know what Lori and the other Honey Badgers emotional payoff is.

I am unfamiliar with show Lori is talking about, ‘The Bachelor’ beyond the name and it’s some sort of dating show. Why would that be? Because I value my time and do not watch reality television, but it sure sounds like she does when she’s not watching movies on The Hallmark Channel.

Exactly how a trashy reality show relates to going to a university to earn a degree is a legitimate field is also a mystery. Going to school to work on a degree is hard, it’s worthwhile and at the end you have the prize of having gained valuable knowledge that no one can take away from you. It does not corrupt, it does not rust. It is yours forever, whither you use it or not.

There is one thing she’s right about, you ARE all of those things you partake in. What does that make Lori? She’s choosing to watch reality television shows it sounds like. She watches those silly romance movies on Hallmark. She hangs around with, talks to and is too friendly with men who are white supremacists, women who hate other women, people that advocate beating children and other cruel practices, and the home grown terrorism of mens rights activists. Do you see any Jesus there? I don’t think so.