You could have knocked me over with a feather this morning when I went into Larry Solomon’s Biblical Gender Roles to find Larry ranting about historical issues and our former president Franklin Delano Roosevelt. History-mangling is usually the purview only of one rather bloviating pastor named Doug Wilson. Wilson likes to dabble, come to wrong conclusions and throw about pretentious words. Larry hasn’t done that here, in fact Larry’s words are more like upside down land. He takes things like the Great Depression and the sweeping social programs that pulled the country out of the crippling era that followed the Gilded Age, and claims it’s the opposite that the Civilian Conservation Corp and the Public Works Administration prolonged the suffering.

What started Larry into his rantings of the evils of socialism like FDR and Frances Perkins was Elizabeth Warren speaking of Perkins.

Perkins was the first women to be the Secretary of Labor and enacted many programs to benefit everyone. She was a first hand eye witness to the tragic Triangle Shirtwaist Factory in which 123 poor women perished in 1911.

Because of Perkins we now have 40 hour work weeks, poor women have working rights not to be forced to labor in unsafe conditions for hours on end. We have the national parks and many public works because of the work of the CCC and the PWA. Things that are practical and benefit everyone. Larry would have you believe that they perpetuated the Great Depression by putting the massive hordes of unemployed men to work building roads, bridges, and so many parks.  I guess Larry thinks things that benefit us all are evil plots. 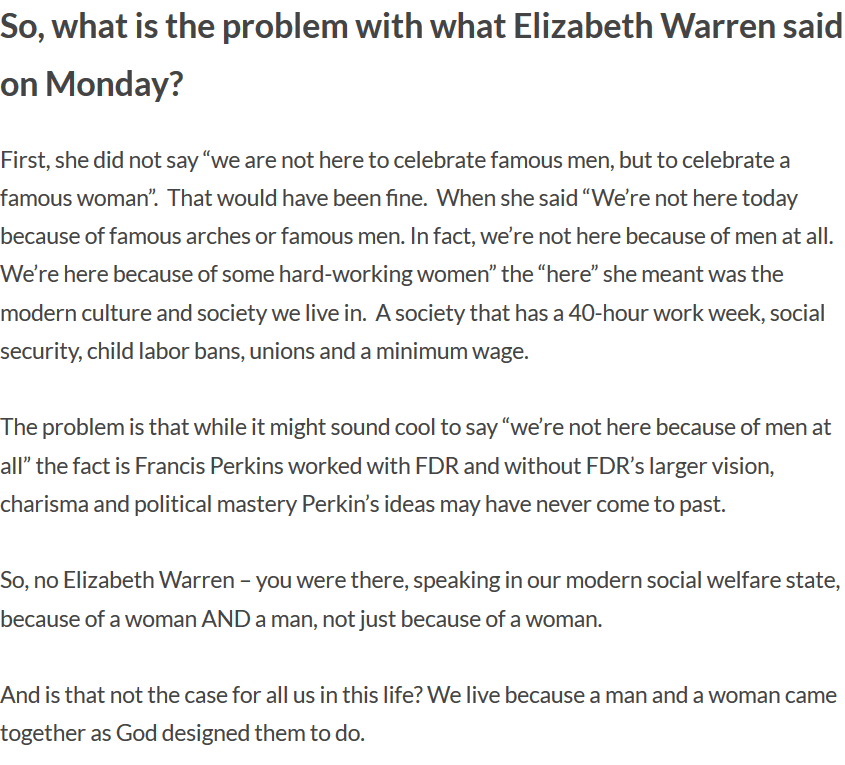 Larry does not seem to realize that good men share the power, the responsibility, and the wealth with others, including women.  His ideas that a woman cannot make a difference unless a man clears the way for her is just wrong-headed in all ways. Women are moving into all spheres of influence.

Larry then goes on to try and excoriate the polices of FDR’s  presidency, linking to obscure right wing economic sites. The funniest thing is Larry’s allegations that the New Deal extended the Great Depression to many more years than it would have been had Republicans been in charge.

Dear Larry – reality check time. THE GREAT DEPRESSION HAPPENED ON THE WATCH OF A CONSERVATIVE REPUBLICAN PRESIDENT whose official policy was hands off on all matters economic or involving the individual lives of our citizens. Programs that put unemployed average Joes  back to work, restoring pride, self worth and providing a wage are the only way to end these types of situations. Larry goes on to make silly assertions that Republicans give way more money to the poor than Democrats, and tries to use it as a justification to end any sort of government program, claiming only individuals and churches should be supporting the indigent. Remember how well that worked out last time? Poor farms here in America and the cruel system in the UK of the workhouse. I guess if there’s not a humiliation factor then Larry does not approve.

Larry’s biggest bone to pick with FDR seems to have been to this assertion:

I am always amazed by the historical revisions of the Larrys and Doug Wilsons of Evangelicalism. Does an educated, employed, healthy populace with decent housing really sound so threatening to Christians?

FYI: No links to common places supporting these ideas only because I’m in the States and had to buy a new laptop after mine finally died. Struggling with a new system that is not user friendly and still working out the bugs.  Everything listened above can be easily supported by information at History.com or in the Dept of Labor website. Larry, on the other hand, only has links to obscure fundamentalist sites.

September 19, 2019
Duggars in the Bahamas - There Without Approval?
Next Post