Woke up this morning to another Lori Alexander of The Transformed Wife ranting yet again about modesty and not luring men into sin with your flesh. Lori Alexander uses Kim Kardashian to promote modesty? The mind boggles!

Keep in mind that Lori herself has been photographed wearing rather short shorts and well above the knee skirts.  All the while preaching about modesty, yet excusing her behavior by saying this is what her husband Ken wants.

Is it modesty, or what your husband wants that is the most important here?

So why is Lori bringing up Kanye West and his wife Kim Kardashian? Likely because Kanye seems to be the newest big celebrity to come out of the closet as the right kind of Christian. I don’t know what denomination Kanye is, but he said this about his wife and Lori leaps right in to embrace it, booty shorts and all.

I’m not a big fan of either Kanye or Kim. His music isn’t my favorite, even if he does do a few songs I like. Prefer Tupac or Eminem. His ridiculous shenanigans have always left a bad taste in my mouth. It’s hard to take him seriously.

Not a fan of the wife either, and it has nothing to do with her nude and nearly nude displays, and more with her family’s money and attention grubbing ways. I will say she’s partially redeemed herself in my eyes by her activism on the part of prison reform.  Prison reform is badly needed in the United States, and if it takes a reality television star to make that happen so be it. If she uses her status to help right injustice it can only be good. 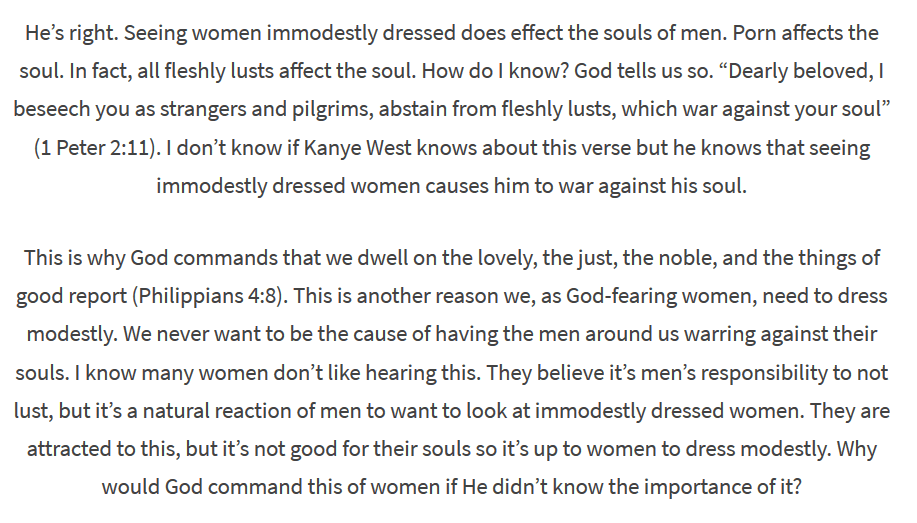 Lori finally gives a definition for what she considers “Shamefaced.” I’ve been wondering about this, as I know some of you have because it’s just not that common of an expression. In my years in Quiverfull I never heard it explained this way, to not draw attention to ones self. I kind of thought that it was pretty standard to the fundamental thinking in most parts of Christianity that a lady does not wear “LOOK AT ME!” type clothing? Cover what you legally must cover and it’s all good.

Which leads me to another thing about this false modesty practiced in Quiverfull. Is dressing like many do in Quiverfull really modest in the “shamefaced” way Lori is describing? Recently I was in the States, shopping in a Goodwill store. I was wearing a pair of old loose leggings, flipflops and a sleeveless loose long tunic. While I was going through the racks I heard a disapproving “Hhmp!” and turned just in time to see a lady of my age group glaring at me. She was wearing a calico jumper, a loose long sleeved tee, tights, and flats. Her hair was swept up in a almost Gibson Girl bun, and a huge cross dangled between her amply disguised breasts. Covered from collarbones to ankles.

I’ve thought about the encounter several times since it happened. I laughed it off at the time, but now I wonder. Which of us was truly “shamefaced”? Me who blended right in with how everyone else in the store was attired? Or her, a woman that stood out like Kim Kardashian at a nuns picnic? I had almost as much flesh as she covered from display, right down to my loose tunic covering my lumpy rear. 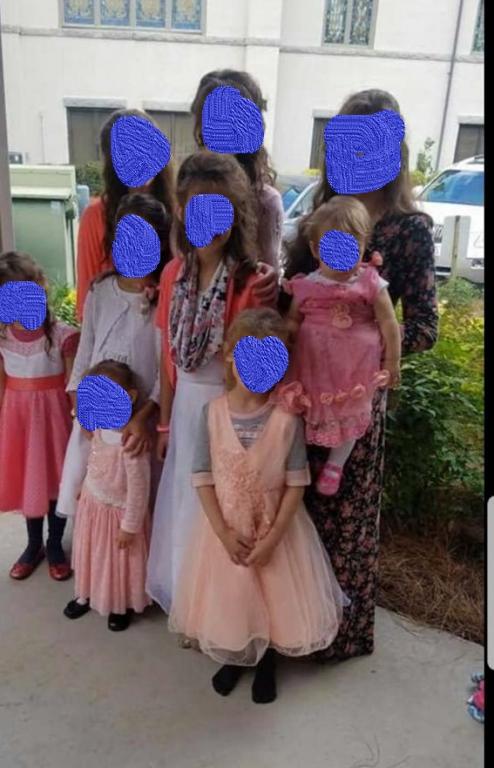 Screen cap from an almost famous Quiverfull family. Covering faces because I don’t wish to expose minor kids.  Is dressing your children like this really modest or shamefaced or is it really shame based?

Regardless of Lori’s insistence on modest apparel while she’s wearing shorts one thing is for sure. It will be interesting to see how the rest of the Evangelical Christian world will react to Kanye West joining in. He announced this week he’s only going to be recording Christian music. We live in interesting times!

Dress how you like, what suits your activities, your needs and wants. I’ll never take these modesty enforcers seriously until they start looking at what men wear, and they don’t move the goalpost just for themselves.