The Passion of Kanye West 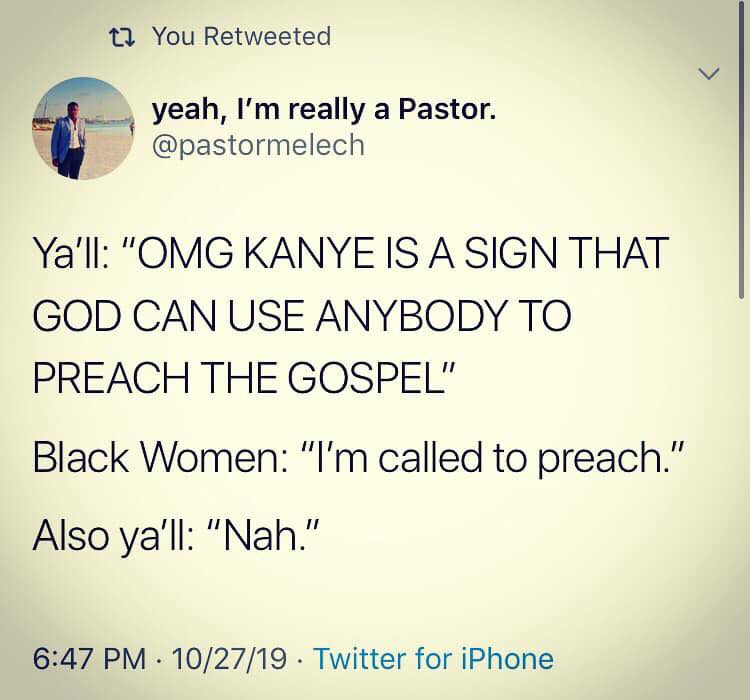 We have to talk about Kanye West and his sudden move to be a Evangelical Christian.

It’s been something of a weird week in Quiverfull Evangelical cultural enforcers. I’ve been watching the many people we cover here, and almost to a man the ones that are more attention-seeking are attempting to use the news of Kanye West’s sudden conversion to Christianity to promote themselves. As usual.

Which has made for some interesting commentary on their social media. Apparently their followers are not as in love with the idea of Kanye West as a crusader for Christ.

Many have said that while they appreciate Kanye stopping drugs, cursing, random sex, etc that Kanye will have to show he is serious. That time will tell by his actions. I think that’s a wiser view that jumping around rejoicing like some have done.

Lori Alexander, she of the recent Loritorium and from The Transformed Wife, is one of the attention seeker cheerleaders trying to exploit the news to drive more hits to her site.

There’s a couple of sad yet funny things about Lori’s sudden support of Kanye. First, many of her followers are people deep into the white supremacy world, definitely not the kind to like that he’s joined them. Secondly, we know from Lori’s many entitled posts devoid of anything outside of her rich gendered white world that if Kanye showed up uninvited on Lori’s lawn she’d have no idea who he was. She’d likely say “There’s the lawnmower, now get to it” or she’d call the police for him being black on her lawn. Lori likes to say she’s not prejudice at all, yet she pals around with the white supremacy crowd.

Enough about her, she’s just an example as to someone using the news to drive hits.

The one truly disturbing attention garden implement seeker quiverfull was Jim Bob Duggar adjacent – Jeremy Vuolo, husband of Jinger Duggar. Lately Jeremy has been posting a stream of Intagram and social media posts after they chucked ministry in Texas to move to Los Angeles, California. Constant photos of them with C-list celebrities and coffee shops in a move that seems tailor made just to promote self.

Yesterday Jeremy posted a series of videos on Instagram chiming in on the news of Kanye’s conversion. Jeremy talks of listening on repeat Kanye’s new music “Jesus is King”. He and Jinger went to see the film version of this, and most surprisingly attended Kanye’s church service on Sunday. That’s some prime inserting yourself into someone else’s conversion story for brownie points I’ve seen in years. Jeremy just might be playing the Duggar game better and more hardcore than Jim Bob himself.

Jeremy is excited because Kanye is being supposedly disciplined by a pastor from the Christian school Jeremy is attending in Los Angeles. Knowing which university, and knowing their theology tells me they are teaching Kanye the standard Evangelical Quiverfull version of life. It’s The Master’s University, the same place aligned with Dr. John MacArthur. One of my former pastors was a PhD student there, and we got to hear over the years what that university believed.

Watching Jeremy Vuolo’s video and listening to that self-important pompous voice is enough to turn anyone off Christianity for all time and eternity.

The other Duggar son in law Ben Seewald is acting like this is the greatest news of all time. But he’s not attempting to crash a church service, or going to the extremes of Jeremy.

Look, I get it, everyone loves a great road to Damascus story of seeing the light, finding Jesus. This has all the elements of that. A wonderful redemption story. Maybe.

Kanye West hasn’t exactly lead a life that makes one think of faith. His career has been ups and downs, changes that make me wonder sometimes if Kanye is experiencing some sort of untreated mental issues. Remember “Yesus”?

I wonder why the Vuolos and Ben Seewald didn’t lose it like this when teen idol Justin Bieber joined Hillsong United some time back? Less shocking or just more potential to gain attention by jumping on the Kanye bandwagon?

Hate to compliment Justin Bieber, but he’s been low key since his conversion. He’s seemed to be taking it seriously. I think that is what Kanye West is going to have to do to convince the bulk of Christianity that he has changed.

One thing is for sure, Kanye has a world of Duggar hanger oners and other Evangelical Quiverfull that seek to use him to further their own selves. Watching will be interesting and enlightening.