Last week we shared an older story about Duggar in-laws, the Wallers. It was the perfect Quiverfull story because it fully exhibited many of the things very wrong in that theology. You had white Christian entitlement, people that believed their faith made them superior to the laws and the legal rights of others, good clean Christian martyrbating, exhibiting and using of reproductive choices to manipulate others, and the beat goes on.

We barely touched upon it, and just like that it was scrubbed from the David and Priscilla Waller website.  NLQ is hardly the only ones to publicly remark on the story, and it’s been up for years now. What gives?

Thankfully a little thing known as the Wayback Machine had archived the pages, but not the photographs. We’re sharing the entire story here today to illustrate the many things so wrong in this theology. Screen caps of the site are forever. You have to mark your site for the robots not to crawl and take automatic screen shots. I am guessing David does not know this. Used to be the tag </norobots.txt> if I am remembering right. 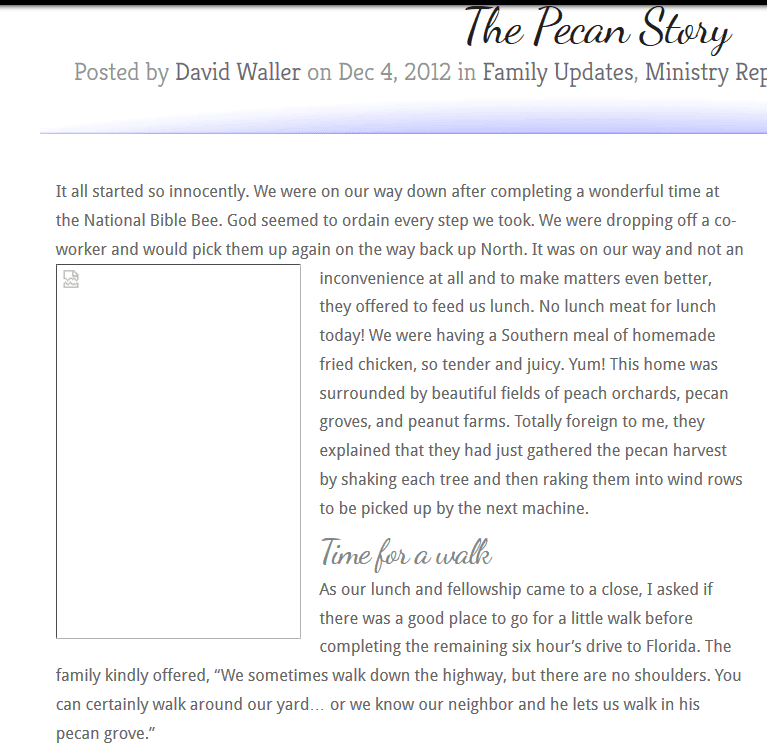 Guessing this would have put the Wallers in South Carolina or Georgia if it was roughly six hours into their part of Florida. Rural Georgia where peanuts, peaches and pecans are all grown, a place where strangers traipsing about your fields might just meet the business end of a shotgun.

So the hosts offered to let David and Priscilla walk around the neighbor’s pecans, along the windrows. Nice of them, and likely it would have been awkward had they returned from that walk with a bag of pecans. Questions would have been asked, or negative thieving opinions formed. Quiverfull is all about the appearance of rightness instead of actual outer display of the genuine inner person. 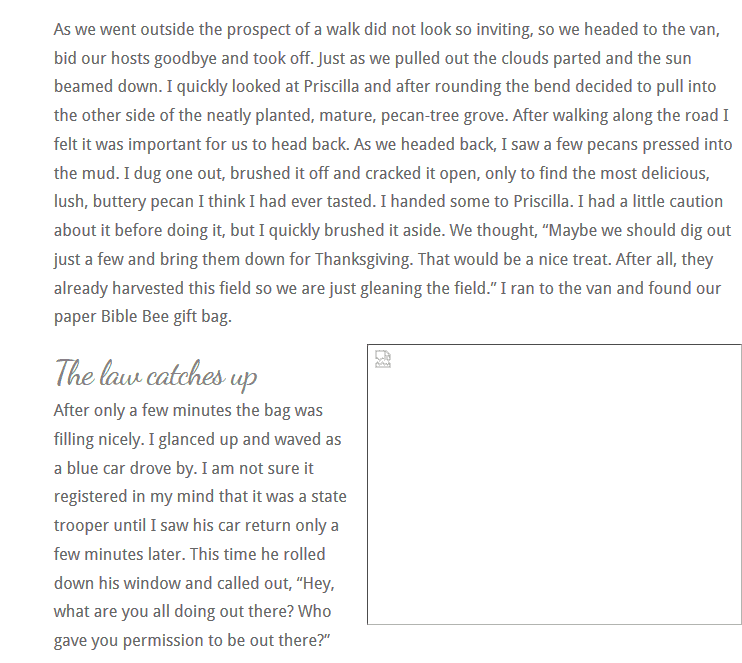 It’s one thing if you pick up one or two pecans squashed into the mud and eat them while walking. Most people would have no problem with that. It is a low level of thievery. but understandable. I would have been curious to see what it tasted like fresh too if I had never had a fresh pecan.

Notice David says he “had a little caution,” chose to ignore it, and soldier on. I love how in fundytown if it’s something that lines up with their own personal theology and legalism it’s the voice of God, and everything else popping into your mind is not. I would have thought if ever God spoke to you it might be as you were about to commit a crime.

Rural area + strangers + cash crop missing = cops every single time it happens in the daylight. This is stealing from the livelihood of others. This is how they support their families. Not a sideline, or a hobby. 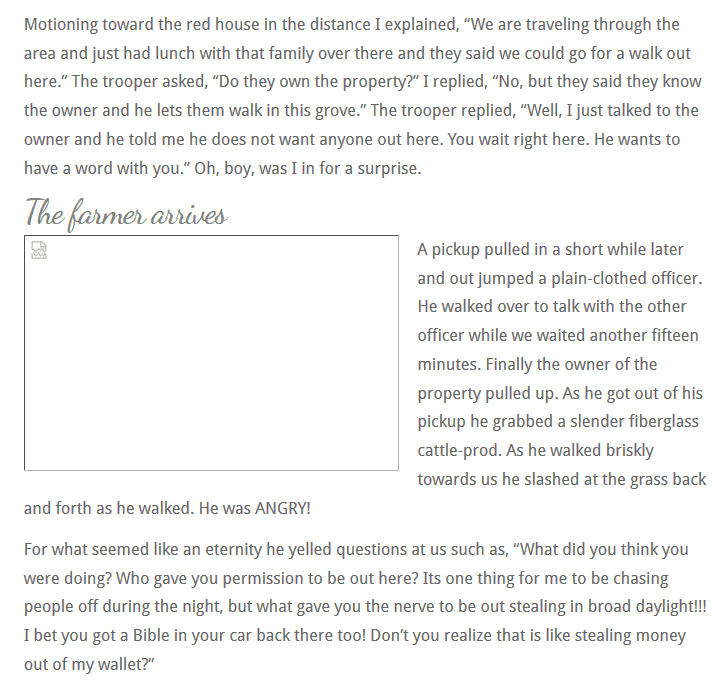 The farmer is angry. He has every right to be angry as the Wallers are literally taking food out of the mouths of his family in more ways than one. Cattle prod? He should have used it.

Plus this sounds like it was not his first tussle over nuts with Evangelical Christians who think they are exempt from the laws and rules of a polite, just society. 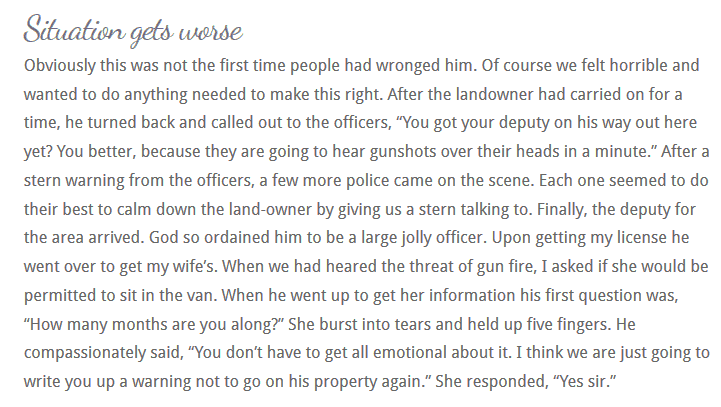 Great, using your own reproductive choices to try and play on the sympathy of the law enforcement officers. I’m sure they just wanted to deescalate the situation to keep the farmer for blasting them full of bird shot. Petty crime like this keeps them too busy to investigate felonies. How many officers were tied up on this nonsense that could have been avoided had they just driven up to the house and asked permission first? 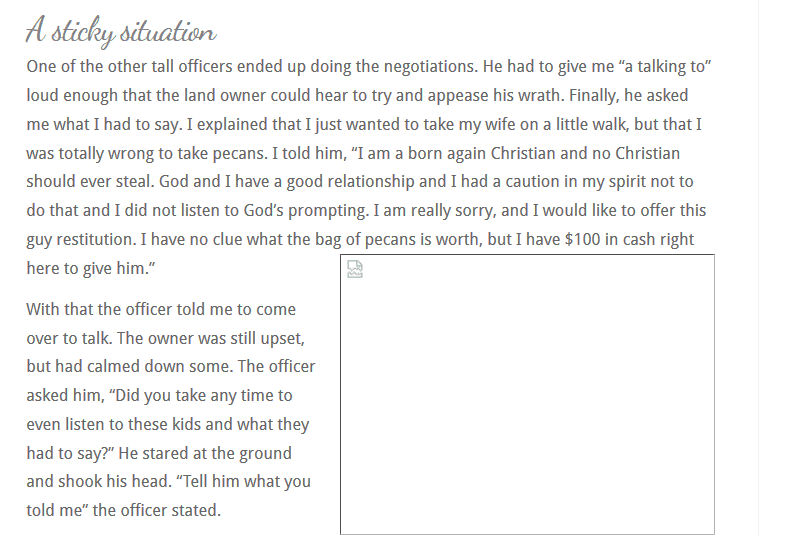 Being a Christian or a Satan worshiper, or a Buddhist or anything else has zero to do with this. David finally gets that he stole pecans, but is still in complete denial about his other crime – trespassing. As both Mel and I have stated in the comments the trespassing could have had much more serious consequences than a few pounds of pecans lifted.

The business of farming involves machinery and hazardous chemicals. What would have happened had they been out strolling on a day when the trees or pecans could have been sprayed to kill a fungus or for pests? Some of the pesticides used aren’t safe for humans.

Plus there are a million ways someone without the knowledge of a particular working farm can be injured. The liability would fall back on the farmer, who would now be responsible for your medical bills, driving up his insurance premiums.

The Wallers had no earthly business on that farm without permission. If they had taken the time to drive up and ask I don’t doubt that the farmer would have likely shown them around, and maybe even fronted them pecans.

That officer lecturing the owner? Never happened. I believe this is Quiverfull lying for Jesus to gloss over a bad wrong situation where the teller is entirely at fault. 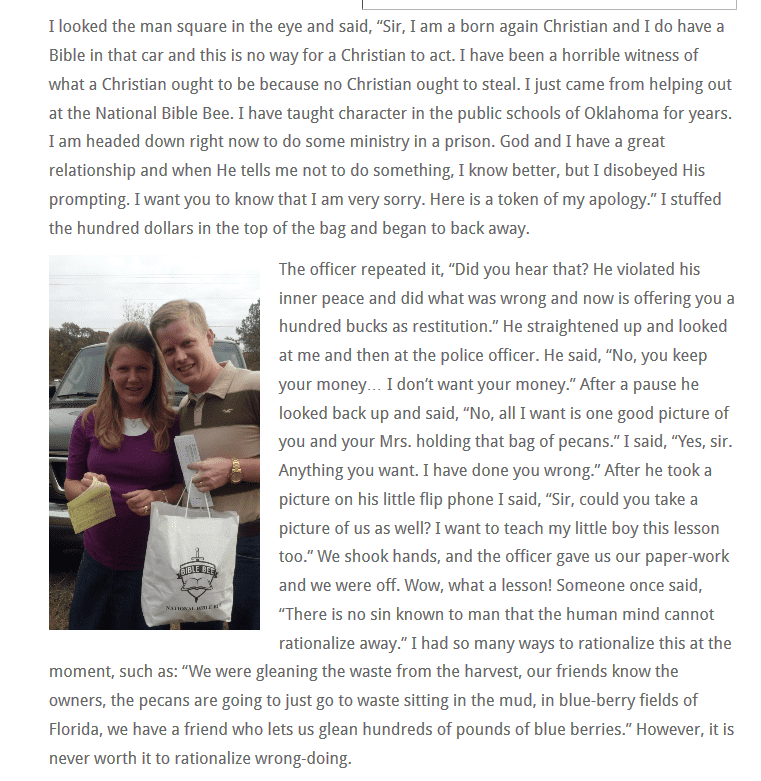 Does that bad scream “a few pecans”?

Most of this is likely fabrication. A little moralization by someone who thinks they have morals but it actually operating from a place of pride, with no real morals, rich white entitlement and a thousand other not so nice things.

About that hundred dollars… if you’re walking around with fat stacks of folding cash like that it might behoove you to head to the nearest farm stand and just buy some farm-fresh pecans. The produce stands are everywhere in areas where things grow. I’ve seen them in that part of the world. Waller should know living in Florida where the “Fresh Oranges” stands are along all major highways.

See the neat windrows of pecans and pecan trees, sigh and say “How beautiful!” and then head to the nearest fruit stand. Simple. The farmer gets paid without a risk to his trees or insurance, or your life. You get fresh delicious pecans without risking jail time or a fine or injury. Everyone is happy, everyone except those types like the Wallers that must martyrbate and turn every unlikely scenario into a sermonette with them as the most righteous at the end.

Yeah, well, interesting that they don’t share exactly what their take  away was more than telling those prisoners to always listen to God.

The real takeaway should have been:

But I’m sure that’s not what they learned. It is interesting their timing in removing this page from their blog David Loves Priscilla.

November 14, 2019 Derick Dillard - Loose Lips Sink Duggar Ships
Recent Comments
70 Comments | Leave a Comment
"This is late, partly bc of my preoccupation and partly bc I'd been slowly reading ..."
Jennifer Serena’s Serenity – Luxury Hotel, Birthing ..."
"Thank you for your commitment to truth and love, Suzanne. Best wishes to you and ..."
Meredith Anne Not a Goodbye, More of a ..."
"For what it's worth, I've learned a lot from you about a Very Creepy movement ..."
Gwen Pryce Not a Goodbye, More of a ..."
"Unfortunately, this kind of satire (if it even is satire) is what gives Christianity the ..."
Emily Is Biblical Gender Roles a Big ..."
Browse Our Archives
get the latest from
Nonreligious
Sign up for our newsletter
POPULAR AT PATHEOS Nonreligious
1