One thing is for sure, Larry Solomon of Biblical Gender Roles as taken up the flag of the men’s rights activists and is trying to shoehorn their views into his own. Larry is talking of “Frame” today – translation for regular folks, the established framework you do not have to keep discussing that happens in most marriages. The agreed upon direction of your lives. Fundies love to call it “World View” But most marriages do not run “Frame” like  some sort of weird, weak, wimpy guy feeling threatened by every aspect of his wife, like these guys  do.

We start with this  quote from the red pillin’ blogger Rollo Tomassi:

“In psych terms, frame is an often subconscious, mutually acknowledged personal narrative under which auspices people will be influenced. One’s capacity for personal decisions, choices for well-being, emotional investments, religious beliefs and political persuasions (amongst many others) are all influenced and biased by the psychological narrative ‘framework’ under which we are most apt to accept as normalcy…

One important fact to consider, before I launch into too much detail, is to understand that frame is NOT power. The act of controlling the frame may be an exercise in power for some, but let me be clear from the start that the concept of frame is who’s ‘reality’ in which you choose to operate in relation to a woman. Both gender’s internalized concept of  frame is influenced by our individual acculturation, socialization, psychological conditioning, upbringing, education, etc., but be clear on this, you are either operating in your own frame or you’re operating in hers“

Wow, living in a life where you have to control others in order to get your way, calling it ‘Frame’ sounds exhausting. While boundaries are important in marriage and these are all things you need to work out as a couple before you marry, one person controlling the other just leads to disaster, be it husband or wife. These silly immature tantrumming males are unsafe at any speed for anyone.

“Later in the same post he states “Her genuine (unnegotiated) desire for you hinges upon you covertly establishing this narrative for her”.   Basically, he is saying the man should bring the woman into his frame without her knowing he is trying to bring her into his frame.  Essentially Tomassi is calling on men to perform the Red Pill equivalent of Jedi mind tricks on women. “

“According to Red Pill, if a man attempts to bring a woman into his frame (i.e. worldview) by overt or coercive measures he defeats the central focus of Red Pill ideology – to get a woman to have “genuine (unnegotiated)” sexual desire toward him.”

That is not how sexual desire works! It’s not a matter of manipulating a woman in any way. Part of it is chemistry and attraction and the other part is DO NOT BE A MALE SEXUAL ORGAN IN YOUR BEHAVIOR  TOWARDS HER! It really is that simple. You want regular sex? Don’t act like an anus.

“In most contemporary marriages and LTR arrangements, women tend to be the de facto authority. Men seek their wive’s “permission” to attempt even the most mundane activities they’d do without an afterthought while single. I have married friends tell me how ‘fortunate’ they are to be married to such an understanding wife that she’d “allow” him to watch hockey on their guest bedroom TV,…occasionally

What these men failed to realize is that frame, like power, abhors a vacuum.  In the absence of the frame security a woman naturally seeks from a masculine male, this security need forces her to provide that security for herself.”

Here is the thing I do not ‘get’ The most obvious thing. Why are these people not talking to each other? Why no basic consideration for each other? In this egalitarian household if I come into the bedroom to watch tv and the husband is laying on the bed reading, or napping I will ask “Hey, do you mind if I watch ‘World’s Dumbest Gringos’ or ‘My Big Fat Jailhouse Bar Mitzvahs’?” and if he says yes he minds I shift my television viewing to another room.  I get the same question from him, “Would it bother you if I watch ‘The Three Stoogies’ or the Impeachment hearings?” and he also will abide by my wishes.

This is basic human respect for the other person. It’s not linked to genitals. It’s having consideration for your partner. Basic, basic stuff that these clueless guys do not understand.

Larry goes on to state that Tomassi is wrong only in one thing, using covert means, manipulation to bring the  woman in line with the weak male’s wishes. But then he goes here, and it sounds like more of the same garbage just dressed up in a different gift wrap. This is also manipulation, Larry-style:

I have a friend of mine whose son recently married. But before he married his wife, they had kind of a rocky dating relationship. They actually broke up twice before getting back together a third time and then getting engaged and eventually married.

The reason they broke up is because his son was establishing his frame during the dating relationship, his Christian world view, including his belief in Biblical gender roles and the man being the head of the woman in all things. If she would rebel against his leadership on any issue, he would send her away and wait for her to come back and repent. Each time she attempted to take control of the frame or really the worldview under which their relationship would operate, he would remind her that as a couple they would operate in his worldview or they would not be a couple at all.

Red Pill is right that women deep down want men to establish the frame of their relationship. Some women will of course test the man’s resolve but eventually submit to his worldview. But where Red Pill is wrong is that this is not true for all women. There are some women who will constantly battle to control the frame of their relationship with a man. And some will not reveal their true intent to control the frame until after marriage.

And just like that I cannot take any more toxic Larry for today.

Please, if you take nothing else away from this just talk to your partner, learn to be considerate of each other and get the heck away from controlling and manipulative men.

Today there has been subtle racism: 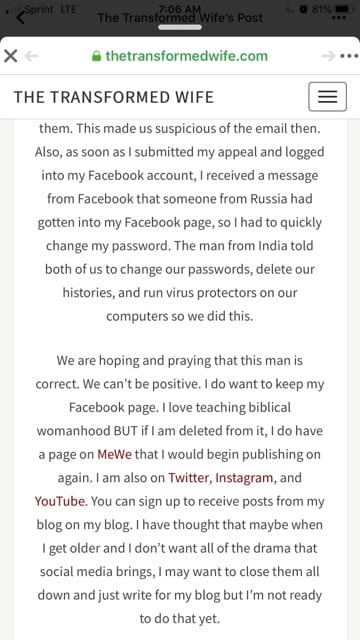 and a number of folks calling her out for lying over the entire thing: 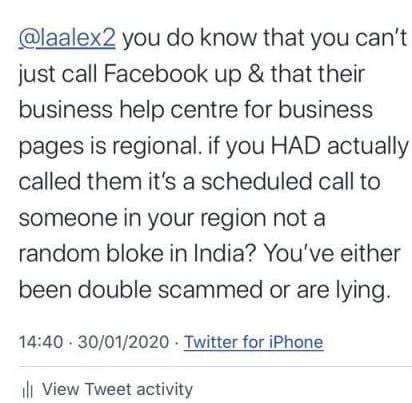 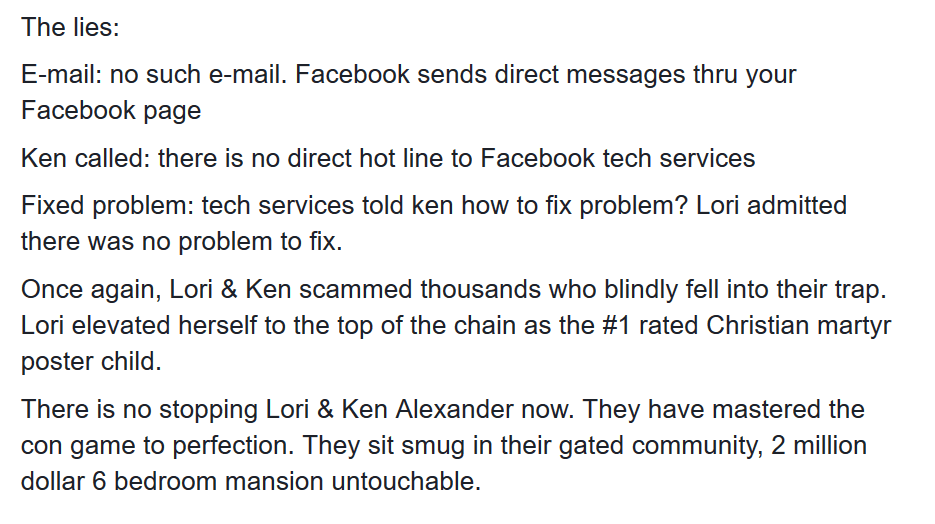 Kind of says it all. Lori lies.

January 29, 2020
Lori Alexander and the Terrible No Good Day: When Facebook Decides You Are Toxic
Next Post

January 31, 2020 The Rodrigues Family, Missioncations, and Flouting Homeschooling Laws
Recent Comments
56 Comments | Leave a Comment
Browse Our Archives
get the latest from
No Longer Quivering
Sign up for our newsletter
POPULAR AT PATHEOS Nonreligious
1