Yesterday President Trump announced that he was assigning the task of dealing with the looming threat represented by the Corona virus to Vice President Mike Pence. This is all well after our president got rid of the team that deals with emerging pandemics and stripped a large amount of funding from the Center for Disease Control. Actions of a man clearly not interested in public health in any way.

I kept thinking about this most of the evening yesterday after it was announced the first case of ‘community spread’ of the COVID19 had happened in California. This is the first time that there has been a transmission of unknown origin of the virus in the U.S.

Yesterday night I did my weekly grocery shopping in a place filled with American tourists, likely some from that area, and I could not help but worry and be concerned. While there’s not been a case diagnosed in Costa Rica it is likely going to happen eventually. This is high tourist season and the area is chockablock filled with Americans, Chinese, Japanese, Italians and people from around the world.

So what’s the deal with Pence? Why am I even mentioning this. For several reasons.

First, Pence belongs to a church that was affiliated with my old Quiverfull church. Their theology on sickness is that most people bring on their own illnesses, and that prayer is the only effective means of healing, much more so than going to the doctors. Illness is viewed as “God’s punishment” more than shifting bacterial strains, or genetic predispositions. It’s all your own fault! Generation sin is blamed, so is the wrong thought life, rebellion and many other things that simply are not true.

When you substitute prayer only for health care people die. Pence has already proven his track record of mixing his faith in with the realities of  health care. As governor of Indiana he drug his feet on actions to stem the rise of HIV cases and a large ratio of folks in his home state ended up being diagnosed with new cases of the disease. He suggested prayer only.

At the same time Pence went way out of his way to try and shut Planned Parenthood down in Indiana at a time when PP provided testing for HIV. It was one of the most drastic spreads of HIV in the nation based upon percentages.

Mike Pence is in no way a public health expert. When he’s been involved with public health crises people suffer. So what does our president do? Appoint him to oversee the looming crisis. Trump is in serious denial over the threat, so he appoints the least effective person in his administration to do something about it. But what did we expect from someone who confused Ebola and Corona Virus in his speech yesterday?

I predict that the administration is going to use this emergency as a means to further restrict immigration and as the justification for closing our borders, while people die from prayer and lack of treatments.

What can you do to prevent catching and transmitting the virus? The same good protocols we use during influenza outbreaks, copious hand washing, using sanitizing disposable wipes on things like shopping cart handles and doorknobs in public, masks in crowded public places and doing what you must to keep you and your immune system healthy. Try to stay well. Practice good hygiene.

Speaking of poor hygiene, a quick note on the latest Nicole Naugler controversy. Originally I was going to write about what’s happening in Nauglertown, but why give Nicole her jollies. She’s embroiled in an internet-wide fight with the world after she posted photos on her blog and Facebook page of her young daughter’s “dreadlocks”. I saw the photo everyone is outraged over and it looks like one giant unwashed dreadlock, like what happens when someone neither washes or brushes their hair for months on end. Like a “Hello, CPS” type situation.

Judge for yourself. Here’s a screen cap from one of the Facebook sites discussing the dreads. 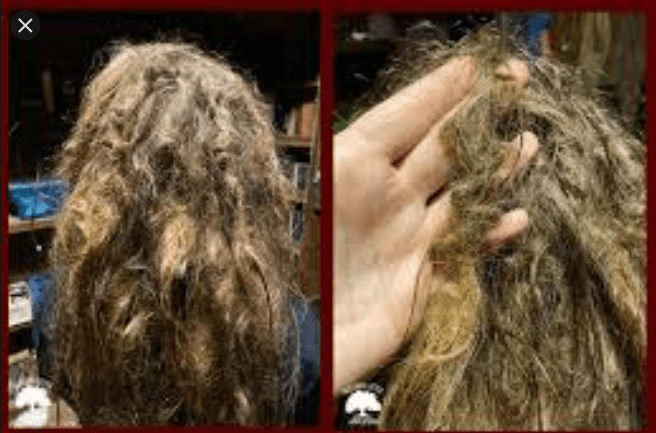 Lazy parenting or a valid cultural response? You decide.

A quick look at Nicole’s blog and Facebook show she’s doing a more extreme version of what many QF cultural enforcers do, deliberately trying to whip up attention by any means possible. I think she likely thrives on negative attention. Why else would she have directly contacted me 3 years ago demanding I interview her and tell her real story? Sorry, I do not feed what seems like mental issues. There will be no Naugler interviews here.

Yesterday Nicole said she is personally suing me for a piece I wrote well over a year ago that’s been freely available and Google-able for that time. Here’s the deeply darkly comedic aspect of that. She was slipped the easily findable links by one S Curre, who appears to be Lori Alexander’s husband Ken. Ken is likely lurking under a fake troll name on Twitter S Curre. Classy.

I decided that Ken was likely S Curre after seeing a flood of postings.

February 28, 2020 Don't Find Yourself?
Recent Comments
68 Comments | Leave a Comment
Browse Our Archives
get the latest from
Nonreligious
Sign up for our newsletter
POPULAR AT PATHEOS Nonreligious
1