Girl Defined – My Great Grandpa Was a Nazi and All I Got Was This Lousy Tee April 24, 2020 Suzanne Titkemeyer

I have to admit I did Nazi this coming!

We have not taken much of a look at the Girl Defined sisters Kristen Clark and Bethany Beal in quite some time. It’s hard to talk about their ministry, their theology and their selves because so much of what they do and say seems so incredibly vacuous, clueless and self impressed.

Remember the time they both made claims about how they could have been super models but they had too much morals and Jesus to do that. They completely ignored the fact that neither of them had the right body type for high fashion modeling, or the looks.

Their puerile ravings come across as the giggling of inexperienced teenyboppers living in a sealed little bubble, not grown women with children and husbands. I stopped covering their articles because of the level of clueless immaturity in their writings and videos. Dear Mr. Atheist  aka Jimmy Snow has taken up the Girl Defined torch and he regularly does videos featuring their selective ignorance. I love him and his beautiful head of hair. Go, Jimmy, go!

But it is that lack of all sense, of self awareness,  that cluelessness and entitlement that I have to talk about today. It is breathtaking how crazy it has gotten lately. But it’s mostly been harmless, like the girls talking about how trashy the farmer overall shorts look is before Bethany starts wearing them all the time. Not a clue.  Last night in one of the groups I am a member of someone posted photos and information on a trip Bethany took to see her great grandfather’s village and grave in Austria. 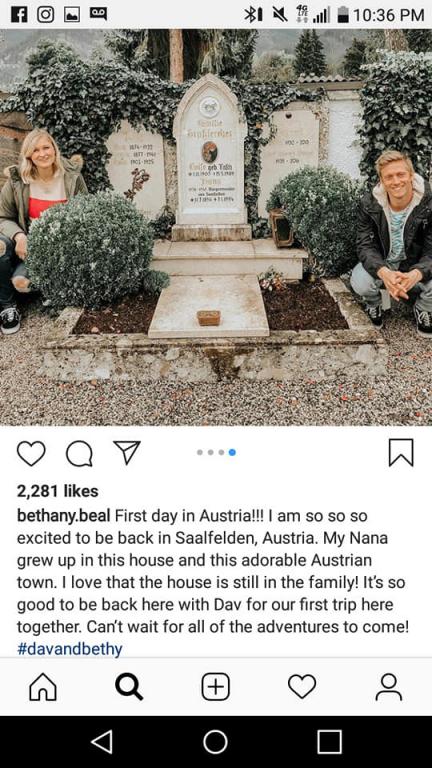 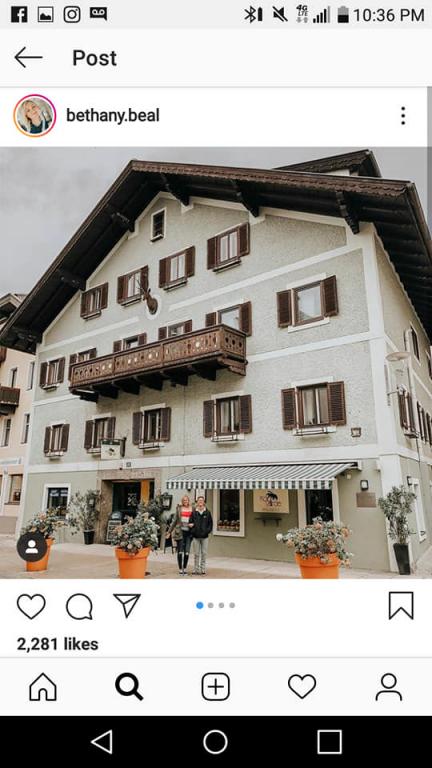 Sweet house! Oh, how nice they are off tracing family history. 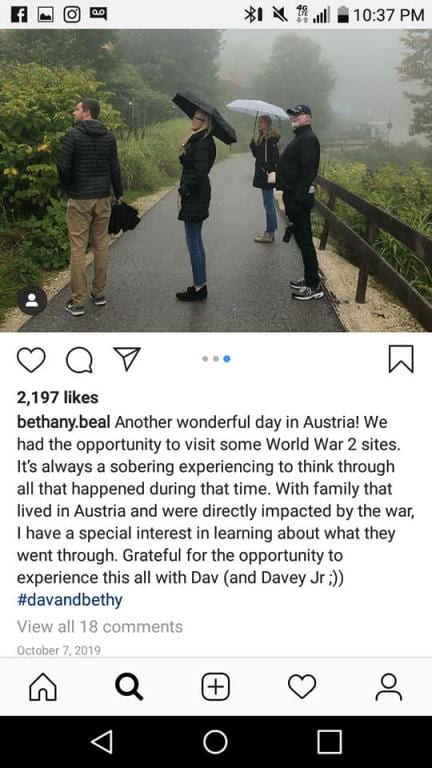 There’s just one problem with all of this, and her very lightly touching upon World War II. It’s something she’s not mentioning that does deserve at least a “Yeah, what great grandpa did was wrong, and I’m sorry for his part in history.” But since we are talking of two of the most shallow and thoughtless cultural enforcers in this branch of Evangelicalism we’re not going to get that. Here’s what Bethany isn’t saying.

That village  her family is from, Saalfelden, Austria, and her great grandfather, the mayor or burgermeister, Johann Grosslecher, and their involvement with Germany’s Nazi party and the policies of one Adolph Hitler. The town welcomed the Nazi’s by throwing Hitler a parade! 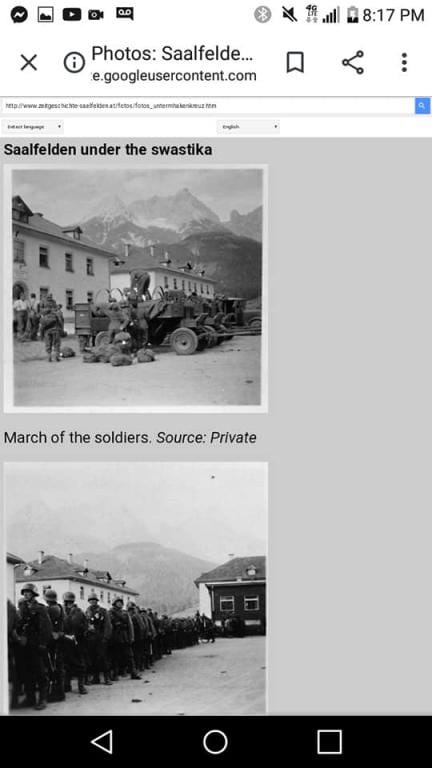 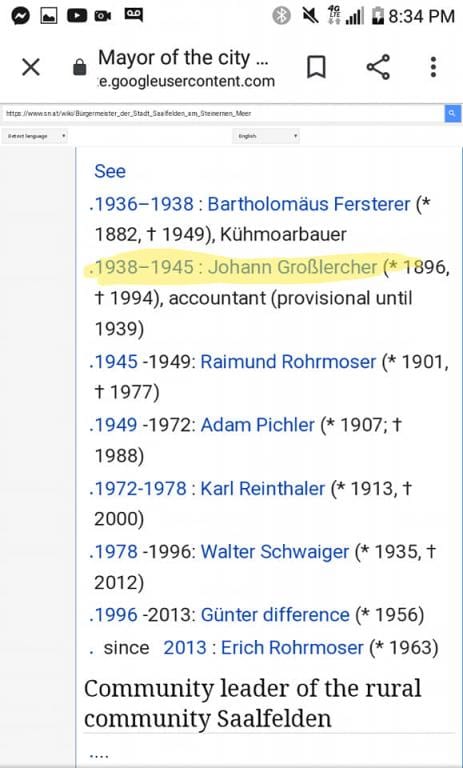 Clearly this is Bethany and and Kristen’s great grandfather, the dates on the tombstone and the records that can be easily accessed online line up perfectly with birth, death and dates of his service as mayor of Saalfelden.

Johann joined the NSDAP (National Socialist German Workers Party) in 1925, early on, and was very involved with their activities, even as the party was banned from Austria and it was illegal to be a member. He was arrested many times for participating in Nazi rallies right up until the Anschluss. The Anschluss was when Nazi Germany annexed neutral Austria, and turned it into another Nazi state.

The Anschluss happened on March 12, 1938. A mere six days later Johann was appointed mayor of Saalfelden, likely as a party payoff for being an early loyal member. Being a native of Saalfelden he would have absolutely known who was Jewish, who was some other undesirable to the Nazi party, and participated in rounding up and shipping those folks to work camps like Dachau, or Auschwitz. When Kristallnacht happened he would have signed off on consigning all remaining Jews to the concentration camps.

At the end of the war Johann was stripped of his office, and a reformer by the name of Raimund Rohrmoser was appointed. Rohrmoser involved himself in a program of reunificaton, restoration and removal of all that was from the Nazi party.

Look, I know we cannot pick our relatives. I have alcoholics, a few murderers and other miscreants in my own blood line, along with one of the earlier Methodist circuit riders in South Louisiana that went from church to church in a pirogue (small wooden Cajun canoe). I’m not proud of the bad behaviors. But at the same time knowing, the good, and the bad, of our families is part of who we are. They did nothing as monstrous as order the deaths of others, but only because they were powerless poor shrimpers and boat builders on the bayou.

It would seem to me if you had a relative that participated willingly in something so monstrously evil and wasn’t brought to trial in Nuremburg you might be saying something more than ‘sobering experience’ or ‘special interest in learning.’ You might think it best to renounce his heinous actions, and to speak out against the horrors of that time. Particularly someone that claims to be Christian would be grievously affected by this history. Acknowledge the role played, and express sorrow. It’s just that easy.

One of the places I visited during my years living in Germany was Dachau. Although I have no family members directly affected that I know of beyond a few cousins that fought in the war visiting the camp was profoundly disturbing on so many levels. Seeing a small camp and realizing the sheer overwhelming amount of death that came out of that place was shocking.

But you have to be self aware enough to actually realize these things, and to learn from past history.  Clearly neither Kristen or Bethany has learned. Living life in the cult like bubble, not learning a thing from history.

If you’re going to comment here and use the word “Nazi” you will need to add a letter to bypass the filter.

April 24, 2020 Open Thread Covid 19 - What the Heck is Wrong With Trump?
Recent Comments
0 | Leave a Comment
"This is late, partly bc of my preoccupation and partly bc I'd been slowly reading ..."
Jennifer Serena’s Serenity – Luxury Hotel, Birthing ..."
"Thank you for your commitment to truth and love, Suzanne. Best wishes to you and ..."
Meredith Anne Not a Goodbye, More of a ..."
"For what it's worth, I've learned a lot from you about a Very Creepy movement ..."
Gwen Pryce Not a Goodbye, More of a ..."
"Unfortunately, this kind of satire (if it even is satire) is what gives Christianity the ..."
Emily Is Biblical Gender Roles a Big ..."
Browse Our Archives
get the latest from
Nonreligious
Sign up for our newsletter
POPULAR AT PATHEOS Nonreligious
1