Donald Trump ‘Talks’ to God and the Democratic Convention 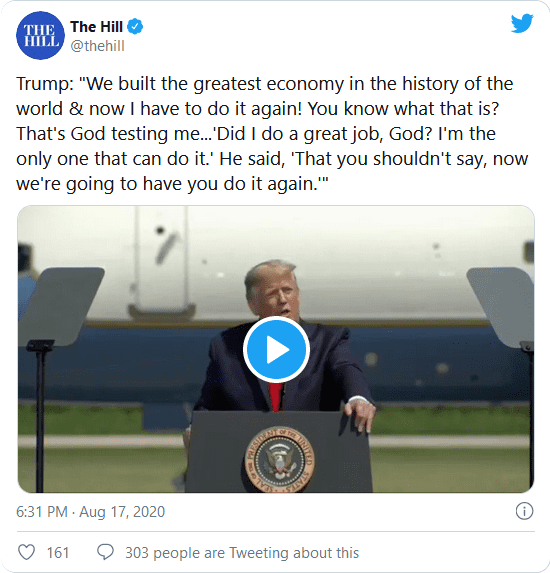 We have to talk about this, Donald Trump’s statements yesterday of his conversations with God. Here’s what he claims he and God said:

“What we achieve together, and what we’re together is nothing short of an economic miracle, and now we’re doing it again.

We did it. We built the greatest economy in the history of the world, and now I have to do it again.

You know what that is? That’s right. That’s God testing me. He said ‘you know, you did it once’ and I said ‘Did I do a great job God? I’m the only one that can do it.’

But I did it once, and I’m doing it again. and you see the kind of numbers we’re up, they’re unbelievable. Best job numbers ever.”

Direct quotes from the President of the United States that sound dementedly delusional. The jobs rate did rise, but from a pitiful number impacted by the pandemic. This is no victory for Trump, but in his simplistic non-thinking way he’s spinning it as a yuge victory.

After reading Mary Trump’s book “Too Much and Never Enough” and the foreword to Michael Cohen’s upcoming book “Disloyal” I can only conclude it’s at best the imaginations of a sick mind, or the calculated manipulations of a liar. Trump no more heard from God than a toad can comprehend Italian opera.

This is a perfect example of his Evangelical supporters reasoning skills as well. Huge death numbers, unbelievably high rates of COVID 19 infections, an artificially inflated stock market, and we’re hated and reviled in much of the world because of his actions. Yet many Evangelicals worship this man, and believe every word dripping from his lips.

Last night I watched the start of the Democratic National Convention from the air conditioned splendor of my bedroom here in Costa Rica. I was happy to see former Ohio governor John Kasich step up to speak for Joe Biden along with a handful of other Republicans. I enjoyed the speeches by Bernie Saunders and others, including the mike drop moment speech by Michelle Obama, wife of former president Barack Obama.

Here’s where the convention and Trump’s own recent words scare the willies out of me. There was a tremendous amount of Trump bashing going on last night. I’m not saying it is not warranted, because his actions in office have been dangerous for all of us. It’s understandable, but I fear it just causes his base to double down.

But we need to keep in mind that by indulging in this type of language and rhetoric we’re reinforcing his base. His largely Evangelical, Fundamentalist, Quiverfull, Christian base that buys every single word dropping from his mouth about God and everything else. This is the danger of attack mode, it just entrenches them even deeper into that good Christian martyrdom place they love.

I hope I am wrong, but I fear this will merely ensure a second term for Donald Trump, and as Michelle Obama said, God help us all. Will continue watching the convention tonight.