‘Cuties’ – Tempest in a Quiverfull Teapot or Tacky Child Exploitation?

If there is one thing you can count on in Quiverfull it’s that something even slightly risque is going on it summons the “End of the world as we know it” brigade. This time led by a increasingly histrionic she who may not be mentioned here. Why? Over a Netflix film titled “Cuties” that was released mere days ago. It’s blowing up the internet and people are fighting, not just in Quiverfull Evangelical circles, but even places like 4Chan, Reddit and  way outside of religious circles. Seems like you either think it is borderline child pornography, or it’s empowering. There does not seem to be many opinions out there that are not one of these two polar opposites. 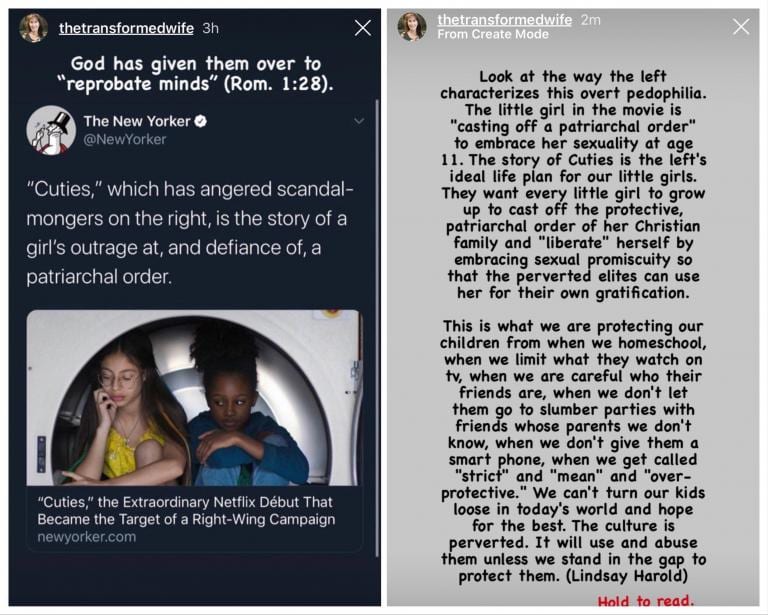 Disclaimer: I haven’t seen “Cuties” and I seriously doubt Lori has either. I plan on rectifying that this afternoon since it’s raining here and I have time. Lori is apparently losing her mind, along with everyone else in Evangelicalism, over the skimpy dance outfits, dancing and the entire idea that the film rejects ‘Patriarchy’. She never mentions the fact that the film is more about poor immigrant families in Paris, polygamy, the repression of women by Muslim culture, the hypocrisy of modesty culture in a sexualized world and so many other things. The film won an award at the Sundance film festival so I doubt it is entirely sexualized trash.

I am withholding judgement on what I think until I’ve viewed the film. One of the things about Evangelical Quiverfull is that no one examines a thing to see if there is any value, it’s all make assumptions based on scanty knowledge. The film might just be a smutty piece of detritus focused on the sexualization of 11 year old girls, or it might be something else. No way of knowing for sure until I view it.

One thing I do know, the dancing and costumes are very reminiscent of Lifetime Television’s “Dance Moms” Anyone remember an episode titled “Topless Showgirls”? No?

In the children’s dance world, for better or for worse, revealing costumes and provocative dance moves aren’t unusual in an effort to stand out from the crowd. It’s part and parcel of the slide towards sexualizing children in our society that I abhor.

But not all dances are this sleazy and revealing. I watched all 7 seasons of “Dance Moms” because I took dance for ten years as a kid myself, and I’ve always enjoyed dancing. The little girls dancing was the least problematic part of the show, a show that featured a screaming maniac as a teacher, and parents living sickeningly vicariously through daughters and sons.

But even “Dance Moms” sometimes got it right. This piece titled “Where have all the children gone?” highlights children being preyed upon by dangerous others.

Here’s another great dance inspired by the suicide of a teen they all know. I loved watching all the dance performances. Dance is such a beautiful powerful expression of emotions.

Remind me again why defeating patriarchy and hyper modest standards is so wrong?

September 11, 2020
The Insane Clown Posse and Steven Anderson
Next Post

September 12, 2020 Cuties - The Dancing is Not the Main Point of the Film!
Recent Comments
0 | Leave a Comment
"This is late, partly bc of my preoccupation and partly bc I'd been slowly reading ..."
Jennifer Serena’s Serenity – Luxury Hotel, Birthing ..."
"Thank you for your commitment to truth and love, Suzanne. Best wishes to you and ..."
Meredith Anne Not a Goodbye, More of a ..."
"For your sake, I am so glad you will no longer be editing and managing ..."
Lana Not a Goodbye, More of a ..."
"For what it's worth, I've learned a lot from you about a Very Creepy movement ..."
Gwen Pryce Not a Goodbye, More of a ..."
Browse Our Archives
get the latest from
Nonreligious
Sign up for our newsletter
POPULAR AT PATHEOS Nonreligious
1