Recently my husband and I ended up fighting on and off all weekend about (of all things!) housework. The argument went something like this:

He said: The house is so messy right now.

I heard: You are falling down on the job.

I said: So you wish we were back in the patriarchal model and everything were sparkling when you walked in the door?

He heard: So you’re are a misogynist pig?

Re-phrase and repeat for several hours of nitpicking each other.

We hadn’t really fought in months, but after a long trip, and a flurry of church activities and a few illnesses thrown in for good measure, we were both exhausted. That type of tiredness that sticks around even after a full nights sleep.

It’s funny how the old tapes com rushing back whenever we clash over housework. If he even mentions that something is messy, I feel instantly insecure and angry at myself for not keeping up with it. We both have old phrases and ways of talking about things that trigger the old gender roles and resentment. I get defensive, he gets angry. I get angry, he gets hurt. And instantly I doubt myself, what if I’m wrong and all the old beliefs are true. To keep our home calm and strife free, maybe I really am supposed to keep the whole home up and running, rooms clean, laundry kept up, meals planned and on time. Then my husband could come home and be free from stress, able to relax and put up his feet after a long hard day of work. Except… then I remember that those teachings were wrong. When we adhered to the patriarchal roles we fought more than ever, and I was even more tired. 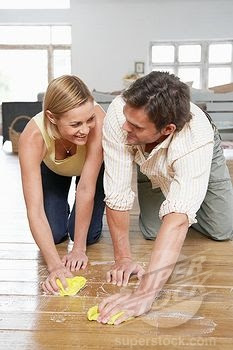 Truth is, we are doing so much better now than we were then. We have had very little practice seeing each other as true equals, we’ve only been at this for the last 2 years, and it’s been a lot of trial and error along the way. Sometimes I get so frustrated with myself for repeating old patterns, falling back into old beliefs and self-hatred. I get so fed up with the now. Sometimes it feels like this is never going to get easier, like I am going to be fighting guilt over allowing my husband to help around the house for the rest of my life.

But, I know that isn’t true. We have been getting better at this. My husband changes diapers now, and he’s learning how to do laundry. I’m getting better at asking for help when I need it, instead of shaming myself into doing it all. I get up with the babies all night long, but then he wakes up with them in the morning at dawn and I sleep an extra hour. Our communication skills continue to improve. And sometimes it seems like we need to fight a little just to re-assert our mutual goal of being equals.

Sometimes at the end of a long day I still find myself apologizing that I am behind on the laundry and I’ve left the baking pans on the counter for almost a week now. And then my husband reminds me that caring for the home is both of our responsibility. We both work during the day, he goes to his office and I care for our 4 children. And then at the end of the day we have family time and we tackle the house together. The housework is both of our responsibility, if I can get some of it done during the day, great! If not, that’s OK too.

When we eliminated the artificial gender role blueprints from our family, we had to figure out what worked for us for the first time. It was so scary to drop all the ideas about marriage that we understood as mandatory for a good relationship. Even though those ideas weren’t really working for us, what if abandoning them meant our marriage couldn’t last? But we’ve more than lasted, we’ve thrived. It’s meant that he has to be accepting on the days he comes home to a disaster, and I have to be OK with him accidentally throwing my bra in the dryer.We work as a team, (an imperfect team, but a team) juggling kids and housework together. He is just as capable a parent as I am, and somehow all the housework gets done, even if sometimes we catch up on the weekends. Now we have communication instead of expectation, and that makes all the difference.

November 12, 2011 Babies, Duggars and Me
Recent Comments
0 | Leave a Comment
"e"
Psycho Nautilus Untitled
"As a new mom, even if my daughter is a toddler now, weaning is really ..."
Lynn Toh Weaning my Tandem Nursed Toddler
"So, I came across this post for the first time today, two years after it ..."
Sheila Warner Finally Heard? The Duggar Aftermath
"Just wanted you to know that I keep checking occasionally for updates, and I hope ..."
William Burns Brave New Life: Part 7: The ..."
Browse Our Archives
Related posts from Permission to Live