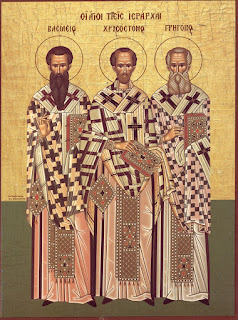 Arianism, simply defined, is the belief that Jesus Christ was not equal with God the Father, but was a created being. In the fourth century the Cappadocian fathers, St Basil and St Gregory of Nazianzus (along with Basil’s brother Gregory of Nyssa and John Chrysostom), fought against Arianism.

Because we celebrate the memorial of Basil and Gregory Nazianzen today it is worth examining the heresy of Arianism today. Heresies are like weeds. They keep coming back. The thing is, they come back in different guises. In the fourth century Arianism was part of the great debate over the divinity of Christ and therefore the definition of the Holy Trinity.

Today Arianism takes a different form, and comes to us in the guise of humanism. By ‘humanism’ I mean that belief system that takes man as the measure of all things. This humanism is a conglomeration of different modernistic beliefs, but the summary of it all is materialism– that this physical world is all there is, human history is all that matters and the advancement of the human race in this physical realm is the only thing fighting for.

Arianism today is an interpretation of Christianity according to this whole materialistic, humanistic philosophy. Clearly, Jesus Christ as the Divine Son of God and the co-eternal second person of the Holy Trinity doesn’t really fit. Instead Jesus is a good teacher, a wise rabbi, a beautiful example, a martyr for a noble cause. At most he is a human being who is “so fulfilled and self actualized that he has ‘become divine’.” To put it another way, “Jesus is so complete a human being that he reveals to us the divine image in which we were all created–and therefore shows us what God is like.” There is a sense in which this “divinization” happened to Jesus as a result of the graces he received from God, the life he led and the sufferings he endured.

This watered down Christianity is our modern form of Arianism. The cultural context of the heresy and it’s expression is different, but the essence of the heresy is the same as it always was: “Jesus Christ is a created being. His ‘divinity’ is something that developed or was added to his humanity by God.”

The difference between Arius and the modern heretics is that Arius was actually explicit in his teaching. The modern heretics are not. They inhabit our seminaries, our monasteries, our rectories and presbyteries. They are the modernist clergy who dominate the mainstream Protestant denominations and who are too many in number within the Catholic Church as well.

Many of them don’t even know they are heretics. They have been poorly catechized from the start. Their beliefs about Jesus Christ have remained fuzzy and out of focus. They hold their beliefs in a sentimental haze in which they vaguely feel that what they believe is
“Christian” but would not want to pin it down too much. This is because they have been taught that dogma is “divisive”. They deliberately keep their beliefs vague, and focus on “pastoral concerns” in order to avoid the difficult questions. They have been taught that dogma is part of an earlier age in the church and that we have matured and moved on from such nit picky sort of questions. “God, after all, can’t be put into a box. He’s bigger than all that…”

Nevertheless, they feel totally at ease reciting the Nicene Creed every week and celebrating the Nativity of the Son of God and the great Paschal Triduum–using all the words of traditional Nicene Christianity, while re-interpreting those words in a way that would please Arius. So when they speak of Jesus Christ the Divine Son of God they really mean what I wrote above–“That in some beautiful way he was such a perfect human being that he reveals to us what God is like.”

The Virgin Mary then becomes “A good and pure Jewish girl who dealt with her unplanned pregnancy with great courage and faith.” The crucifixion becomes “The tragic death of a young and courageous fighter for peace and justice”. The resurrection means that, “In some mysterious way, by following his teachings, the disciples of Jesus continued to believe that he was alive within their hearts and within history.”

Now what really interests me is that these modern day Arians (and I’m sure the same could be said of the fourth century version) are not wicked and filthy sinners. They’re nice people. They’re articulate, educated people. They’re well off people. They’re well connected people. They’re good, solid respectable “Christian” people. Heck, even the emperors were Arians in their day. They’re the people on top of the socio economic pecking order. Furthermore, their Arian version of the faith seems so much more reasonable and sensible and credible than the intellectually scandalous orthodoxy of Basil and Gregory and the historic church down through the ages.

But I’m with Basil and Gregory today. I recognize these heretics for what they are: wolves in sheep’s clothing. They might present as nice, respectable, prayerful and sincere Christians. That’s OK. But they’re heretics. They’re liars, and the people who believe their lies the most are themselves. If they have their way, and if their subtle heresies prevail they will destroy the faith. Therefore they are my enemies.

I want to hold to the historic Nicene faith with Basil and Gregory and with the saints and martyrs down the ages. I don’t mind a bit if the world thinks this faith is “antique” or “quaint” or “unfortunately rigid” or “too dogmatic” or “inaccessible to modern Christians”. The Arians probably made all those same arguments too.

I affirm the Nicene Creed and I don’t mind saying “consubstantial with the Father” and I hold to the clarity and simplicity of the words and don’t think they need to be “re-interpreted.”

January 4, 2012 Take Heart Take Hope
Recent Comments
0 | Leave a Comment
"Catholicism has always defined the ideal but there are no limits on God's mercy and ..."
Guest Tony Palmer: Is There Salvation Outside ..."
"With all due respect, Shaun, are you relegating the actual Faith to whatever the local ..."
PGMGN Notes on Tony Palmer’s Funeral
"There are good parking valets and bad parking valets. There are good housesitters and bad ..."
Elliot Bougis The Case for Conversion to Catholicism
"did you vote for Bush Fr Longenecker? would you have?"
Petey Understanding Iraq
Browse Our Archives
get the latest from
Catholic
Sign up for our newsletter
POPULAR AT PATHEOS Catholic
1