The Real Divisions in the Church of England

The Real Divisions in the Church of England November 21, 2012 Fr. Dwight Longenecker 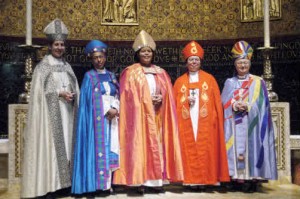 Yesterday I posted an explanation of the complex relationships within the Church of England. I explained here about Anglo Catholic, Evangelicals and Liberals. However, this is not the full story.

As usual, there is a story behind the story. The divisions between Liberal, Anglo-Catholic and Evangelical are, in many respects, only superficial and historical. The real division is between those Anglican Christians (no matter how they dress or worship) who believe that the Christian faith is a revealed religion, established by God and therefore unchanging, and those who believe the Christian religion is a human construct developed out of the circumstances of a particular historical and cultural setting.

Those who believe the Christian religion is revealed by God supernaturally also believe that the Church is essentially not of this world. They exist in this world to challenge the ways of this world. They are not supposed to be conformed to the world, but to be transformed. Those who believe that the Christian religion is revealed by God for the eternal salvation of souls see this world as needing repentance and forgiveness and salvation. They don’t mind if the world rejects them. They expect that. When asked to compromise the faith and change the faith to adapt to the world they assume the martyr’s stance. “Offer incense to idols? Bring on the roaring lions, the coliseum and the crowds.”

The second category of Christian are those who believe the religion is a human construct. They think it is the result of certain historical and cultural conditions and accidents. As it was produced by a cultural context, so Christianity has always adapted to the culture in which it finds itself. They see this as a good thing. This is their method of evangelization. They follow the lead of the current cultural climate because they see that as the way of being relevant and connecting with the people in their culture. They do not view the world as full of souls to be saved so much as a wayward child that needs educating and a little bit of discipline in order to reach his full potential. Christianity is for them, a method of personal growth and a system for societal change. It is for them more of an ideology than a theology.

The clash therefore is between those who believe the Christian religion is revealed and those who think it is relative.

This is the essential clash in the Church of England, and the vote on women bishops in the General Synod has revealed this deep fault line within the Church of England, and it is this clash of essential beliefs about what the Church really IS that is at the heart of the rift. This rift exists within the Catholic Church too, but it is especially painful for Anglicans because part of their heritage and core identity is that they are a national church. They are an established church, so their basic self identification is the second of the two choices–the church conformed to society in order to minister to society.

This is written into the Church of England genetic code. That’s how they’re wired. From the foundation of the Church of England it has been a church formed by the monarch, steered by Parliament and guided by the English culture. English vicars still love to think that they minister to “everyone who lives in the parish”. However, one of the comments from a woman who voted against women bishops yesterday is telling. She is a conservative Evangelical (and therefore of the group who thinks the Christian religion is revealed not relative) she said  quite simply and sweetly, “We are the part of the Church of England that is growing. Our churches are full. We are producing the largest number of new priests. We tithe and are therefore donating more than any other group in the Church of England.” She might also have added that it is conservative Evangelical religion which also makes up the largest part of the vast and fast growing church in the developing world.

If this is so, then the Church of England’s present crisis is not just the failure of its liberal leadership to bully everyone and push through a vote for women bishops. The crisis is a crisis of identity. Will the Church of England continue to be a church that adapts to every passing fad and fashion, or will it become a church of martyrs–a church which stands up against the trends of society and calls for repentance and a return to the gospel?

I think I can predict the answer…

Read More: The Smoke of Satan – Modernism in the Church;

What Would Rome Do?

Revealed Religion or Relevant and Radical?;

A Split is Imminent

November 20, 2012
Understanding the Crisis in the Church of England
Next Post

November 23, 2012 Parliament Will Force C of E
Recent Comments
0 | Leave a Comment
"Catholicism has always defined the ideal but there are no limits on God's mercy and ..."
Guest Tony Palmer: Is There Salvation Outside ..."
"With all due respect, Shaun, are you relegating the actual Faith to whatever the local ..."
PGMGN Notes on Tony Palmer’s Funeral
"There are good parking valets and bad parking valets. There are good housesitters and bad ..."
Elliot Bougis The Case for Conversion to Catholicism
"did you vote for Bush Fr Longenecker? would you have?"
Petey Understanding Iraq
Browse Our Archives
get the latest from
Catholic
Sign up for our newsletter
POPULAR AT PATHEOS Catholic
1

The Courtroom and the Mask
Steel Magnificat
Related posts from Fr. Dwight Longenecker