The Mayans the Mass and Me

The Mayans the Mass and Me April 15, 2013 Fr. Dwight Longenecker 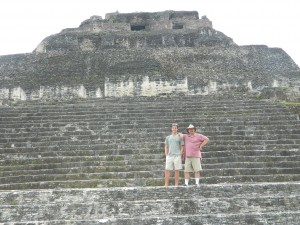 Sorry not to have been blogging for some time, but after a week’s vacation in Belize I need a few days to catch up.

While in Belize we had the chance to visit some Mayan ruins. I climbed to the top of the main pyramid in Caracol and sitting up there on a beautiful day in April, the jungle birds crying and the jungle trees and neatly trimmed lawned–I imagined the priests offering their sacrifices of grain and human lives to their sky gods. It was a different scene then. The forests all cut down, the barbaric rites continued in fear and desperation as famine and starvation loomed.

The critics of Catholicism–both Protestant and atheist–might say, “Geesh, it’s not really any different than what you do is it Father?”

They’d argue, “Don’t you also get dressed up and ascend to the heights of the holy place where you offer a sacrifice of bread and blood? Don’t you say this is the Body of Christ? Aren’t you making the same pagan sacrifices of body and blood and grain to the sky god hoping that he will bring you prosperity and peace?” The Protestant will turn away in horror at the idea that Catholicism is simply brutal paganism warmed up and the atheistic materialist will turn away in ridicule and disgust that we still believe such superstitious ideas and practice such crude religious magic.

What does the Catholic priest do at Mass? We re-present that one, full, final sacrifice of Christ. We bring into the present moment its mysterious benefits and the power of forgiveness and reconciliation. We apply the benefits of that one bloody sacrifice in an unbloody way.

When Christ the King came and the final sacrifice was made all the other sacrifices died a death and were no longer necessary. They had played their part. They had looked forward–even in horror and despair to what was to come. I remember as an Evangelical child hearing about the missionaries who went into primitive tribes in the jungles. Invariable they found within those cultures some hint–some guess or some prophecy of the mystery of Christ the King. Usually it was in the form of some kind of sacrifice to the gods–and all those religious seeds and unformed half-completed mysteries could be used to communicate to people of each different culture the reality and fulfillment of their hopes and dreams in the one who completed all things in himself.

April 16, 2013 Cults and Common Sense
Recent Comments
0 | Leave a Comment
"Catholicism has always defined the ideal but there are no limits on God's mercy and ..."
Guest Tony Palmer: Is There Salvation Outside ..."
"With all due respect, Shaun, are you relegating the actual Faith to whatever the local ..."
PGMGN Notes on Tony Palmer’s Funeral
"There are good parking valets and bad parking valets. There are good housesitters and bad ..."
Elliot Bougis The Case for Conversion to Catholicism
"did you vote for Bush Fr Longenecker? would you have?"
Petey Understanding Iraq
Browse Our Archives
get the latest from
Catholic
Sign up for our newsletter
POPULAR AT PATHEOS Catholic
1