The Catholic Faith – Ever Ancient Ever Young 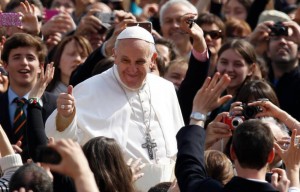 Two events converged for me today. One was the simplicity of celebrating a daily Mass and as I said the words I say so often, realizing that my own life is caught up in something far more stupendous and ancient than I am usually aware of. Here, in a humble church in Greenville, South Carolina I am by some unbelievable privilege sharing in the one sacrifice of the Mass which connects me to all Catholics worldwide and down through the ages. The Eucharist was suddenly ever ancient and every young. Here was the freshness of a summer day and the immediacy of the moment. Here were gathered the local concerns and worries of my family, my flock, my community, but here was also gathered the needs of the whole church and the whole world for which the Redeemer died. In this ordinary ritual 2,000 years of Christian life and history was compressed and summarized in this one place and in this one time.

Then, this afternoon I watched Pope Francis arrive in Rio de Janerio. There too was an incredible continuity of history. The man in the white soutane. The third pope now who I has been my Holy Father, but the same pope. The same uniform, a different man. The same message, a different style. The same gospel, a different emphasis. The same message, a different messenger. At the welcome he quoted Peter himself: “Silver and gold I have none. But what I have I give to you: Jesus Christ the Lord.” Surrounded by throngs of young people I realized that this faith–ever ancient and ever young was suddenly alive to me and true to me as never before.

What other institution, what other political party, what other ideology, what other celebrity, what other religion can marshall such crowds and inspire such joy, freedom and power? No wonder the powers of this world hate and fear the pope. No wonder Catholicism is the one religion–despite all its human faults and frailties–that remains at once ancient and wise yet youthful and strong. Only the power of the Holy Spirit himself could pour out on the world this great surge of faith, love and hope.

All of this is summed up with the images of a poor man in his seventies surrounded by hundreds of thousands of young people. There, in a poetic and poignant image the Catholic faith is summed up: here is the wisdom of age forever upheld by the idealism and zeal of youth. Here the hopes and dreams of the young are endorsed by an old man who has not grown old because he still lives the idealism of his youth, because he has not given up the dream, because he has not given in to despair and doubt and despondency, because he has kept the ancient faith and so himself has remained every young.

July 22, 2013 The Vicar Retires
Recent Comments
0 | Leave a Comment
Browse Our Archives
get the latest from
Catholic
Sign up for our newsletter
POPULAR AT PATHEOS Catholic
1