The Pope the Dog and the Bicycle Bell 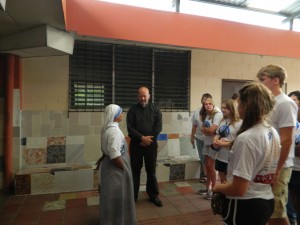 Someone has joked, “In Central America it’s not really a valid Mass unless there is a dog present.” I was therefore amused to see that at one of the Pope’s liturgies in Brazil a stray dog wandered onto the stage. For five years I took some American high school kids to El Salvador on a mission trip. The  Catholicism I experienced there helps me admire and understand Pope Francis. Sometimes there were dogs at the liturgy. Sometimes there were madmen and screaming children. There was loud music and no air conditioning. It was hot. It was real. It was the beautiful struggle man!

I’d like to share some learning points from El Salvador that have helped me understand Pope Francis and where the Lord is taking the church.

First, Central and South America is, for the most part, a Catholic culture. North America is a Protestant culture. What I mean by this is that certain Catholic ideas and principles are deeply woven into the South American and Central American worldview and self understanding. There are many aspects to this, but one of them is community over individualism. My experience of Central America was that community and the extended family were much more viable and active concepts than the individualistic, suburban nuclear family concept in the United States. The Catholic faith was part of this community experience.

Because of this emphasis on community and family the shared responsibility for one another was much higher on the agenda than it tends to be in the United States. I realize these are generalizations and we have good community carers here and selfish individualistic people there. However, I’m thinking in generalized terms. If I am right this underlying commitment to community and family means that the “social agenda” of the church becomes more prominent. To belong to a church is to belong to a community and community means solidarity and unity.

The typical American attitude on the other hand is, “Everybody is personally responsible. Every man for himself. This is the land of opportunity. Work hard and pull up your bootstraps!” This, is reflected in American Protestant religion which is also based in the subjective individual “born again” experience rather than the primary experience of the church. It seemed much more typical in El Salvador for people to be concerned for one another, to build community and to assist one another in that extended family sense. From what I experienced in El Salvador, I can better understand Pope Francis’ natural involvement in the local community, with the poor and the needy. To be a priest there was to be a Father in a different way than in the USA.

The second thing I experienced was the Hispanic approach to liturgy and music. Their lively and enthusiastic culture was part of their liturgy. The music was earthy, ordinary and Hispanic. It was their music. Read More.

Remembering Mr. Richard Kremin
Mr. Kremin is dead.  This brief sentence is meaningless for the vast...
view all Catholic blogs
What Are Your Thoughts?leave a comment
Copyright 2008-2017, Patheos. All rights reserved.