The Nightmare of Nihilism 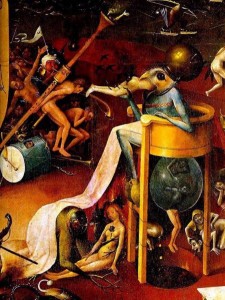 Joseph Pearce writes here on the nightmare of nihilism and the false promise of progressivism.

This spiritual entropy, which theologians prefer to call Original Sin, is a via media[5] between the fallacy of progressive optimism, otherwise known as the ascent of man, and the opposing fallacy of nihilistic pessimism, which could be called man’s descent. “One class of popular writers are perpetually telling us that the world has always been growing better and better,” wrote Chesterton; “others, rather less popular, that it has for some time been growing steadily worse. Personally, I cannot understand anybody thinking it has ever grown steadily anything.”[6] Reality is not in the process of becoming, whether we wish to perceive it as becoming better or worse, but, on the contrary, it simply is. The laws that govern reality are unchanging and unchangeable. Original Sin is as much an integral and integrated part of the cosmos as are the laws of thermodynamics and, in consequence, it cannot be extricated or repaired by any man-made progress. We cannot progress beyond what we are, i.e. fallen beings made in the image of God, and no technological progress or ideological innovation is going to alter the fact.

Pearce goes on to discuss whether the world is changing. Is everything getting better and better pace the naive optimist, or is everything descending into chaos as the perennial pessimist would have it? Neither. It’s a wonderful world and it’s a chaotic cosmos. The wonderful world is forever falling back into disintegration and chaos, but the action of a creative God and abundant grace is always also active in the world. The question is which position you will believe in and which action you will take.

Will you be realistic and recognize that the world is wonderful, but is fallen and falling and then will you also align your life to the dynamic of grace in the world and with the help of God, do something about it? Philosophical new years resolutions anyone?

January 4, 2014
Henry VIII and the Little Sisters of the Poor
Next Post

January 4, 2014 Poem for Epiphany
Recent Comments
0 | Leave a Comment
"Catholicism has always defined the ideal but there are no limits on God's mercy and ..."
Guest Tony Palmer: Is There Salvation Outside ..."
"With all due respect, Shaun, are you relegating the actual Faith to whatever the local ..."
PGMGN Notes on Tony Palmer’s Funeral
"There are good parking valets and bad parking valets. There are good housesitters and bad ..."
Elliot Bougis The Case for Conversion to Catholicism
"did you vote for Bush Fr Longenecker? would you have?"
Petey Understanding Iraq
Browse Our Archives
get the latest from
Catholic
Sign up for our newsletter
POPULAR AT PATHEOS Catholic
1