During Lent this year our small parish community faced sudden death five times. In started when a father of three in his early fifties–a faithful usher, parent at our parish school, Knight of Columbus and girls basketball coach collapsed with a heart attack.

Ten days later a good friend of his and a man who’d been a parishioner for years collapsed and died–also with a sudden heart attack. Then the weekend before Holy Week one of our families, heading to the beach for vacation were involved in a car accident. Mom ended up in intensive care and their little second grader didn’t survive. Then on Easter Day my sister in England died and later that week one of our older parishioners reached the end of his life.

It was a reminder to all of us that death comes when we least expect it and can come to anyone–three people in their forties and fifties, a little child and an old man. In death as in birth, they were equal.

The difficulty for all of us was to face the reality of death when we were also facing the reality of resurrection. On the one hand we were proclaiming with joyful hearts, “Christ is risen. He is risen indeed!” and the next moment we were weeping again for the horror and shock and dark reality of death.

What can be done in the face of such dark? The emotions are raw and overpowering and the dark, doubt and despair begin to creep in like an insidious serpent. And yet we claim the resurrection and the life.

This is where the reading from St Peter’s epistle became so powerful and strong on the Sunday after Easter: Here it is again if you had forgotten it:

Blessed be the God and Father of our Lord Jesus Christ,
who in his great mercy gave us a new birth to a living hope
through the resurrection of Jesus Christ from the dead,
to an inheritance that is imperishable, undefiled, and unfading,
kept in heaven for you
who by the power of God are safeguarded through faith,
to a salvation that is ready to be revealed in the final time.
In this you rejoice, although now for a little while
you may have to suffer through various trials,
so that the genuineness of your faith,
more precious than gold that is perishable even though tested by fire,
may prove to be for praise, glory, and honor
at the revelation of Jesus Christ.
Although you have not seen him you love him;
even though you do not see him now yet believe in him,
you rejoice with an indescribable and glorious joy,
as you attain the goal of your faith, the salvation of your souls.

The message is clear. On the one hand the resurrection is real and powerful. It is the living hope. But Peter goes on to say that even so we endure trials here so that the genuineness of our faith will be purified and made strong, and these trials are so for the ultimate praise, glory and honor of God.

What he means by this is that God is actually glorified as we go through the pains of mortal death, bereavement, horror and grief. The same was there in the powerful gospel of Lazarus’ rising the Sunday before Holy Week. Jesus allowed Lazarus to die and said it was so “the glory of God might be revealed.”

This is the paradox of facing death at Easter: that while we still face mortal death with all its dark horrors, it is through facing that death and going through it that we learn ever more deeply the power and reality of the resurrection. It is going through the valley of the shadow of death that we reach the light on the other side. It is by going through the dark night that the morning is more glorious and real than we could ever have known otherwise.

Of course it is hard. It seems meaningless and absurd. It is horrible and grueling but it is real. It is as gritty and real as childbirth and marriage and love and  everything which is infinite and good.

It is terrible, but I and my family and my parish family would not want it to be otherwise.

So in the end we say with Peter the Pope, “Blessed be the God and Father of our Lord Jesus Christ!”

I will share a detail of my own sister’s passing. Denise’s husband called for the priest once they knew the cancer was again hitting hard. He came and anointed her and they prayed together. The family was gathered around and after the anointing my sister sat up and said to everyone gathered, “Come on! Sing Easter Songs!”

And so they did. They sang. They sang Easter songs.

This is the hope and joy that only Christians can exhibit in the face of death. I’m proud of my sister’s courage when facing the great dark, and I’m proud of my family and proud of my parish family at Our Lady of the Rosary. They knew these lessons at heart level and they knew that it was through the tears and anguish that the triumph comes and they knew with a deep faith that Christ the Lord was with them.

And they didn’t need me to tell them so with lots of theological theories. They simply lived it and it was real.

April 28, 2014
Mantilla the Hon on Queen Sophia
Next Post 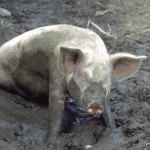 April 29, 2014 False Teachers Are Like Brute Beasts
Recent Comments
0 | Leave a Comment
"Catholicism has always defined the ideal but there are no limits on God's mercy and ..."
Guest Tony Palmer: Is There Salvation Outside ..."
"With all due respect, Shaun, are you relegating the actual Faith to whatever the local ..."
PGMGN Notes on Tony Palmer’s Funeral
"There are good parking valets and bad parking valets. There are good housesitters and bad ..."
Elliot Bougis The Case for Conversion to Catholicism
"did you vote for Bush Fr Longenecker? would you have?"
Petey Understanding Iraq
Browse Our Archives
get the latest from
Catholic
Sign up for our newsletter
POPULAR AT PATHEOS Catholic
1