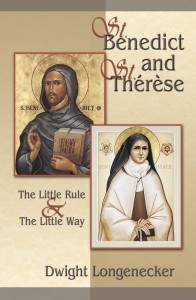 Some of my work will start appearing at Catholic Exchange website. Instead of new articles they have asked to publish excerpts from my various books.

Here is an excerpt from my book St Benedict and St Therese – The Little Rule and the Little Way.

To study two saints together is to perceive three things: their unique personalities, their similarity to one another and the way their lives and teachings complement each other. When Saint Benedict and Saint Thérèse of Lisieux are studied together the contrast between their personalities is striking. One is an Italian patriarch of the sixth century, the other a bourgeois French girl at the end of the nineteenth. Benedict writes from the edge of the middle age. Thérèse writes from the edge of the modern age. Benedict writes a monastic rule, founds monasteries, rules as an abbot, is visited by royalty and dies an old man. Like a French Emily Dickinson, Thérèse hardly moves beyond her provincial family circle. She has a pious father, lives an enclosed life, writes poetry and a quaint biography, and dies a painful death at the age of twenty four. Like Aquinas and Francis, Benedict and Thérèse are radically different personalities; also like Aquinas and Francis, they complement one another in surprising and profound ways. Augustine wrote about the Scriptures that ‘the New Testament is hidden in the Old and the Old made manifest in the New.’  So it is with the writings of Thérèse and Benedict;  the remarkable insights of Thérèse are hidden within Benedict’s simple monastic rule, and the universal wisdom of Benedict is made fully manifest in the writings of Thérèse.

June 19, 2014 Closing Churches Closes Faith
Recent Comments
0 | Leave a Comment
"Catholicism has always defined the ideal but there are no limits on God's mercy and ..."
Guest Tony Palmer: Is There Salvation Outside ..."
"With all due respect, Shaun, are you relegating the actual Faith to whatever the local ..."
PGMGN Notes on Tony Palmer’s Funeral
"There are good parking valets and bad parking valets. There are good housesitters and bad ..."
Elliot Bougis The Case for Conversion to Catholicism
"did you vote for Bush Fr Longenecker? would you have?"
Petey Understanding Iraq
Browse Our Archives
get the latest from
Catholic
Sign up for our newsletter
POPULAR AT PATHEOS Catholic
1