The Story of My First Confession

The Story of My First Confession January 2, 2015 Fr. Dwight Longenecker 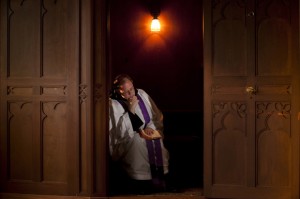 My first confession was when I was in my late twenties. I was a member of the Church of England and was taking a year between seminary and ordination.

I’d done something of which I was deeply ashamed and knew that I wanted to go to confession. As an Evangelical Christian I had been taught that I could just say “Sorry!” to God and that was enough.

After all, I was saved and going to heaven so my sins didn’t really matter that much. It was enough to mutter an apology to God and stay on the glory train to heaven.

The problem is, my theology was not profound enough.

I wanted to get it off my chest. I wanted forgiveness. I admit it. I also wanted the penance of seeking out a priest and humbling myself and being truly penitent. I wanted a stern priest and a severe penance.

In other words, it was because I took sin seriously that I wanted a church and a theology that took it seriously.

So on a dreary February afternoon in London I went searching for a Catholic priest.

Notice that I was an ordinand of the Church of England. I was to be ordained later that year as a deacon.

So I hauled myself off to the Brompton Oratory and sat in the line with a load of Catholics who looked equally glum.

When it was my turn I stepped into the confessional. The priest was behind the screen and I spluttered out, “Father, I suppose I am first supposed to tell you that I am not a Catholic.”

“Well what are you then?”  came a sharp voice with a hard Irish accent.

“I’m an Anglican. But I would like to make my confession anyway.”

“Well, I can’t hear your confession” came the voice. “You’re a Protestant. Now go and I’ll pray for you.”

I was shocked and embarrassed and ashamed of myself. In fact I wasn’t mad at him. He was just doing his job.

Nevertheless, not to be daunted, I made my way to Westminster Cathedral and joined another line for confession with another gang of glum looking Catholics.

This time I said the same thing and there was a pause from the other side of the screen.

This time a gentle English voice said, “Well now, I’m not supposed to hear your confession because you’re not a Catholic, but here you are, and here I am and the Holy Spirit is between us. He has brought you here no doubt and so why don’t you go ahead and make your confession?”

So I poured out my heart and he listened and admitted that I had done wrong. He gave me a bit of wise counsel and then prayed with me–withholding absolution as he was bound to do, but assuring me nonetheless of God’s love and forgiveness for me.

All these years later I have remembered those two priests–both of them faithful in their own way. One harsh–but I needed harsh, and one gentle–and I needed gentle.

And by God’s gentle and amazing providence both priests on that dreary afternoon opened my heart to God’s healing.

I am sure that the seed of the Catholic faith already planted in my heart was watered and nurtured that day.

This is why confession is so precious to me now and why I feel so sad for my Protestant friends–some of whom have admitted to me that the thing that draws them most to Catholicism is the confessional.

Why is it then, that so many Catholics avoid this sacrament? Why do so many not avail themselves of this grace, this beauty and this divine contact?

It remains a mystery to me as week after week, now as a Catholic priest I sit in my confessional and wait and pray, and from time to time I remember those two priests who remained faceless to me, but who in their facelessness gave voice to the forgiving God. 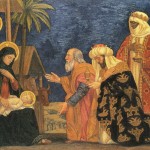 January 3, 2015 The Riddle of the Three Wise Men
Browse Our Archives
get the latest from
Catholic
Sign up for our newsletter
POPULAR AT PATHEOS Catholic
1