Is the Pope Out of Control? 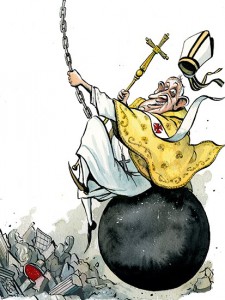 Damian Thompson aka “the blood crazed ferret” launches a scathing attack on Pope Francis here at the UK’s Spectator.

After the latest disastrous interview with ninety one Italian journalist Antonio Scalfari, Thompson argues that the Pope is unpredictable, out of his depth and a dangerous loose cannon.

Last Sunday, the Italian newspaper La Repubblica carried an article by Eugenio Scalfari, one of the country’s most celebrated journalists, in which he claimed that Pope Francis had just told him that ‘at the end of faster or slower paths, all the divorced who ask [to receive Holy Communion] will be admitted’.

Catholic opinion was stunned. The Pope had just presided over a three-week synod of bishops at the Vatican that was sharply divided over whether to allow divorced and remarried Catholics to receive the sacrament. In the end, it voted to say nothing much.

On Monday, the Pope’s spokesman, Father Federico Lombardi, said Scalfari’s report was ‘in no way reliable’ and ‘cannot be considered the Pope’s thinking’.

Fair enough, you may think. Scalfari is 91 years old. Also, he doesn’t take notes during his interviews or use a tape recorder. Of course he’s not ‘reliable’.

But that didn’t satisfy the media. They pointed out that the Pope knew exactly what he was letting himself in for. This is the fourth time he has chosen to give an interview to a man who relies on his nonagenarian memory. In their last encounter, Scalfari quoted the Pope as saying that two per cent of Catholic priests were paedophiles, including bishops and cardinals. Poor Lombardi had to clean up after that one, too. Last time round, Catholics gave Francis the benefit of the doubt. This time many of them are saying: never mind Scalfari, how can you trust what the Pope says?

It is certainly difficult to imagine why on earth, after getting his fingers burnt with Scalfari three times already, that the pope would go back for more. Has an aged, irresponsible, atheist Italian journalist become Pope Francis’ new media mouthpiece?

I think Pope Francis has lots of strengths, but one does begin to wonder what he’s up to.

November 5, 2015 The Catholic Roots of England
Browse Our Archives
Follow Us!