Last summer during our pilgrimage to England we visited Canterbury. Saying Mass in the crypt of the cathedral was an amazing experience, then spending time in prayer at the site of the martyrdom of St Thomas a Becket (memorial today) was very moving.

What made the visit to Canterbury even more astounding was our visit to the little Catholic Church of St Thomas of Canterbury. There they have retained a few of the remaining relics of St Thomas a Becket and in a side chapel they have a collection of second class relics of a modern bishop martyr, Abp Oscar Romero of El Salvador.

The connection between the two saints spans centuries and culture, but is a clear reminder that the call to follow Christ may demand the final sacrifice of one’s life.

It is not possible to visit the actual site of very many martyrdoms, but in this case you can not only visit the place in 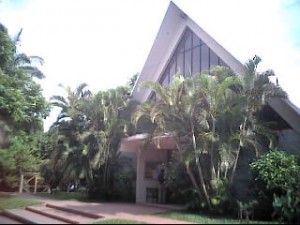 Canterbury Cathedral where Becket was slain, but you can also visit the church where Abp Romero was gunned down in 1980. I have been there several times during mission trips to El Salvador.

The chapel is situated in an enclosure where Romero lived in a small cottage in the grounds of a convent. He was saying Mass for the sisters when gunmen pulled up in a pickup and the assassin fired through the open church door.

The assassination of Thomas Becket was recorded by a colleague who was wounded in the brutal attack.

…The wicked knight leapt suddenly upon him, cutting off the top of the crown which the unction of sacred chrism had dedicated to God. Next he received a second blow on the head, but still he stood firm and immovable. At the third blow he fell on his knees and elbows, offering himself a living sacrifice, and saying in a low voice, ‘For the name of Jesus and the protection of the Church, I am ready to embrace death.’ But the third knight inflicted a terrible wound as he lay prostrate. By this stroke, the crown of his head was separated from the head in such a way that the blood white with the brain, and the brain no less red from the blood, dyed the floor of the cathedral. The same clerk who had entered with the knights placed his foot on the neck of the holy priest and precious martyr, and, horrible to relate, scattered the brains and blood about the pavements, crying to the others, ‘Let us away, knights; this fellow will arise no more

The pictures of the murdered archbishop of San Salvador spread like wildfire and both Archbishops quickly became popularly acclaimed saints because of their stance against tyranny and injustice.

Becket had clashed with King Henry II over the rights of the church–claiming that the king had usurped the proper powers and rights which belonged to the church. Romero clashed with the government of El Salvador in defense of the poor and those being killed on both sides of the brutal civil war.

The murders of both archbishops was bloody and shocking. I haven’t posted the pictures of the slain Romero, but you can find them here. They’re as graphic and shocking as the explicit description of Becket’s murder.

Becket’s memorial today and Romero’s approaching canonization reminds each one of us that the powers of this world are in constant conflict with the kingdom of Christ. Their killings also remind us that being faithful even unto death is the destiny of real people who are in real conflict with real issues in real life.

The conflicts are always complex and the way of discernment is difficult. Becket was accused of being power hungry, insubordinate, proud and stubborn. Romero was accused of being a communist sympathizer, leftist, liberation theologian and traitor to Christ and his church.

In our own battles in this day and age…St Thomas and St Oscar orate pro nobis. 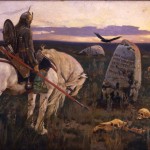 December 28, 2015
The Infant of Prague - Warrior for Our Times
Next Post 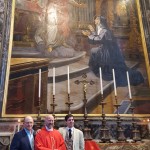 December 29, 2015 Why I Converted to the Catholic Faith
Browse Our Archives
get the latest from
Catholic
Sign up for our newsletter
POPULAR AT PATHEOS Catholic
1