The Pyramid of Hate in the Muslim World

This article gives some statistics about the atmosphere of hate in the Muslim world, and it illustrates the difficulty we face in disentangling the Islamic religion from Islamic culture.

The Catechism of the Catholic Church is graciously optimistic about the religion of Islam, but in the inter faith section it doesn’t speak of the culture of the Islamic world.

Because the Koran addresses every aspect of life with legalistic precision it becomes very difficult to extricate the “religion of peace” from the “culture of hate.”

Last Sunday at Mass I spoke about Islam and explained how the Koran is believed to be a literal, word for word dictation from the angel Gabriel to Mohammad and how this differs from the Catholic understanding of the Bible. The Bible is the witness to God’s primary revelation: Jesus Christ. It is not a rule book dictated to a prophet by an angel.

Afterwards a bright spark–a young convert girl said, “But what about the Ten Commandments?” She had her head in gear and understood that the Ten Commandments (and by extension the whole Mosaic law) is presented as a Divinely dictated law code for humanity. Wasn’t this like the Koran?

Yes and no. The Mosaic Law does come across as a divinely dictated law code, and if so, then Mohammad is like Moses. However, the New Testament rightly teaches that the old law has been fulfilled in Christ and is therefore no longer strictly in effect. What we conclude is that the basic principles expressed in the Ten Commandments provide the basis from which we develop a Christian code of conduct.

This is very, very different from a law code dictated to a prophet of an Arabian tribe in the seventh century which fundamentalist Muslims then apply to all people at all times.

December 7, 2015
Five Ways Islam is Different from Christianity
Next Post 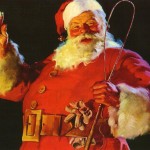