Now that little Alfie Evans has joined the angels, it is worth looking again at what really happened in this event.

We saw something extraordinary emerge. It was called “Alfie’s Army” At the hospital crowds gathered to rage against the authorities. Around the world small groups gathered to pray and protest. Social media was set alight as ordinary people found their voice and vented their frustration, anger and fear.

In the confusion of war many mistakes are made. The actual medical facts were no doubt extremely complicated and the ethical issues were not straightforward. Yes, a dying patient needs to be hydrated, given nutrition and pain relief, but it gets to a point where that person’s body is shutting down and can’t actually process food any longer. Must they be force fed when even that is to no avail? Of course not. Nature can take its course.

No doubt Alfie’s army were swept away by a range of other interlocking and interfering agendas. Sentimentalism played a part. Here was a cute baby boy fighting for life. All the Mama bears of the world unite! PS: I’m not mocking this. (I think it was a noble and beautiful thing to see women rise up to protect a baby.)

Then there was the English class struggle dimension. Tom and Kate came across as a working class couple and they were locked in a struggle with the ruling elite of Britain–the medical staff, the hospital administration, the judiciary and of course the politicians and ultimately the royal family. The fact that a certain Will and Kate proudly displayed their healthy, privileged baby boy added salt to the wounds. Would a brain damaged royal prince be given the same seemingly callous treatment?

Now let’s throw in the religious dimension. The brave father traveled to Rome to meet Pope Francis who gave him a compassionate welcome. Meanwhile his own Archbishop of Liverpool sided with the “Big Bad Wolf” of the UK establishment. The drama was heightening day by day.

The narrative emerged that establishment powers conspired against these poor parents depriving them of their child and their choice to seek further treatment in Rome. Was that really the case? The legal experts would weight in and debate concepts like power of attorney and what rights we hand over when we accept treatment in hospital for ourselves or our loved ones.

So beneath the tragedy of the terminally ill baby boy was brewing another societal story which we would do well not to ignore.

The drama of “Alfie’s Army” should be seen as part of a larger social phenomenon connecting with the Brexit vote, the Trump victory and the rising nationalist movements across Europe.

The totalitarianism we are facing in our age is one that is completely different from communism and fascism. They wear business suits, not SS uniforms. They control the world with laptops and apps, not machine guns and tanks. They persecute with lawsuits not the Gulag. They will manipulate and control with their ideologies and propaganda, but it is done through game shows, reality TV, the broadcast news and the respectable BBC.

It is about the rising rage of the ordinary folks, and the folks on the top of the heap would do well to listen and channel that rage because the more they try to suppress it the greater it will become. 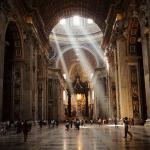 April 28, 2018 Triumphs and Tragedies -2
Browse Our Archives
get the latest from
Catholic
Sign up for our newsletter
POPULAR AT PATHEOS Catholic
1