Social media is a wonder because it throws into your face aspects of life you might never otherwise consider, and last night was no exception.

I stumbled across this Gala at the Met extravaganza in which numerous people who are evidently famous in some way wore outlandish outfits to a gala in New York City having to do with a display at the art museum of liturgical garb and other fashion items with an ecclesiastical theme. You can view some of the pictures here if you’re interested.

Some thin skinned Catholics are upset that some of the outfits were tasteless, vulgar, lewd or even blasphemous. So there was one gal dressed in a glittering mini skirt crowned with a huge bejeweled miter like some mock pope-ette (or poppet if you like). Another woman with bare shoulders was sheathed in a gown covered with icons of the Virgin Mary. Other celebrities’ outfits were churchily themed in one way or another. To be fair, some were tacky and vulgar and when they were combined with all the heaving, exposed female flesh it was pretty trashy.

It was also interesting to observe that Cardinal Dolan was there hobnobbing with the glitterati along with New York media darling and LGBT activist Fr James Martin SJ.

I guess those who would defend his presence said Jesus mixed with the low life in his day, so there’s a precedent.

To be honest I wasn’t that offended by the display. It was more like I was fascinated by the vulgarity, the vanity and stupidity of it. In fact it was fascinating the way a really bad theater production might be. After sitting through one scene where they forgot their lines, missed their entrances and sang off key you want to stay for the rest of the show because the awfulness of it has, itself, become entertaining.

The other thing that was absorbing was that it was clear that a good number of people took the event seriously and were very interested in who was there and who wore what and who was seen with whom.

Then in my social media browse I happened across a video of another thing in New York City–a restaurant that serves gold planted chicken wings.

The video is here.

Talk about lipstick on a pig. We can now pump up that metaphor and say it was gold leaf on a cheeseburger.

What to make of the Met Gala and the gold plated junk food? Simply that when ignorance and extreme wealth are put together you get the most meaningless and vulgar displays of human vanity imaginable.

The whole thing came across as trailer trash with cash.

What tops it all is that Cardinal Dolan and Fr James Martin were in attendance like official chaplains to Vanity Fair.  One doesn’t want to be too much of a spoil sport, but let’s be honest–this sort of vulgarity with Catholic clergy playing along is reminiscent of the decadence of Renaissance Florence and Rome. There and then the prelates mixed with the super wealthy, either turning a blind eye on their profligacy, prostitution, racketeering and promiscuity or else justifying it and participating in it.

I wish  Michael Voris– the  Savonarola de nos jours might have turned up to turn up the volume and turn up the temperature. 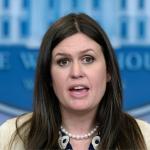 May 3, 2018
In Which Sarah Huckabee Sanders Teaches a Bible Verse
Next Post 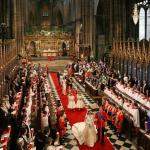 May 19, 2018 A Catholic Anglophile on the Royal Wedding
Browse Our Archives
Related posts from Fr. Dwight Longenecker