From the beginning I expressed my personal dislike of Donald Trump, and some right wing websites have even branded me a “Never Trumper”.

I still don’t like the man, but I think he’s made some good decisions. Time will tell whether his legacy is a good one, or whether he crashes and burns.

Putting aside my personal dislike of him, and setting aside his decisions and actions, what interests me most about Trump is his personality type and people’s reactions to him.

When I was running my own business training company I found the Enneagram system of personality types to be very helpful. I don’t have much time for the use of the Enneagram in the area of spirituality, but like most personality profiling systems, it has some interesting insights into human nature, and we can learn from them without treating it as some sort of new gospel that explains everything.

In case you haven’t already noticed, Trump is a classic Enneagram Type 8 – the one I call The Warrior.

The good thing about this is that the Warrior rarely holds grudges. If he wins he shakes hands, wishes you well and its water under the bridge. He’s immediately ready for the next battle.

I write this as Trump is in Europe and in the UK they are planning big protests and floating a huge hot air balloon of a cartoonish Trump with little hands, big hair and wearing a diaper.

They should know that this will not offend or phase Donald Trump one iota. When he sees it he will laugh it off scornfully and write the protestors off as big time losers. If he takes the protests seriously at all it will simply be the fact that he has spotted some more enemies with which to do battle. He likes battle remember. He loves a good scrap, and the more people protest and wave their signs and go on marches wearing silly hats and being serious, the more Trump wades into the fray as the enthusiastic bruiser that he is.

People should know therefore that when they protest they are actually playing his game. He either ignores it as an elephant ignores a fly or he comes out guns a blazin’. Furthermore, not only is Trump not phased by the protests, his supporters become even more gung ho. Every time a protester attacks Trump they boost the resolve of his supporters and give Trump more votes. Furthermore, the more they moan and complain and spit and hiss, the more ordinary people who don’t like Trump start getting off the fence to stand on his side.

So, if you don’t like Trump (or any other Warrior type in your life) what is the best way to deal with them? If you stand up to them, they actually like it. They want you to step out and put up your dukes. Mockery? It doesn’t work. They don’t mind being mocked. They’ve got thick skin. They’ve got their armor on. They’ve learned long ago that names can never hurt you.

One way, of course, is to fight on the Warrior’s terms. Wade into battle, don’t be afraid to fight dirty, be as mean as a junk yard dog and rassle the bully and pin him down.

Good luck with that.

While you might win, you’ve lowered yourself to his standards and you’ll probably get a bloody nose and maybe end up losing anyway.

There is another way, and that is to know the Warrior better than he knows himself. You see, underneath the Warrior really thinks he is a good guy. He thinks he is fighting for a good cause and waging a righteous battle. In fact, underneath the surface, he believes he has a big heart, that he cares for people and that he is really only fighting to defend others. If you don’t believe me, start asking the Warriors themselves.

In my business training sessions we would get the different personality types around a table and ask them questions about how they see life and invariably the Warriors would say, “I wish people would realize first of all that I’m not as intimidating as they seem to think, and secondly that I’m really a nice guy. I like people and I really want to help them.”

As it happens, I think this may be exactly the role Mike Pence is playing in the current White House drama. If so, it will be interesting to see how Trump evolves and how his blustering style develops. If he nurtures this good side of his personality and uses the power of the presidency to do so, he could emerge as a terrific president.

If he doesn’t he will end up at best a petulant loser and at worst an angry tyrant. 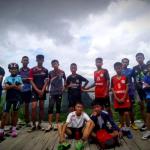 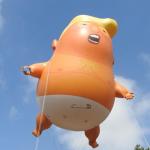 July 14, 2018 The Trump Blimp and the Roots of Rage
Browse Our Archives
get the latest from
Catholic
Sign up for our newsletter
POPULAR AT PATHEOS Catholic
1