The Bethlehem Shepherds Were Not Just Country Bumpkins

The charming story of Christmas night is that the shepherds were a bunch of country bumpkins who were dozing around the fire on the hillside when some angels appeared in the sky and sang “Glory Hallelujah” and the farmers rubbed their chins and said, “Ye know Festus, I speck we oughter go down there to the village and see if we can find this here pretty baby.”

There was more to it than that. Much more.

The Jewish historian Josephus writing in the first century records that at Passover up to 265,000 lambs would be sacrificed in the Jewish temple at Jerusalem.

The Passover lamb was called “The Lamb of God”

Those lambs had to meet the strict legal-religious regulations of the Jewish faith. They had to be no more than one year old, male and without spot or blemish. Therefore they had to be born in controlled conditions and inspected for birth defects before being raised in protected conditions.

Where did they get that many lambs? The law also said that animals to be sacrificed had to be born within five miles of Jerusalem.

The hillsides around Bethlehem, therefore were a first century lamb factory farm. When the lambs were born they were wrapped up in strips of cloth to protect them and placed in a stone feeding trough in the birthing barn until the priest could come by and inspect them.

This is why the angel said to the shepherds “This shall be a sign for you. You will find the baby wrapped in swaddling clothes and lying in a manger.” The “manger” was most likely a stone feeding trough, not a wooden crib as we usually see. That comes from the medieval version of the story.

Jesus was therefore born in the same place and at the same time with the same treatment as the lambs that would be sacrificed.

That’s why they worshipped him. They knew he was the promised Messiah, the Suffering Servant, the Lamb of God.

However, the breed of sheep most common in the Middle East–the Awassi–give birth in December. Learn about them here. 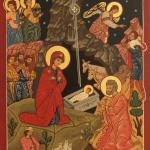 December 20, 2018
Yes, Jesus Really Existed and He Was Born on December 25
Next Post 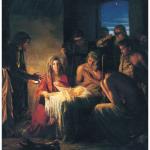