A Catholic priest friend of mine commented recently, “We’re in a sixteenth century situation.”

You might remember that the sixteenth century was one of enormous upheaval, turmoil and crisis. Martin Luther was on a roll, Henry VIII was on the rampage, the political situation was tense and meanwhile the Renaissance popes fiddled while Rome burned…this was not quite literally true. The Medici Pope Clement VII didn’t fiddle while Rome was sacked and burned, but he did flee for his life to the Castel Sant Angelo. Then, when the tide had turned, went back to the same old same old.

The recent investigation into McCarrick protege, Bishop Bransfield of West Virginia reeks of the same corruption. This article from the Washington Post outlines Bransfield’s Renaissance Rome lifestyle. Here are a few choice morsels:

It was billed as a holy journey, a pilgrimage with West Virginia Bishop Michael J. Bransfield to “pray, sing and worship” at the National Shrine in Washington. Catholics from remote areas of one of the nation’s poorest states paid up to $190 for seats on overnight buses and hotel rooms.

Unknown to the worshipers, Bransfield traveled another way. He hired a private jet and, after a 33-minute flight, took a limousine from the airport. The church picked up his $6,769 travel bill.

That trip in September 2017 was emblematic of the secret history of Bransfield’s lavish travel. He spent millions of dollars from his diocese on trips in the United States and abroad, records show, while many of his parishioners struggled to find work, feed their families and educate their children.

Pope Francis has said bishops should live modestly. During his 13 years as the leader of ­the Diocese of Wheeling-Charleston, Bransfield took nearly 150 trips on private jets and some 200 limousine rides, a Washington Post investigation found. He stayed at exclusive hotels in Washington, Rome, Paris, London and the Caribbean.

Last year, Bransfield stayed a week in the penthouse of a legendary Palm Beach, Fla., hotel, at a cost of $9,336. He hired a chauffeur to drive him around Washington for a day at a cost of $1,383. And he spent $12,386 for a jet to fly him from the Jersey Shore to a meeting with the pope’s ambassador in the nation’s capital.

Where did the money come from? Like the medieval abbots and prelates, it was revenue from property holdings.

In West Virginia, Bransfield took responsibility for a vast diocese in great need. Nearly 1 in 5 state residents lived in poverty, the opioid epidemic was spreading and even coal mining jobs — a mainstay of West Virginia’s hardscrabble economy — were hard to come by.

Bransfield had access to an obscure source of riches. More than a century ago, a New York heiress donated land in West Texas to the West Virginia diocese. The land turned out to be rich with oil, generating annual revenue of almost $15 million in recent years.

Bransfield did not call attention to that revenue publicly, but the diocese drew on it to cover his travel expenses and other personal spending, according to the confidential investigative report. During his 13 years in West Virginia, Bransfield spent $4.6 million on renovations to his church residence, almost $140,000 at restaurants, $62,000 on jewelry, and thousands on alcohol, the report shows.

Financial corruption is nothing new. We all have a tendency towards self indulgence, and we justify our little luxuries as being “hard earned” or a “well earned holiday.” We see our own luxuries and compare ourselves to those who are even more indulgent. “It’s true we flew business class, but we weren’t like those people in first class!”

It is certainly true that wealth, on its own, is not an evil. The New Testament teaches that it is the LOVE of money that is the root of all evil, not the money.  A person who works hard is entitled to have lots of money. The question is what do you do with the money? Plenty of wealthy people are generous with their giving while still enjoying a nice lifestyle.

Neither have diocesan priests and bishops taken a vow of poverty. We’re not all Franciscans. Canon law says we should strive to live in “apostolic simplicity.” We may own stuff, but we are not to be extravagant and self indulgent or greedy and acquisitive.

The problem with Bishop Bransfield is that he was spending money that he hadn’t earned. The lady who gave the land in Texas did not do so in order to provide jets and limousines for the bishop. She gave it for the work of the Lord in the diocese and by “Lord” she did not mean the Lord Bishop. That Bishop Bransfield spent the money on luxuries for himself and his friends is bad enough, but the fact that he was the bishop of an impoverished rural diocese is even worse. What if the income from that land in West Texas were invested in the parishes, schools and evangelization of the people of West Virginia?

Now here’s the real kicker. Like the Renaissance popes who didn’t really think there was a problem–neither does Bransfield.

When confronted with his ridiculously lavish lifestyle he made excuses. It is the same old story from the usual suspects: defend, deny, deflect. Defend, deny and deflect.

Bransfield said “other people on his staff made the hotel bookings.” Then he played the victim, “When I was told I was being relieved of my ministry it was the worst day of my life.”

Not public penance and sorrow for his public wrongdoing. Just defend. Deflect. Deny. McCarrick did the same.

What would it have been like if Bransfield had just a touch of self awareness and humility and said something like, “I am sorry for what I have done. I have lived a lavish lifestyle at the expense of the diocese. I should have spent more time with my people in West Virginia and used the windfall from our West Texas holdings for the health, education and welfare of the poor in my diocese. I am resigning and from henceforth you will not have me around to haunt you with my bad name. I have accepted a post as the parochial vicar of St Peter Claver parish in Haiti. Good bye and God bless you.”

Such an action would boost the church’s reputation and evangelized millions.

Instead, like his chum McCarrick, he has slunk off with his tail between his legs.

The final aspect of this scandal is the suspicion that this may simply be the tip of the iceberg. What are the lifestyles of the rest of our bishops and priests? How do the bishops who are in the McCarrick Club live? What is the McCarrick Club? Just do a bit of snooping around and you’ll see that McCarrick had a whole network of proteges–men he groomed and brought up through the ranks. Cardinal Bernardin of Chicago was part of the network, and you’ll find them in the halls of the most powerful dioceses and archdioceses still. The rot goes back to Cardinal Spellman and beyond and it continues today in Newark, Washington, San Diego and beyond.

It’s not surprising that Bransfield was fond of private jets and limousines. “Limousine Liberal” has been a catchphrase for this type of hypocrite for a long time.

PS: The only time I met Archbishop Wuerl personally was at an event in Texas, and I couldn’t help noticing that after he was done schmoozing the folks with deep pockets he slipped out a side door and into a waiting limousine. One can’t help wondering what sort of jet was waiting for him at the airport. Did he squeeze into a seat in the main cabin next to a chunky fellow with BO? Somehow I think not. 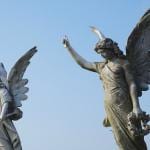