Hail Lady Death: Death Goddesses From Around The World

Goddesses of death seem to be more prominent lately.  Everyone I know worships at least one of them, if not two.  Maybe it’s a sign of our times, when women are fighting for equal rights, and with all that power, they seem to be more lethal than ever.  Or maybe the magnitudes of those who worship the death goddesses are yet another evolution of our generation; a rejection of the way our parents viewed death and the afterlife.   Maybe death deities are needed by us now more than ever before and they’re visiting us more now because as a society, we’re more open-minded.

Whatever the reason, let’s examine various goddesses of death from many cultures around the world.

The Morrigan, also known as the Queen of Phantoms, is an intense triple goddess from Irish/Celtic lore, associated with crows or ravens, battle, and death.  It is said she shapeshifts into a crow/raven and can foretell of death.  She is also said to carry the souls of the dead in her black wings, toward rebirth.

The Morrigan is not to be taken lightly.  I’ve heard tell that she is quite demanding of her followers, but just as rewarding.  In her pantheon, she doesn’t rule over the land of the dead in her pantheon, but her strength and sovereignty are never in question.

One of my principal goddesses is Hel, the Norse goddess of death.  She rules over Niflheim, also known as the World of Mist, or Hel.  It’s the place where the gentle dead go — those who have not died in battle.

Hel, or Lady Death, appears as a half-rotted young woman, with flesh on one side of her face and body and nothing but bones on the other side.  Her visage may scare some people, but I believe it’s a sign of her being in two worlds (or of two worlds).  Some people say her lessons can be harsh, but I haven’t experienced that.  She can be a very loving, gentle, and maternal goddess.  She is sometimes associated with ravens/crows, but this might be more of a newer gnosis about her.

Santa Muerte, also known as Our Lady of Holy Death, is a goddess from the Southwestern United States and Mexico whose worship has spread like wildfire.  Her worship has increased drastically in the past decades, claiming worshippers all over the world.  She is usually depicted as the personification of death — as a skeleton draped in a cloak with a hood. Santa Muerte sometimes holds a scythe and/or a globe.

Apparently, her saintly title isn’t quite legitimate: the Catholic Church has been trying for years to dissuade people from worshipping her, but her pull is so much greater.  Some posit that her worship is so attractive because, unlike the church, “she is said not to punish for traditional sins.”  Her worshippers remark upon her kindness and protection for the living.

Santa Muerte’s origins may lie with the Aztec goddess Mictecacihuatl, known to her followers as Lady Death.  She appears as a skeleton as well and ruled over the otherworld with her husband, Mictlantecuhtli.  She presides over festivals for the beloved dead, which are thought to be the origin of the Day of the Dead celebrations.  Her role in the underworld is to guard the bones of the deceased.

Ereshkigal – Queen of the Underworld

The Sumerian goddess Ereshkigal had many titles, including  Queen of the Underworld, Queen of the Night, and Queen of the Great Below.  As Inanna’s older sister, she is possibly one of the most ancient deities known.  In the relief below, she holds a rod and a ring as symbols of power, and possibly as an early ankh.  Animals associated with her include owls and lions, and she has beautiful owl-like wings and talons.

Ereshkigal was reportedly the only deity who could pass laws and judge others in her Sumerian times.  In later myths, created by Babylonians, Ereshkigal married the god Nergal and shared rulership of the underworld with him.  She is thought by some to have become syncretized as part of the ancient Greek goddess Hekate.

Hekate, Queen of Witchcraft and Titan goddess, has seen a stellar rise in prominence lately.  While she’s not known as a goddess of death per se, she has some deathly aspects, including guiding spirits of the dead.  Likewise, her magic comes from the underworld.   Hekate may be called upon to assist with souls traveling in the land of the dead.

In Haitian Vodou, Mamam Brigitte is the Queen of the Cemetery.  She’s a Haitian adoption of the Celtic goddess Brigit, complete with white skin and red hair, and is thought to have been brought to Haiti by servants from Ireland and Scotland.  Mamam Brigitte is the wife of Baron Samedi, and together, they are the “mother and father who reclaim the souls of the dead and transform them into lwa Ghede.”

New graveyards in Haiti dedicate the first woman’s gravestone with Mamam Brigitte’s cross.  She protects the dead and the living as well, giving people better lives through luck and fidelity.

Isis, the Egyptian goddess of “Great Magic,” was thought to have assisted the souls of the dead on their journeys and may have judged them as well.  Yet another maternal goddess commonly known as Mother Isis, she protects the dead, and heals and cures the living.  Isis is commonly shown with wings — she is thought to be a bird goddess, and her animal is the bird of prey.

The Hindu goddess Kali is known as “Night of Death” and “the changing aspect of nature that bring things to life or death.”  She is associated with “death… and, paradoxically in some of her later historical appearances, motherly love.”

She is thought to carry the spirits of the dead with her, although some believe that story is an allegory, because she only ever caused the death of demons and the ego, and thus, would not carry actual human spirits.  At the very least, she hangs out at cremation grounds and protects people from harm.  She is also known as Mahakali, the kind maternal goddess and divine mother.

This Fillipino goddess rules over both the sea and the underworld.  She helped create the first humans with the god of the sky, and guides the souls of the dead in a ferry boat to the underworld. She is loving, maternal, and calm; but if angered, she can be harsh and violent, as is seen in her great storms.

From around the world, goddesses of death enrapture their followers.  Common themes appear to arise amongst them, including maternal vibes, protection, birds/wings, and the potential for retribution if they judge anyone has done wrong by their followers.

I found it interesting that death goddesses are often said to be maternal and loving. It may seem ironic, but it’s a lesson in duality — pain and love can coexist together, and often do. When I feel the pain of losing a loved one, the death goddesses’ infinite compassion help me understand the loss and also my own heart a little better.

If you wish to worship any of them, approach slowly with much respect.  These deities are not often the easiest to get to know.  I hear very often that they will let you know if they’re interested in working with you. 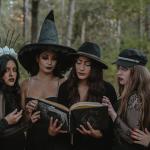 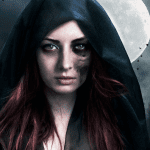