We are now at about two weeks since the documentary Francesco came out. This documentary misconstrued the Pope’s position on civil unions. The Vatican was slow to respond but now we have an official English version of the clarification they offered.

Skip to the second section if you already know the background.

First, a little background can be found in my two prior articles. This documentary had a bunch of clips of the Pope taken out of context and resown together to sound like something completely different. Pope Francis spoke of how parents should not kick children out because they have a “homosexual orientation.” This matches Christian charity and parental love. In making this description, Francis said that they “have a right to part of a family.” The context makes it blatantly obvious this was talking about parents and siblings, not some simulation of marriage.

The second thing Pope Francis said is that civil unions would provide the protections people seek via “gay marriages,” while keeping marriages only for one man and one woman. Francis said, “It is an incongruity to speak of homosexual marriage.” Then immediately noted a preferable alternative: “But what we have to have is a law of civil union, so they have the right to be legally covered.” However, the documentary cut this off just the last part to give a false impression. civil unions are only proposed as an alternative to “gay marriage.” Catholics may prudentially disagree on this strategy.

In my first article on this statement, I showed these are positions Francis has taken or implied before.

New Statement from the Nuncio / Vatican

The Nuncio Archbishop Christophe Pierre wrote a short introduction followed by an official Vatican statement. I will quote some lines and offer some notes.

More than a year ago, in the course of an interview, Pope Francis responded to two distinct questions at different moments that, in the said documentary, were edited and published as a single response without the necessary context, which has resulted in confusion.

I have noted that this was a TV interview broadcast in Mexico in the prior two articles and summarized it above. Then the statement takes on the two questions from the interview.

Those with Homosexual Relations Should not Be Disowned

For the First question, it quotes Amoris Laetitia 250:

During the Synod, we discussed the situation of families whose members include persons who experience same-sex attraction, a situation not easy either for parents or for children. We would like before all else to reaffirm that every person, regardless of sexual orientation, ought to be respected in his or her dignity and treated with consideration, while ‘every sign of unjust discrimination’ is to be carefully avoided, particularly any form of aggression and violence.

That seems to concur with Catechism about not discriminating against someone because of their sexual orientation.

A subsequent question during that interview pertained rather to a local law of ten years ago in Argentina, regarding irregular marriages of couples of the same sex and to the opposition of the then-Archbishop of Buenos Aires towards it. In this respect, Pope Francis affirmed “it is incongruent to speak of homosexual marriage” adding that, in such a precise context, he had spoken of the right of these persons to legal cover: “We must enact a law of civil unions: they have the right to be protect legally. I have defended this.”

This is what was said above that Pope Francis did not support civil unions but thought them a compromise he could live with as Archbishop rather than have his country approve “gay marriage.”

During a 2014 interview, the Holy Father expressed himself as follows: “Marriage is between a man and a woman. Secular States want to justify civil unions in order to regularize the various situations of cohabitation, driven by the necessity to regularize economic matters between persons, such as ensuring health care, for example. This relates to various forms of cohabitation agreement, which I would not be able to list. The different situations must be examined and evaluated, according to their circumstances.”

It is therefore clear that Pope Francis was referring to particular State provisions, and not certainly to the doctrine of the Church, which as been reiterated on numerous occasions over the years.

This seems to concur with what I was saying from the beginning, but which unfortunately the media has missed. Pope Francis approves of civil unions in place of “gay marriage not absolutely. Plus, this is simply a matter of state law while Church rules based on natural law remain.

As we come to the end of this saga, I hope a few lessons can be learned.

First, for Catholic media people and theologians, we have the responsibility to look for context and clarify situations so that others can understand them. This is far from the first time Catholic media has been complicit in the intentional misrepresentation of Pope Francis.

Second, for the Vatican, could you please pay attention and get a statement out ASAP if something like this comes out. Fr. James Martin, SJ, said on CNN that he had viewed the video beforehand and knew this would be the newsworthy line. I assume you did too. You could have asked for a change to the video to provide better context. Or you could have prepared the context and this explanation to come out sooner. Gerard O’Connell, a top Rome reporter, only got the text on Saturday when the news came out Wednesday and this notification came out about two weeks later after the news cycle has passed it.

Finally, I would suggest to secular media to look inside an organization for people to invite on to explain comments from someone in the organization. I got zero calls from media despite my initial post on this going viral. It is not just me, but I can think of about a dozen top public Catholics who likely would have helped you if you just looked in obvious places like Catholic social media. It took me a day to write what I did because I wrote a longer piece and I wanted a friend to review it before publishing. We can all do better.

Note: Please support me on Patreon so I can write more like this.

October 31, 2020
Ask Politicians About Assisted Suicide or It Becomes Law
Next Post 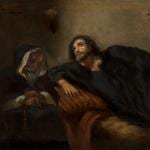 November 7, 2020 A Deacon Discouraged a Dying Woman from Confessing
Browse Our Archives
Related posts from Through Catholic Lenses