Interview: Sean Astin on His Faith and His Family

Interview: Sean Astin on His Faith and His Family October 1, 2013 Rebecca Cusey

Sean Astin comes into the press room on the set of Mom’s Night Out after a run. He’s slightly sweaty and red faced. Many stars would never face the press without hair done and stylist approved clothes, much less still glistening from a workout, but Astin plops down on a seat, smiles all around and fields questions as he downs a water bottle.

It feels like a backyard barbeque and this man is a genial host, friendly and open.

His ease is all the more amazing when one remembers Astin is Hollywood royalty, the son of star Patty Duke and a well-known actor in his own right, from Goonies to Rudy to the Lord of the Rings trilogy. The man grew up in the spotlight, which, as we know, often does not turn out well.

His upbringing is evident, however, when he talks about his family. He’ll prattle on all day about his pets, but ask him to connect his current role to his real life role as a dad, and he politely but firmly demurs.

This movie is like my family. The situations in the film are very like the situations we face. As recently as yesterday.

Um. Well we this weekend was chock full….I haven’t been spending much time at home, I’ve been all over the world, really. I came home. Next thing you know, I’m at the..

I can’t say. I don’t want to betray the trust of my kids.

Astin never does say what happened the day before. As it turns out, he’s a good dad. 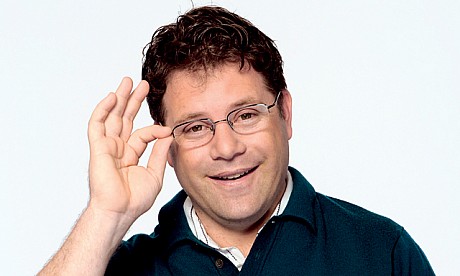 He’s also somewhat of a philosopher. The press in the room is religious press, and as they ask repeated questions to nail down Astin’s faith status, he gives profound but unconventional answers.

Asked about the faith of his mother, Patty Duke, he responds, “Depends what day you ask her.” But then he goes on to give a profound observation: “I know when my sister died, she insisted that, there’s this group of nuns that live in a convent near her, she insisted they be there. So when you talk about self-identifying verus how people practice versus their culture, I think my mom feels very comfortable with Catholicism.”

Astin isn’t interested in categories of faith because he knows that they way people act in reality often defies categorization.

The proof is in the pudding, as it were.

“Religion is most noticeable when someone dies. We all seem to experience a lot of death. Different generations, different tragedies, cancers, things. I think it snaps us back, always, to a keep appreciation for what formal religion can do to bolster families and communities.”

Astin says his own Christian faith “takes a long time to unpack,” but he and his family are baptized Lutherans, attend church, and he sends his daughter to a Christian high school.

Astin has no problem referring to Mom’s Night Out as a “Christian” movie. In fact, he worked on another movie he matter-of-factly calls “Christian:” Amazing Love. The debates and nuance of faith-based filmmaking don’t seem to affect him one bit. If he likes a project, he does it.

Secure in his fame, his family and his legacy, Astin isn’t really interested in debating divisions. He is more interested in drawing together. His current passion project, next to running marathons, is Vox Populi Radio, an occasional show in which Astin talks in depth about politics and issues. In one episode, he delved into the role of the Congressional Budget Office with talk show host Michael Medved. In another, he explores the Afforable Care Act.

Given his ability to discuss emotional and difficult issues and still be friendly and approachable, he should be a natural.

Read the transcript of the interview with Sean Astin here. 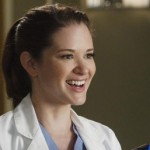 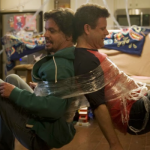 October 1, 2013 Inside 'GodlyWood:' A Day on the Set of a 'Christian' Movie
Recent Comments
2 Comments | Leave a Comment
Browse Our Archives
get the latest from
Family
Sign up for our newsletter
POPULAR AT PATHEOS Family
1

2 responses to “Interview: Sean Astin on His Faith and His Family”