Parvati: Everything You Need to Know

In honor of Navratri…

Parvati is a family Goddess, known for her wifely devotion to Lord Shiva. She has many other names and aspects. Often Durga, Shakti, and Kali might be considered other forms of Parvati.

As a Goddess of family and love, she is the one to turn to for help with marriage, parenting, and fertility. She has remarkable strength and determination. Some say that a worship of Shiva is useless without also worshiping Parvati.

How Shiva and Parvati Married

Shiva’s first wife killed herself and distraught Shiva withdrew from the world, meditating alone in a cave (some stories say that the original wife is reborn as Parvati). While Shiva was withdrawn, the demons were getting up to too much trouble making. The other Gods went to Shakti, pure female energy, who agreed to draw Shiva out again. She manifested as Parvati, daughter of the mountains, and set to work seducing Shiva.

For a while she tried beautifying his home and taking care of him quietly. She decorated the cave with flowers, sweep the floor, and bring fruits to Shiva. He would not stop meditating to even look at her.

She tried calling on Kama (a Cupid-like God) and he shot Shiva with arrows of desire, but Shiva just opened his third eye and turned Kama to dust (he was reborn later once Parvati won Shiva over).

Finally Parvati realized that to win Shiva’s heart, she had to relate to him by his interests and show him what she was made out of.

She began severe austerities, meditating naked in the harsh elements, eating nothing. Her austerities were every bit as severe as Shiva’s and she also mastered her mind and body. Shiva was very impressed and accepted her as a wife. She inspired him to care about the world again.

There are a few different stories of Ganesha’s birth, but the most well known one is that Shiva’s wife Parvati wanted to take a bath while Shiva was away but there was no one to guard the door. So she formed a little boy from clay and breathed life into him. She instructed him not to let anyone in while she bathed.

A little while later Shiva returned and was furious that the boy at the door would not let him in to see his wife. In his rage, he cut off the boy’s head. Parvati came rushing out and was horrified by what Shiva had done. She told him that this was their son.

Full of remorse, Shiva hurried to find a replacement head and a young elephant was the first creature he came across. So he took the elephant’s head to restore Ganesha and brought him back to life.

The Churning of the Ocean

Parvati has a role in the famous churning of the ocean story also. When Shiva swallows the poison that the churning released, Parvati rushes in to catch hold of his throat. She prevents him from swallowing the poison and it stays in his throat, turning it blue.

There are many different styles of picture of Parvati. Often she can be seen as the family woman, with Shiva at her side and young Ganesha in her lap.

Other times she is in the form of Durga: dressed in red, riding a lion, her arms full of weapons. The red represents purity and powerful destruction of evil. The weapons destroy ignorance, evil, and ego.

At times she is shown carrying the trishula trident, same as Shiva. Its three prongs are said to represent the three gunas/qualities: tamas, rajas, and satwa.

Navratri seems to be the only holiday in which forms of Parvati are explicitly worshiped. Durga, Shakti, and Kali might all be honored during Navratri and they and Parvati are all connected.

One thing that people turn to Parvati for is to solve any delays in marriage. The Swayamvara Parvathi Mantra is said to bring marriage, or resolve conflict between couples, or help prevent miscarriage.

Instructions say to recite this mantra 1008 times for 108 days in a row, so it is quite a commitment. It is said that this will build up the high amount of energy needed for the mantra to work.

Start with a Sankalpa, a vow, promising to do this practice for the full 108 days.

Recite the 1008 repetitions focusing only on God and peace, avoiding thinking about any problems: 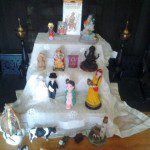