“We’re Already Living in a Tree”: Eco-Consciousness and a Life Worth Living

“We’re Already Living in a Tree”: Eco-Consciousness and a Life Worth Living November 1, 2014 John Halstead

From Self-centric Paganism to earth-centered Paganism

That was my wife’s recent response to my awkward attempt to tell her about the spiritual/emotional/psychological transition I am experiencing recently.  From someone else, I might have taken offense, but I knew she meant it.  That’s my wife — supportive and pragmatic.  She’s always been a “where the rubber meets the road” kind of gal.

It’s hard to put my finger on where it all started.  But over the past eight months or so, since Pantheacon, I have felt my spiritual orientation shifting from a mostly Self-centric practice to an increasingly earth-centered practice.  Actually, that statement is really misleading, because it implies that the two are different things.  This paradigm shift I am experiencing is more like the realization that Self and earth are not two things — something I’ve understood intellectually before, but am really experiencing now.  I was aware, in theory, that a Self-centric practice could lead to an earth-centric one, but now I’m living it.  It may seem counter-intuitive, but while Self-centric Paganism does lead “within”, ideally the path into the depths of one’s soul opens up on the other side to the world.  I think I’m starting to push through to the other side finally.  I guess deep ecologists call this the realization of one’s eco-self, ecological self or “more-than-human self”.  But those are just words.  The experience is something else altogether. 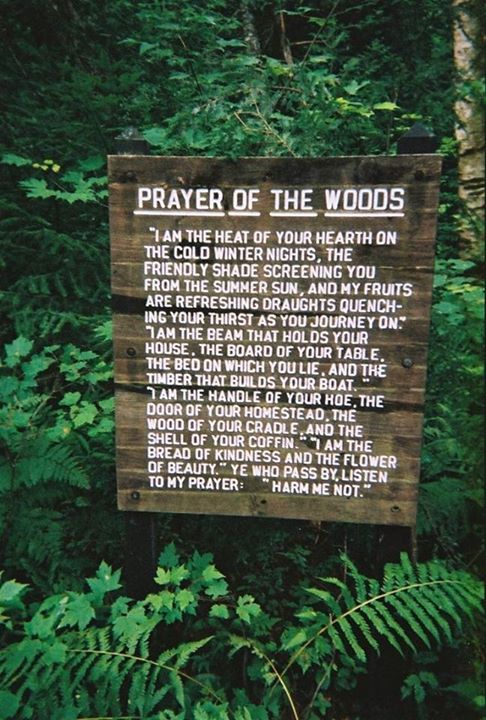 Several events have helped push me along my way, including …

It’s been a busy year.  And then there was the smell of burning leaves on the crisp autumn air last week.  And the taste of raspberries from the plants in my backyard, and some of the last tomatoes from my garden.  And the sound of wild geese flying south, “announcing my place in the family of things.”   And dozens of other “ordinary” experiences, which I have a tendency to leave out.  I can be overly cerebral when I reconstruct important events in my life and leave out these visceral experiences, which are at least as important, I think.

“We are already living in a tree.”

All of this culminated in my attempt to explain this shift to my wife the other day.  “If you want to go live in a tree, just let me know,” she said.  I didn’t know how to respond at the time.  Later, as I reflected on it, I thought, “We are already living in a tree.”  I think that insight might sum up the shift in perspective I am experiencing.

I suppose one might take a statement like that metaphorically, I meant it quite literally.  We are already living in a tree.  Not in the way Julia “Butterfly” Hill lived in a tree, but in another, no less literal sense, I think.  Our house is made of wood … and thus, of trees.  The floors we stand on are made from trees.  The walls are framed by wood from trees.  The roof built of wooden beams and planks from trees.  In a very real sense, I am living inside of trees.

You may find that statement obvious … mundane and pedantic even.  But to me it seems profound, because it really isn’t obvious to me, not in the course of my day-to-day life at least.  You see, I live in the illusion of separateness from nature … an illusion created by artifice.  I am surrounded by “artificial” objects and structures that don’t seem to be a part of “nature” — but they are.  Even the ubiquitous plastics ultimately originate from organic sources, and even inorganic metals are part of the earth.  All of this is “nature” … even me.  Even my body.  Even my thoughts and feelings are grounded in the electrochemical reactions of my brain, heart and gut.

“Living what is not life”

But that is not my ordinary way of perceiving reality.  Even though I don’t believe it, I still move through the world as if I were a “ghost in a machine” and the world just a collection of objects “outside” of me.  I am coming to believe that this illusion of separateness is crafted and maintained deliberately — not by a cabal of Illuminati in smoke-filled rooms, but by all of us, individually and collectively, in an effort to avoid the ineluctable fact that we are all going to die someday.

We hide from ourselves our immersion in nature.  We do this by surrounding ourselves with artifice — things which are nature, but appear to be otherwise.  So much so that I can forget that I am already living in a structure made of trees, that something died so I could have shelter.  Just as I eat prepackaged food so that I forget that something died to sustain me.  I do this so can bury a little deeper the knowledge that I myself will die and be someone else’s food — and perhaps millions of years from now be a part of someone else’s shelter.

The trick is to keep this knowledge — this feeling — in the forefront of my mind, to resist the inertia of existence which forces it into the background.  That’s been hard.  I’ve been struggling to resist the draw of distractions which seem to place invisible barriers between me and that experience of participation.  “I did not wish to live what is not life,” Thoreau famously wrote.  What insight is in that simple statement: that it is possible for human beings to live what is not life … and that this should be the most ordinary of things for us, that we must actually exert effort to do otherwise!

And when I manage to hold it, then comes the really hard question … how to live with this knowledge?  What does this mean for my day to day life? — that’s what my wife wants to know.  One of the commenters to another post tells me it’s all futile and that my use of a computer to blog about this makes me a hypocrite.  Selectively changing individual consumption habits may not avert environmental catastrophe brought on by global warming, but are there other reasons to change?  I think there are.  I think about that story of the boy and the old man on the beach and I think, perhaps it is not a question of our saving the lives of all the starfish or even of individual starfish, but of the starfish saving our lives.  Perhaps there is no better reason than that I no longer want to live in a world that has had all the life methodically sucked out of it, a sterile world of things and not beings. Perhaps there is no better reason than that fleeting, but very real feeling of being a temporary knot in the immense web of life, a feeling that I think jurist Oliver Wendell Holmes, Jr. was describing when he said:

“Life is a roar of bargain and battle, but in the very heart of it there rises a mystic spiritual tone that gives meaning to the whole. It transmutes the dull details into romance. It reminds us that our only but wholly adequate significance is as parts of the unimaginable whole. It suggests that even while living we are living to ends outside ourselves.”

November 10, 2014 Interstellar and Capitalism: Imagining a Different Future
Recent Comments
0 | Leave a Comment
"Ironically, the pagans have stumbled upon evidence that there will be an Armageddon exactly when ..."
The Penitent Man Shall Pass Call for a Pagan Community Statement ..."
"John H.Halstead...Someone wrote or said. Be the change you want to see in the world. ..."
Toni Stamps 13 Things You Don’t Need to ..."
""petty and defensive"?: "Are you foolish enough to think christianity is the elder?""
John H Halstead 13 Things You Don’t Need to ..."
"Attack? This isn't my faith :)Is it yours? You come accross more christian....petty and defensive."
Toni Stamps 13 Things You Don’t Need to ..."
Browse Our Archives
get the latest from
Pagan
Sign up for our newsletter
POPULAR AT PATHEOS Pagan
1