I recently posted about the historic devotion to the Virgin Mary, and the range of alternative writings and even pseudo-gospels that it inspired. These texts made Mary a close facsimile of Christ, with a comparably miraculous story of conception, birth, death and (in a sense) resurrection. Mary’s birth-story is described in the Protevangelium, and the accounts of her passing from the world in the Six Books Apocryphon or the De Transitu Virginis. But it’s a legitimate question: if these works are utterly unhistorical (as they assuredly are) why should anyone care about them? That question is all the more telling when they present an aspect of Christianity that Protestants at least find unsettling, or even appalling. Let me suggest why we really need to understand these traditions.

By the way, I’m going to be speaking about the “cult” of Mary. That’s not meant to be judgmental or rude, it’s the correct technical term for a particular form of veneration or worship. 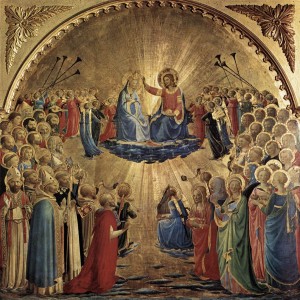 Just taking the accounts of Mary’s passing, let me say right away that these texts do not have the appeal of many apocryphal works, which often include quite beautiful stories and high-quality writing. They are wordy and heavy-handed. But for several reasons, they are important reading for anyone interested in Christian history – and not just Catholic history:

1.Works like the De Transitu are immensely significant as historical sources. They tell us nothing whatever about the life or death of the Virgin Mary herself, and church writers throughout the centuries emphasized that ignorance. In the fourth century, bishop Epiphanius noted, cautiously, that nobody knows if or whether Mary died, nor if she was buried, nor the location of her grave. But the fact that these works were written, and became the international bestsellers of their age, tells us a great deal about the Christian world at that time, roughly the fourth and fifth centuries – and about the next millennium, when they continued to read and copied. Why did this interest emerge so powerfully at the time it did? What made Mary’s cult so enormously attractive?

2.This statement might be unfair, but I think many Protestants dismiss the cult of Mary as “medieval” or “Catholic,” something that grew after the much-venerated Primitive or Early Church, which presumably became hopelessly tainted after making its alliance with Constantine’s Roman Empire. That’s simply wrong. The Protevangelium was written no later than the 170s, and highly supernatural interpretations of Mary’s passing were being offered in the third and fourth centuries. They were reaching full flood around the time of St. Augustine, or the era of the councils of Ephesus and Chalcedon.

3.Building on that point, there just is no sharp or obvious break between the early and medieval churches, either in East or West. It’s much better to follow Peter Brown’s classic structure of Late Antiquity, running from roughly the third century through the eighth or so. And the cult of Mary was a central and characteristic feature of that age.

4.The continuity from early through medieval times really challenges popular views about the role of women in Christianity. The myth holds that in early times, the church venerated strong female figures like Mary Magdalene, who starred in alternative gospels that the churches then suppressed, out of a fear of uppity women. In fact, texts like the Protevangelium, focused on the Virgin Mary, predate most of the pseudo-gospels of the Magdalene. And if the Magdalene’s stock declined, that of the Virgin rose steadily. Throughout the Middle Ages and beyond, the mainstream church made a supernatural female figure absolutely central to its belief system and its everyday practice.

5.The pseudo-gospels of the Virgin demonstrate a vigorous and uncompromising feminization of the Christian story. It was quite possible to read a complete cycle of the Virgin that took virtually everything attributed to Christ and transferred it to this mighty and godly woman. In devotional practice, Mary for well over a thousand years became the second Christ, a co-Christ. If the church officially drew a strict distinction between the worship due to Christ and the veneration due his Mother, that division collapsed in practice.

What does that feminization tell us about the appeal of Christianity? It’s too easy to explain it in terms of the church compromising its beliefs in the face of older pagan beliefs or customs. The Marian pseudo-gospels are deeply rooted in Jewish and early Christian traditions, long before the church made mass conversions in pagan Europe.

6.It is not easy to speak of “the average Christian.” Throughout history, though, we can speak generally about which churches claimed the largest number of adherents at any given times, and in which places. Based on that, we can say that for a very large share of the world’s Christians who have ever lived, this supernatural Mary – with all the legends and the ritual calendar – was an integral part of the belief system. Moreover, that generalization about the weight of numbers holds true today.

Almost at random, I take a painting of the Assumption by Pietro Perugino (1446-1524), an older contemporary of Martin Luther. 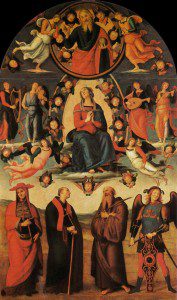 For most Protestants, the work can be admired aesthetically or valued as a component of art history. How hard it is to imagine that many millions today take the ideas represented in the painting very seriously.

7.I offer this last point as a basis for debate.

Stories like the Assumption tell us a great deal about the formation of Christian doctrine and belief. They are not grounded in the Bible – or if so, very tenuously – but rather depend on the church’s developing body of tradition and belief, as argued and negotiated over the centuries. In theory, Protestants demand a scriptural basis for major doctrines, but in fact they realize that it is exceedingly difficult to rely on scripture alone for such key doctrines as the Trinity, or the Chalcedonian definition of the Incarnation. Rather, these ideas rely on the collective wisdom and tradition of the early church, as expressed in the works of the Church Fathers and the great Councils – usually, the first four, held between 325 and 451. However, the churches of the fourth and fifth centuries already accepted beliefs and practices that today we might consider quite medieval, including in their attitudes to the Virgin Mary.

So at what point did “tradition” cease to be valid as a source for doctrine?

September 16, 2013 Should Christians mind how babies come to be?
Recent Comments
32 Comments | Leave a Comment
"I take what Jesus said as to what my faith should be:"The Father makes his ..."
james warrren Who Will Be Saved? – The ..."
"I was tracking with you, appreciating the points until this statement: "It has become a ..."
LKaaren I’m Sorry, But You’ve Been Canceled
"A similar dilemma exists when reading the parts of the Psalms where the psalmists talks ..."
Curt Day Jesus, Genocide, and the Canaanites
"Authorized group? What is the authorized group that censors the ministers in question? For the ..."
the old scribe I’m Sorry, But You’ve Been Canceled
Browse Our Archives
Related posts from Anxious Bench