Clemson vs. The Secularists

The football program at my beloved alma mater, Clemson University, has become the target of legal threats by the militant secularist/atheist group, the Freedom From Religion Foundation. This group trolls about the country, looking for evidences of religion in public life, and threatening lawsuits whenever such evidences are discovered.

Clemson’s coach Dabo Swinney is an outspoken Christian, who is accused of employing a chaplain, sharing Scripture with his players, and inviting players to church. This pattern of behavior, the FFRF contends, is inappropriate for a public university employee, and violates the First Amendment’s establishment clause.

We might laugh off the FFRF’s threats as typical secularist hi-jinks, except that threatening lawsuits has become the most successful approach for secularists over the past fifty years, and it has scored incremental victories to restrict religious speech and the free exercise of religion. In the absence of legislative or popular support for their agenda, they intimidate public employees into silence, and occasionally find sympathetic judges to agree with their peculiar interpretation of the First Amendment.

Clemson, says the FFRF, is exhibiting an institutional preference for “religion over nonreligion.” I suspect many Clemson alumni might chuckle at that one. I, like most public university students, took classes with a number of Clemson professors (including at least one religion professor) who were overtly hostile to faith perspectives, and who obviously preferenced nonreligion over religion. I had two professors at Clemson who, by contrast, spoke directly about their faith as Christians. No problem – at a university, it is ok to have different perspectives represented. I don’t recall that the FFRF has ever sued a university, Clemson  or others, for preferencing nonreligion over religion because of the views of a secularist professor…and it never occurred to me to seek a lawsuit because of the times when I did not share the opinion of such secularist professors.

Sports teams are, of course, very different settings from a university classroom. Any coach worth his or her salt is not only trying to win games, but to invest in the lives of players. For people of faith, such investments naturally mean directing players to one’s own faith. As a matter of propriety, Clemson officials should expect that Coach Swinney not be rude or discriminatory toward his players, but this is a requirement that should apply on a whole range of issues (politics, ethnicity, etc.), not just faith. Fairness makes for good education, business, and manners.

Clemson’s players choose to go there, and many of them do so precisely because of the sort of person that Dabo Swinney is. These players are adults, and as highly recruited athletes, they have a number of options of where to go. Construing Swinney’s actions as a violation of the First Amendment (only of the establishment clause, of course – secularists are less keen on the requirements of “free exercise”) shows just how warped the secularist reading of religious freedom has become.

To the Founders, an “establishment of religion” meant a tax-supported denomination like the Church of England, not the public presence of religion. The Founders employed chaplains in Congress and in the army, and routinely welcomed prayers (and even sermons) in government venues. Dabo Swinney is on solid constitutional ground when he represents his faith today at Clemson University. 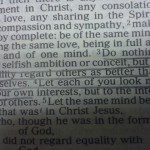 April 23, 2014 Christian Humility? In Academia?
Recent Comments
18 Comments | Leave a Comment
"Thank you for the insights. As you pointed out, technology has been a two edged ..."
the old scribe Is Religion Naturally Averse to Technology?
"I suppose the question is whether or not the Holy Spirit could use technology to ..."
Nimblewill Is Religion Naturally Averse to Technology?
"What a great post, Allie! Insightful and eloquent."
Ansley Every Day People in Every Day ..."
"Impressive article. Provides the necessary perspective for entering into an informed discussion about the science/religion ..."
the old scribe Science, Religion, and Nineteenth Century Protestantism
Browse Our Archives
Related posts from Anxious Bench

Evangelical
Royalty Chic and the Upside Down Kingdom
Anxious Bench