WALKING ON THE WATER

I recently posted on Jesus’s Resurrection appearance in John 21, where the disciples meet him at the Sea of Galilee. I argued that this scene, or something like it, was the very oldest version of the Resurrection story as it would have been known, for instance, to Paul around 50AD, and that it long predated the familiar story of Jesus meeting Mary Magdalene in the garden. We miss this point because the present structure of the Fourth Gospel lets us read the Galilee story as a later appearance, as Jesus’s visit to his faithful followers.

Whatever we make of that idea, there is no doubt that this scene is presented as a post-Resurrection appearance. Others have suggested that the same incident might also be depicted in the Gospels in another setting, but where the story’s original context has become confused.

Rudolf Bultmann and others  suggested that other early Resurrection appearances survive in the Gospels in the form of stories that are now associated with Jesus’ lifetime. The Transfiguration (Mark 9) is the best known example of such a possible “displacement.” Here, though, I’m referring to the famous scene when Jesus is seen walking on the water (Mark 6: 47-51, Matt. 14.22-33, John 6.16-21), which is generally listed among the miracles Jesus performed during his lifetime. Plenty of scholars through history have noted the resemblances between this scene and the acknowledged post-Resurrection appearances, especially that in John 21. Here are some obvious parallels. 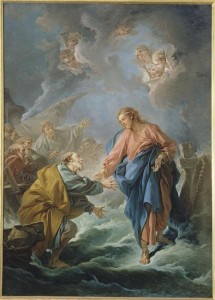 *In both, the setting is the Sea of Galilee, and the disciples are aboard ship. Both stories give the time as early morning. 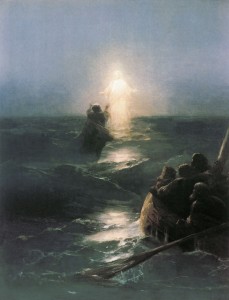 *When they see Jesus, they think he is a ghost (phantasma: Mark 6.49, Matthew 14.26). This is an interesting choice of words. In Luke, the disciples meeting the risen Christ think he is a ghost or spirit, pneuma, which Jesus disproves by eating some fish (Luke 24.37). However, some very early writers use other words in place of pneuma in this verse. Not much after 100AD, Ignatius thought Jesus had denied being a “bodiless daimon,” but Tertullian a hundred years later thought that Jesus had denied being a phantasma. Phantasma is a common alternative reading, which also appears in some ancient gospel texts, especially in the “Western” tradition. Put another way, Mark and Matthew say that the disciples initially thought that Jesus walking on water was a supernatural being, and used exactly the same word that was commonly used in one of his documented post-Resurrection appearances. 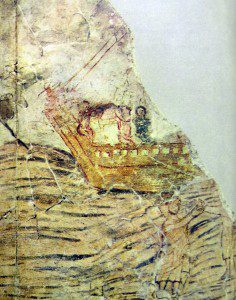 *Jesus tells them not to be afraid (me phobeisthe), “It’s me” (or “I am,” ego eimi). The same words for “Don’t be afraid” are used by the angel meeting the women at the tomb, and then by the Risen Jesus himself (Matt. 28.5, 10). The ego eimi phrase is usually characteristic of John, and it is often taken to suggest a claim to divine status.

*The Resurrection context is strongly apparent in Matthew. Matthew (alone) makes the parallel much stronger than Mark or John by stressing Peter’s central role. As in John 21, it is Peter who leaves the boat to meet Jesus. 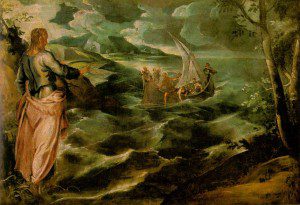 *Matthew, again, adds dialogue that strongly recalls post-Resurrection appearances. Jesus, for instance, asks Peter “Oh you of little faith, why did you doubt?” Although the verbal parallels are not close, this obviously suggests a scene like Jesus’s encounter with the Apostle Thomas in John 20.

*Matthew also enhances the resemblances by describing the disciples’ reactions to the event, which far exceed the effect of any other miracle, even raising from the dead. They worshiped him (prosekunesan), saying “Truly, you are the Son of God.” This conclusion seems to fit far better a Resurrection appearance than a mere miracle, even a spectacular one.

I suggest, then, that an early version of the key Resurrection appearance has morphed into a miracle story, and is thus remembered by Mark, Matthew and John. Matthew, though, stands out because either he recognized the tale’s original context, or else he knew a variant of it.

Either way, I repeat the conclusion of my earlier post: As we commemorate Easter, we should think at least as much of the Sea of Galilee as the Jerusalem garden.

April 22, 2014 Clemson vs. The Secularists
Recent Comments
2 Comments | Leave a Comment
"Could it be that we fixate on the West because Eastern sources for history hardly ..."
Roger McKinney Shedding Our Eurocentric Bias: The Gains ..."
"Perhaps it is proper to say Jesus is not a die-hard lefty, as Chaplain Blake ..."
Harvey James Johnson Liberation Theology for White People: The ..."
"Very interesting topic! I hope students follow your advice! I have been amused by Catholic ..."
Roger McKinney A Forgotten Hatred: Why Don’t We ..."
""Said even more strongly, the assumption is that if one thinks that the Gospel is ..."
Chaplain Blake Liberation Theology for White People: The ..."
Browse Our Archives
Related posts from Anxious Bench