Following on from my book The Great and Holy War, I have been working on the religious and apocalyptic aspects of the First World War, and have recently posted on some major popular culture items from that time. I find myself concentrating on 1916, the year of Mr Britling Sees It Through and The Brook Kerith.

The religious upsurge of that year when we consider the massively rising casualties, and the seemingly endless nature of the struggle. Barring divine intervention, what could save the Western world? It was in 1916 that D. W. Griffith released the blockbuster film Intolerance. Griffith addressed the theme of intolerance as it had manifested in several eras of history, from ancient Babylon and the time of Jesus through the European religious wars, and on to the United States in his own day. 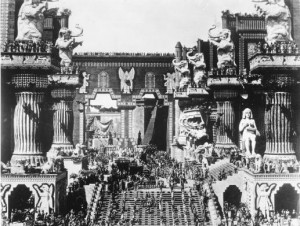 After the twin climaxes of the fall of Babylon and Christ’s Crucifixion, a final scene shows trench warfare on the contemporary western front. Suddenly, though, a celestial vision ends the fighting. As soldiers see angels appearing in the skies, they lay down their arms, initiating a utopian postwar world of harmony and innocence, a millennial peace. Intolerance brought the contemporary war into the apocalyptic framework familiar throughout Christian history (the fall of Babylon is a key moment in the book of Revelation)

Meanwhile, visionaries and religious thinkers in all the leading nations envisioned imminent apocalypse. These themes were popularized worldwide through the work of Spanish author Vicente Blasco Ibañez, whose 1916 novel The Four Horsemen of the Apocalypse—one of the war’s literary triumphs—depicted the Miracle of the Marne. It was a global best-seller. A 1918 translation took the popular title on to new glories in the English-speaking world, particularly given its strong anti-German slant. In the United States alone, the book sold half a million copies in its first year of publication, and it easily topped the bestseller charts.

But for Blasco Ibañez, apocalypse was far more than merely a colorful synonym for mass destruction. In an extended scene set in August 1914, the Russian mystic Tchernoff explains the conflict explicitly in terms of the Revelation expounded to Saint John:

Like many French Catholic thinkers, Blasco Ibañez identifies the Beast with German militarism. 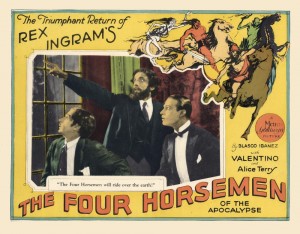 But the book’s influenced endured into peacetime. One of the most successful films of the silent era was the 1921 production of The Four Horsemen of the Apocalypse. In cinematic history, the film is best recalled for making a megastar out of Rudolph Valentino. The film would not have been made if not for the enthusiasm of screenwriter June Mathis, a devout believer in the occult who was enthralled by its apocalyptic and uncanny themes. 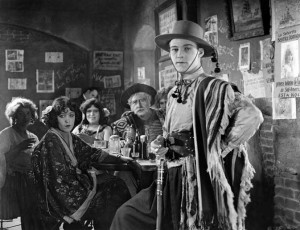 The cinematic version not only retained the novel’s heavy reliance on Revelation but also used this as the essential framework of the war narrative. Throughout, the film interpreted the war in terms of “the breaking of the Seven Seals of Prophecy,” “the age of fulfillment,” and “the Angel of Prophecy.” The four horsemen themselves appear literally and repeatedly, riding through the heavens over the battlefields. Even the Beast appears on screen, as a fire-breathing behemoth unleashed on the world in 1914. This mystical blockbuster earned over four million dollars at the box office, a huge sum at the time.

As Griffith had already discovered, how else could one understand the cataclysm if not in such cosmic terms?

June 7, 2014 A Primer on the Southern Baptist Convention, Part 2
Recent Comments
2 Comments | Leave a Comment
Browse Our Archives
get the latest updates from
Anxious Bench
and the Patheos
Evangelical
Channel
POPULAR AT PATHEOS Evangelical
1