I have been posting on some books that appeared during the First World War – books by Wells, Moore, and Machen – but one contribution from that time was one of the most daring and, we might even say, prophetic. Amazingly in light of his later reputation, the author in question was John Buchan. His strange and truly unsettling novella, The Power-House, can still force you to rethink the nature of the world you inhabit. It includes what has been described as one of the most genuinely shocking and subversive scenes in English literature, which is all the more startling because of the source.

In the early twentieth century, Buchan was a phenomenally popular author of adventure fiction, commonly focusing on spies and international intrigue. The Thirty-Nine Steps (1915) was perhaps his best known work, and the most filmed. His books were deeply unfashionable when I was growing up, because they seemed so turgid compared to those of Ian Fleming, say. When set aside James Bond, Buchan heroes like Richard Hannay and Edward Leithen looked like boring upper class twits from a snobbish clubland England that was, happily, long-dead. And oh my, how badly most of them have dated, in language above all, not to mention in matters of gender, class and race. 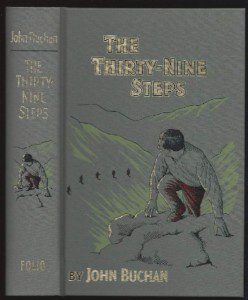 First published in magazine form in 1913, The Power-House saw publication as a book in the Spring of 1916, and by the end of that year, it had sold an impressive 24,000 copies, proving yet again that conspiracy paranoia always sells. It is available online full text.

At first sight, The Power-House looks like familiar territory. Leithen discovers the evil plotting of Andrew Lumley, a wealthy Englishman who leads an international anarchist organization called the Power-House – a distant ancestor, perhaps, of Fleming’s SPECTRE. Lumley hopes and plans to destroy Western civilization. There are parallels with the vision of anarchism in G. K. Chesterton’s 1908 novel The Man Who Was Thursday – although Buchan’s vision is vastly more sinister.

To imagine what Buchan thought of anarchism, we should think not of idealistic philosophers but of a mixture between global terror networks like al-Qaeda, and mass anti-globalization protests like Occupy, with a dose of Wikileaks thrown in. 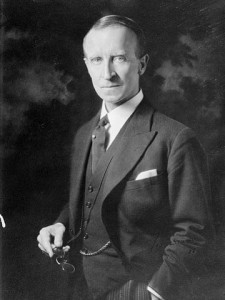 Lumley believes that he can achieve his goal easily enough, because civilization is far weaker than anyone imagines. It will yield to pressure properly applied. As he asks,

“Did you ever reflect, Mr Leithen, how precarious is the tenure of the civilization we boast about?”

“I should have thought it fairly substantial,” I said, “and the foundations grow daily firmer.”

He laughed. “That is the lawyer’s view, but, believe me, you are wrong. Reflect, and you will find that the foundations are sand. You think that a wall as solid as the earth separates civilization from barbarism. I tell you the division is a thread, a sheet of glass. A touch here, a push there, and you bring back the reign of Saturn.” 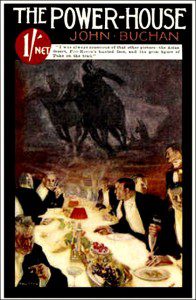 These dialogues between criminal mastermind and heroic secret agent offer some of book’s most fascinating passages. Given Buchan’s position as an ultimate Establishment insider, it’s disturbing to see how he can imagine the mindset of the anarchist plotter. Yes, says Lumley, he runs a conspiracy, but he is not the only one:

“Civilization is a conspiracy. What value would your police be if every criminal could find a sanctuary across the Channel, or your law courts, if no other tribunal recognized their decisions? Modern life is the silent compact of comfortable folk to keep up pretenses. And it will succeed till the day comes when there is another compact to strip them bare….”

“Civilization knows how to use such powers as it has, while the immense potentiality of the unlicensed is dissipated in vapor. Civilization wins because it is a world-wide league; its enemies fail because they are parochial. But supposing … supposing anarchy learned from civilization and became international.

“Oh, I don’t mean the bands of advertising donkeys who call themselves International Unions of Workers and suchlike rubbish. I mean if the real brain-stuff of the world were internationalized. Suppose that the links in the cordon of civilization were neutralized by other links in a far more potent chain. The earth is seething with incoherent power and unorganized intelligence.”

Things can change very easily, and rapidly, and that is never more true than in a globalized technological world:

“A little mechanical device will wreck your navies. A new chemical combination will upset every rule of war. It is the same with our commerce. One or two minute changes might sink Britain to the level of Ecuador, or give China the key of the world’s wealth. And yet we never dream that these things are possible. We think our castles of sand are the ramparts of the universe.”

(Yes, I know the idea of China gaining the key to the world’s wealth is too ludicrous to be taken seriously).

“All that is needed is direction, which could be given by men of far lower gifts than a Bonaparte. In a word, you want a Power-House, and then the age of miracles will begin.” 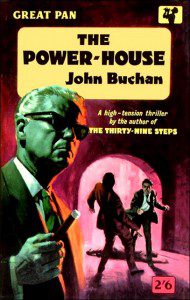 And then there is that scene I mentioned earlier. As Leithen pursues the Power-House, he is walking a respectable central London street, where everyone observes the proprieties. Stern but fatherly police officers stand ready to discipline the criminal, or to remonstrate with the ill-mannered. Nothing can go wrong.

And gradually he realizes that anyone and everyone in the crowd might be an agent of the Power-House. Everyone is against him. Everyone is an anarchist:

I was alone in that crowd, isolated and proscribed, and there was no help save in my own wits. If I spoke to a policeman he would think me drunk or mad, and yet I was on the edge of being made the victim of a far subtler crime than fell within the purview of the Metropolitan force.

Now I saw how thin is the protection of civilization. An accident and a bogus ambulance — a false charge and a bogus arrest — there were a dozen ways of spiriting me out of this gay, bustling world….

Here there were fewer people, and several queer things began to happen. A little group of workmen with their tools were standing by the kerb, and they suddenly moved towards me. A pavement artist, who looked like a cripple, scrambled to his feet and moved in the same direction. There was a policeman at the corner, and I saw a well-dressed man go up to him, say something and nod in my direction, and the policeman too began to move towards me.

I did not await them. I took to my heels and ran for my life down Grosvenor Place.

That tearing noise you hear is the rending of the fabric of all known reality.

This is one of the great literary descriptions of paranoia: “I was alone in that crowd, isolated and proscribed.” The reader might even think, for a moment, that perhaps Leithen really is paranoid, and all his visions of vast global plots are delusions. Perhaps there really is no international anarcho-terror conspiracy outside his own crumbling mind? How very unlike the stolid Buchan characters we think we know.

As I argue in my current book The Great and Holy War, books like The Power-House illustrate the strongly apocalyptic mood of the time, and also the rampant conspiracy theorizing of those years, the quest for deep-laid enemy plots against Nation and Race. Both trends would bear rich and disastrous fruit in the extremist movements of the decades following 1918. 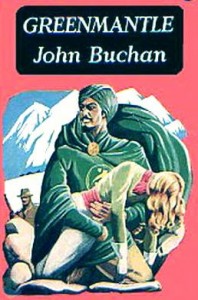 July 13, 2014 THE FLIGHT OF THE DINGBATS
Recent Comments
4 Comments | Leave a Comment
Browse Our Archives
Related posts from Anxious Bench