Angels at the Dead Sea

My recent posts concerned angels, and specifically when and why they acquired names and individual identities. Angels are fully developed characters in 1 Enoch, probably from the third century BC, and that text was well known in the community that produced the Dead Sea Scrolls. That group had a special interest in angels and their doings, and their role in cosmic warfare.

Time and again, we find linkages between the Dead Sea sect, the Essenes, and the world of 1 Enoch. One economical explanation is that the Essenes produced the Enochic literature, and the Dead Sea community then spun off from that mainstream. (See especially the work of Gabriele Boccaccini). 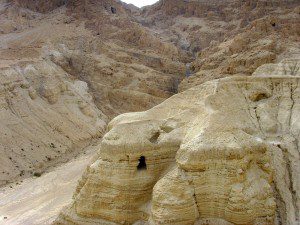 The Dead Sea community preached a radical separation between the forces of Light and Darkness, which struggle in the world until the apocalyptic Judgment. In the words of the Community Rule,

Now, this God created man to rule the world, and appointed for him two spirits after whose direction he was to walk until the final Inquisition. They are the spirits of truth and perversity. The origin of truth lies in the Fountain of Light, and that of perversity in the Wellspring of Darkness. All who practice righteousness are under the domination of the Prince of Lights, and walk in ways of light; whereas all who practice perversity are under the domination of the Angel of Darkness, …  the God of Israel and the Angel of His truth are always there to help the sons of light. It is God that created these spirits of light and darkness and made them the basis of every act, the [instigators] of every deed and the direction and the directors of every thought.

Both those leading figures are angels. Evil is under the command of Belial, while a good angel serves as Prince of Light. This figure is often identified as Michael. (See for instance Maxwell Davidson, Angels at Qumran (Bloomsbury T&T Clark, 1992).

Lesser angels occur sporadically in many of the texts and fragments, often in ways that recall 1 Enoch. In 4Q 180-181, we find references to both Raphael and Azazel. Also from Qumran was the Angelic Liturgy, which imagined seven angelic beings, godlike elohim, holding sacrifices in a Heavenly Temple.

Scholars disagree about the relationship between the Qumran sect and the Essenes as described by Josephus, in the Jewish War. In that account, though, there is one interesting angelic reference. After listing the requirements to be met by a candidate for membership in the sect, Josephus writes,

Moreover, he swears to communicate their doctrines to no one any otherwise than as he received them himself; that he will abstain from robbery, and will equally preserve the books belonging to their sect, and the names of the angels. These are the oaths by which they secure their proselytes to themselves.

One of the most significant finds from Qumran was the War Rule, less an apocalypse than an elaborate militaristic fantasy about how the Sons of Light will prepare for combat against the Sons of Darkness. Scholars disagree whether the evil enemies portrayed in the text are more likely to be Seleucid Greeks or Romans, so that the work’s composition has variously been dated between 170 BC and the time of Jesus. A late second century BC date is most likely. 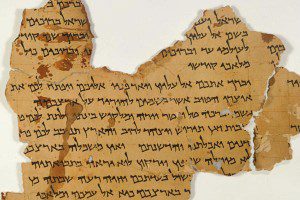 Whatever the date, the author had definite opinions about angels. The War Rule instructs the followers of righteousness to have no fear, because they follow a mighty leader:

Today is [God’s] appointed time to subdue and to humiliate the prince of the realm
of wickedness. He will send eternal support to the company of His redeemed by the power of the majestic angel of the authority of Michael. By eternal light He shall joyfully light up the covenant of Israel peace and blessing for the lot of God, to exalt the authority of Michael among the gods and the dominion of Israel among all flesh. Righteousness shall rejoice on high, and all sons of His truth shall rejoice in eternal knowledge.

Angels fight alongside God’s warriors, and those warriors will seek angelic protection:

There shall be three gates to a tower, one on [the right and] one on the left. Upon all the shields of the tower soldiers they shall write: on the first, Mi[chae]l, [on the second, Gabriel, on the third,] Sariel, and on the fourth Raphael. Michael and Gabriel on [the right, and Raphael and Raphael on the left.

Readers of the War Rule would have been quite comfortable with Jesus’s references to the legions of angels whom God would send to defend his Son, should he so choose (Matt 26.53). As in the Rule, Jesus’s angels are organized in military formation. Nor would those readers have been surprised by the Book of Revelation, in which Michael leads the heavenly hosts in the decisive War in Heaven.

Somewhere in the century or so after 250 BC, angels became firmly established in Jewish thought, and they acquired names and identities. Not everyone accepted these new ideas. As the Book of Acts famously notes, “The Sadducees say that there is no Resurrection, and that there are neither angels nor spirits, but the Pharisees believe all these things” (Acts 23.8).  But after the Jewish War, Pharisaic Judaism triumphed.

In my next post, I’ll suggest why this new view of angels developed when it did.

From a great many books on the topic, I have used Timothy H. Lim and John J. Collins, The Oxford Handbook of the Dead Sea Scrolls (New York: Oxford University Press, 2010).

October 26, 2014 Of Monks, Mounds and Massacres
Recent Comments
2 Comments | Leave a Comment
Browse Our Archives
get the latest updates from
Anxious Bench
and the Patheos
Evangelical
Channel
POPULAR AT PATHEOS Evangelical
1