At some point in Jewish history, texts began referring to angels with specific names like Gabriel or Michael, and that trend reflects a basic shift in concepts of the supernatural hierarchy. That shift is significant itself in terms of the history of Western religion, but it particularly matters for anyone interested in early (or medieval) Christianity.

One  influential witness to angel lore is the Book of Enoch, which in the form we have it is a combination of at least five separate works, dating from different eras. The heaviest concentration of angelic characters comes from the early section of 1 Enoch called the Book of the Watchers, which describes how fallen angels mated with human women, and produced the monstrous Nephilim (The story was recently recycled in the film Noah). This portion certainly predates the late second century BC. It probably dates from the third century, but conceivably might have been written in the fourth.

I am here using the 1917 R. H. Charles translation. For a recent scholarly version, see Miryam T. Brand, “1 Enoch,” in Louis H. Feldman, James L. Kugel and Lawrence H. Schiffman, eds., Outside the Bible (Philadelphia: Jewish Publication Society, 2013), vol ii, 1359-1452. Brand, incidentally, points out that the original Genesis text concerning Enoch referred to him in the context of ha-elohim, which today is translated “God.” For a Second Temple reader, though, it implied “angels.”

Reading 1 Enoch, we immediately seem to be in a world that is quite recognizable from early Christianity, not least in the searing vision of a Day of Judgment with which the work opens. And it is the Parables of Enoch above all that show the term Son of Man being used in a Messianic sense. Also familiar from early Christian literature is the concept of a holy man – Enoch – reporting on his travels through the supernatural heavenly world.

It is in the Book of the Watchers that we encounter several angelic names, grouped in a familiar pattern. We read about the sinful world before the Flood. “And then Michael, Uriel, Raphael, and Gabriel looked down from heaven and saw much blood being shed upon the earth, and all lawlessness being wrought upon the earth” (9.1-3. Brand’s translation gives Michael, Gabriel, Suriel and Uriel). Not only do we find the good angels or archangels here, but they are specifically complaining to God about the havoc being wrought by their evil counterparts, fallen angels like Azazel and Semjaza/Shemihaza. 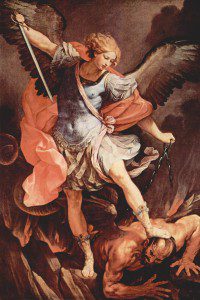 God responds by assigning each key angel a mission (Ch. 10):

Then said the Most High, the Holy and Great One spake, and sent Uriel to the son of Lamech, and said to him: ‘Go to Noah and tell him in my name “Hide thyself!” …

And again the Lord said to Raphael: ‘Bind Azazel hand and foot, and cast him into the darkness”…

And to Gabriel said the Lord: ‘Proceed against the bastards and the reprobates, and against the children of fornication”…

And these are the names of the holy angels who watch:

Uriel, one of the holy angels, who is over the world and over Tartarus;

Raphael, one of the holy angels, who is over the spirits of men;

Raguel, one of the holy angels who takes vengeance on the world of the luminaries;

Michael, one of the holy angels, to wit, he that is set over the best part of mankind and over chaos;

Saraqael, one of the holy angels, who is set over the spirits, who sin in the spirit; 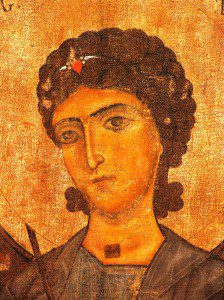 And round about were Seraphim, Cherubim, and Ophannim: And these are they who sleep not and guard the throne of His glory. And I saw angels who could not be counted, a thousand thousands, and ten thousand times ten thousand, encircling that house. And Michael, and Raphael, and Gabriel, and Phanuel, and the holy angels who are above the heavens go in and out of that house.

1 Enoch was very widely read, and regarded as authoritative. The New Testament Epistle of Jude cites it as canonical scripture, and many early Christian Fathers regarded Enoch as a great prophet. Jude, incidentally, is also among the earliest Christian texts to give a name to an archangel, that is, Michael (v.9), and this in the context of a contest with the Devil.

1 Enoch was also highly regarded by the community that produced the Dead Sea Scrolls during the second and first centuries BC. In those Scrolls, we find sections of four of the five sections of 1 Enoch, including the Book of the Watchers. Although much about the Dead Sea community remains uncertain, a foundation date in the mid-second century BC is most likely.

As I will describe in my next post,  the Dead Sea community was fascinated by angels, to the point that they represented a central part of their world-view. The view of angels and demons that we find in those texts resonates closely with what we know of early Christianity.

October 21, 2014 C.S. Lewis, Public Intellectual
Recent Comments
22 Comments | Leave a Comment
"This is a well-reasoned article seemingly backed up by valid data. Thank you."
Maine_Skeptic Refugees and the Enduring Cruelty of ..."
"The commentary on the Bible of Kralice (from 1579; https://en.wikipedia.org/wi... says this (my own translation ..."
mcepl I Gave Them Laws Through Which ..."
"Weren't the Septuagint translators Jewish? The texts they had access to, we do not have ..."
giovanni barca Bitter Words and Inspired Scriptures
"In Acts 15:15-17, James reads from Amos 9:11-12, but HIS Amos 9:11-12 is very different ..."
FredClark Bitter Words and Inspired Scriptures
Browse Our Archives
get the latest updates from
Anxious Bench
and the Patheos
Evangelical
Channel
POPULAR AT PATHEOS Evangelical
1