Who Is the Mormon Jesus?

In today’s post I am talking with Anxious Bench blogger and George Mason professor John Turner about his new book, The Mormon Jesus: A Biography. John has written previous books on Brigham Young, and on Campus Crusade for Christ.

TK: Your book is called The Mormon Jesus. What do Mormons actually believe about Jesus? Has that view changed over time, and have Mormons argued among themselves about this question?

JT: First off, it’s important to know that early Mormonism in its scriptures, revelations, and rhetoric was intensely christocentric and that contemporary Mormonism is as well. The Book of Mormon revolves around the figure of Jesus Christ, and the Christian Savior looms very large within the contemporary LDS Church.

In the intervening two centuries, Latter-day Saints have expressed a host of ideas about Jesus Christ. That’s why I appended A Biography as a subtitle to The Mormon Jesus. Mormons engaged many questions that have animated Christians for the last two millennia. Who is Jesus Christ? What is his relationship to God the Father? How does Christ’s death enable human salvation? When will Jesus return?

The church’s first seven decades (following its 1830 founding) were an especially fertile and creative era of reflection. Brigham Young identified Adam as humanity’s God, and he taught that the exalted Adam had returned to earth to impregnate Mary. Jesus was thus Adam’s son. In the early 1900s, the church definitively rejected this idea. Partly through the writings of LDS apostle James E. Talmage, the church achieved a rough consensus on the person and work of Jesus Christ in the early twentieth century. 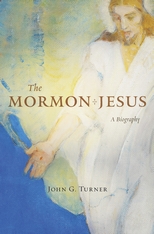 TK: What are the key differences between evangelical Christian and Mormon beliefs about Jesus?

JT: Two things. First, Latter-day Saints believe that God and Jesus Christ are two distinct corporeal beings. For example, a recent issue of an LDS children’s periodical explained that “Heavenly Father, Jesus, and the Holy Ghost [are] three different people.” Correspondingly, Mormons have generally understood Jesus’s sonship in a more literal sense than have most Christians.

A second key difference pertains to the role of Jesus Christ for human salvation. The LDS Church teaches that Christ’s atoning sacrifice enables the resurrection of all human beings and provides an opportunity for individuals to progress toward exaltation, meaning a higher level of glory within the celestial kingdom. Only those individuals who make and keep covenants with God on earth — beginning with baptism but also including additional ordinances — will be exalted into the presence of God and their savior for eternity.

That being said, Mormons and evangelicals have far more common ground than most typically realize. Latter-day Saints believe in Jesus Christ as God’s divine son, the divine agent of the world’s creation, the resurrected savior and redeemer of the world, and the earth’s coming king.

Finally, one more small difference. Evangelicals talk about “Jesus” in a very familiar manner and with informal language. Mormons object to such familiarity and instead refer to “Jesus Christ” and “the Savior.”

TK: You write that “American Protestant readers found in the Book of Mormon a Jesus who was familiar to them, a major reason for the book’s appeal and ongoing usefulness as a missionary tool.” Do you mean that Mormonism flourished in part because it was not that different from prominent types of Christianity in nineteenth-century America?

JT: Within its Protestant American context, there was both a familiarity and a distinctiveness about early Mormonism. The Book of Mormon itself is intensely christocentric, and the Jesus in its pages very much resembles the Jesus of the New Testament. Careful readers would have noticed the way that the Book of Mormon engages and resolves intra-Protestant disputes about topics such as infant baptism and the scope of human salvation. Also, the Book of Ether (the penultimate of the Book of Mormon’s fifteen books) teaches that Jesus Christ had a spiritual body prior to his earthly life. For the most part, though, Protestants who read the Book of Mormon would have found a very recognizable Savior. Converting to Mormonism was a matter of concluding that the LDS Church (simply called the Church of Christ initially) was that savior’s true, restored church.

In many other ways, early Mormonism was far more distinctive. No other church called on its converts to decamp for the western frontier and gather in an American New Jerusalem in anticipation of Christ’s imminent return. And by the early 1840s, Joseph Smith and his close followers had introduced a number of new doctrines and rituals that made Mormonism an original and distinct form of Christianity.

TK: How do Mormon ideas about Jesus’s ongoing revelations differ from evangelical beliefs on that topic?

JT: During the earliest days of what became the LDS Church, Joseph Smith dictated scores of revelations containing the words of Jesus Christ to his church. That method of ongoing revelation faded over time. Nowadays, church leaders teach that while revelations may come through an audible voice or contain discrete words, they are more likely to come through the “still, small voice” of God’s spirit. At the same time, many Latter-day Saints believe that the Savior personally appears to the highest-ranking leaders of the church.

One major difference between Mormons and evangelicals on the subject of revelation is that Latter-day Saints believe that God has appointed modern-day prophets and apostles to receive revelation for Christ’s church. All church members may receive revelation appropriate for their particular callings or positions within the church and their families, but never in contradiction to church doctrine or policy. So Mormonism has both a democratic practice of revelation that would resonate with evangelicals, but also a hierarchical, institutional understanding of revelation foreign to evangelicalism.

TK: I was surprised to learn that some Mormons once taught that Jesus was married. How common was that belief, and how was it connected to the Mormons’ view of marriage?

JT: It’s hard to know how many rank-and-file nineteenth-century church members accepted the idea that Jesus was married (to multiple women) and fathered children, but the idea received support from many high-ranking leaders, including Brigham Young and Joseph F. Smith (the founding prophet’s nephew). I could not trace the idea of a married Jesus to Joseph Smith, but many Latter-day Saints articulated it in the 1850s, roughly at the same time that the church began its not very successful public defense of polygamy. Some church members concluded that they were the very descendants of Jesus Christ.

Evangelicals writing critiques of Mormonism have frequently used nineteenth-century quotes about a married Jesus as evidence that the Latter-day Saints follow a radically different and heretical savior. It’s important to note that LDS leaders publicly backed away from the idea more than a hundred years ago. Also, while I do not think there is any persuasive biblical evidence for a married Jesus, I don’t think Christians need to hyperventilate at the notion.