The Boston Tea Party of 1773 was the most provocative Patriot action before the start of the Revolutionary War in 1775. Most Americans vaguely know that the Tea Partiers pitched tea into Boston Harbor, because they were angry about taxes. But what actually provoked the Tea Party? The key instigator was Samuel Adams, a devout Christian. Should Christians look back on the Tea Party as a courageous act, or an unwarranted, if understandable, overreaction?

The crisis that led to the Revolution actually happened in two stages, one from 1765-1770, and the second from 1773-1775. The first stage ended, strangely, with the Boston Massacre, in which occupying British soldiers shot and killed five Bostonians who had been provoking them and pelting them with snow and ice. Even though the first phase of the crisis quieted down after the Massacre, colonists remembered the precedent: British forces had already shed blood.

The fundamental problem in the Revolutionary crisis was, as we learned in school, “taxation without representation.” Colonists protested that measures like the Stamp Act of 1765 were illegitimate because Parliament did not have the right to tax them. Only their elected representatives did, they argued.

One might assume that the Tea Act of 1773 was just another tax hike. The reality was more complicated. What the Tea Act actually did was to lower some trade duties on the tea imported by the powerful but struggling British East India Company. Parliament also granted the East India Company the right to sell directly to American consumers, cutting out the lucrative business of American middlemen.

The end result, Parliament hoped, would be new business for the East India Company, and cheaper prices for East India tea. All of this would clamp down on the American trade in smuggled tea. Some estimates suggest that 80-90% of tea consumed in certain cities before 1773 was illegally smuggled.

The merchant middlemen in America were angry about the Tea Act for obvious reasons – they were losing good business. Patriots also regarded the East India tea agents as royal flunkies. Most importantly, the Patriots thought that the change in the tea trade was an effort by British authorities to get Americans to accept Parliament’s right to tax them, because import duties on East India tea did remain in effect in American ports, in spite of the lowered costs.

New York and Philadelphia actually saw the most effective resistance to the new tea. Patriots there used threats of violence (especially tar and feathering) to prevent the tea ships from unloading, and the East India ships simply left those cities. But in Boston, the Patriots and royal authorities stalemated over whether tea ships would be allowed to unload at Boston Harbor.

Samuel Adams and other Patriots led massive protest meetings once the first tea ship arrived, with as many as one-third of Boston’s population in attendance. Once Adams announced on December 16 that they had no more hope of deterring the royal authorities, dozens of men (apparently on cue) left the meeting, blackened their faces, dressed as Indians, and boarded the ships. They opened 340 chests of tea and dumped their contents into the chilly waters. The vandalism cost the East India Company about 9000 British pounds sterling.

Given the memory of the Boston Massacre, and eight years of largely futile struggle over taxation and representation, Adams and the rioters’ actions were understandable. The Patriots already had a longstanding tradition of non-consumption of British imports as a means of protest. These campaigns sometimes worked, but sometimes they faltered. (As Britons, the American colonists loved their tea!) It was tempting for them to do something radical to circumvent the risks of a haphazard non-consumption campaign.

Given the complexity of the Tea Act’s effects, however, and the fact that it was meant to crack down on smuggling, it is hard from a Christian perspective to commend what Adams and his followers did. One thing is for sure: the Tea Party led to a massive backlash against Boston by the British government in 1774, making the coming of war much more likely. 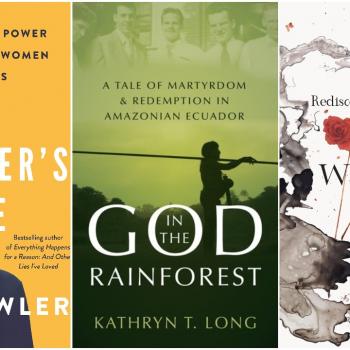 Evangelical
Our Favorite Books of the Past Year
Anxious Bench