Billy Graham at The Anxious Bench

I got back from lunch just now and found about four times the normal number of links on my Feedly reader. Which is what happens when you’re interested in evangelicalism and Billy Graham dies, at the age of 99.

So, knowing that there’s no shortage of commentary on this particular passing — and that at least one or two of us will write more in the days to come — let me share just a few of the many Anxious Bench posts that have the life, ministry, and legacy of Billy Graham.

• I think almost all of us have written about America’s greatest evangelist at some point, but none more often than John. In 2015 he considered Graham’s understandings of Scripture and of heaven, and in 2017 the evangelist’s many appearances on college and university campuses. Five years ago he noted the passing of Graham’s chief musical partner, George Beverly Shea. But if you have time for just one of John’s posts on this topic, see his 2013 reflection on Graham’s legacy.

(For that matter: Graham figures prominently in John’s book on Campus Crusade founder Bill Bright, which starts with Bright and Graham speaking at Explo ’72, a Christian youth festival in Dallas.) 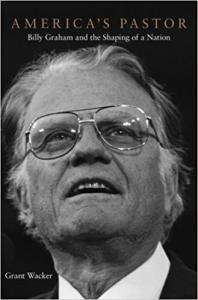 • A couple of John’s posts started from reading Grant Wacker’s biography of America’s Pastor, which guest blogger Nathan Finn reviewed for us in 2014.

• Graham played a role in Carl Henry’s push for an evangelical research university, which David revisited earlier this year in a two-part series on “the limits of evangelical intellectualism.”

• David once considered Graham in the context of religion in the 1970s, as Philip had done a few months earlier for the 1940s.

• In the wake of the events in Ferguson, Missouri, Miles Mullin interpreted evangelical support for “law and order” in terms of Graham’s “politics of decency.”

(Speaking of Anxious Bench alumni… co-founder John Fea has already published several posts about Graham’s death at his blog, The Way of Improvement Leads Home, including this initial set of personal and scholarly reflections.)

• In his last years, Graham has perhaps been in the news most often for two reasons: commentators drawing contrasts drawn between him and his son Franklin; and debates over the rule named after him: not to meet alone, in private, with a woman other than his wife. Having first explored that rule in an April 2017 post, Beth later ended a post on sexual harassment at academic conferences by warning Christian scholars and institutions that “If you implement the Billy Graham rule against your female colleagues, you are creating a whole new problem that still involves discriminating against women.”

• My own turn came latest of all: Graham’s supporting role in a second season episode of The Crown got me interested in the historic relationship between Graham and Queen Elizabeth II, and the way that drama has depicted that monarch’s faith. (By the way, Sarah Pulliam Bailey of the Washington Post ran a nice fact-checking article on this episode.)

Peace be to the memory of Billy Graham.

Evangelical
An Inadequate Response from One Minnesotan
Anxious Bench

Ten Biblical Reasons to Give, and an Opportunity...
Our family has continuously sponsored a number of children through Compassion for...
view all Evangelical blogs
What Are Your Thoughts?leave a comment
Copyright 2008-2020, Patheos. All rights reserved.