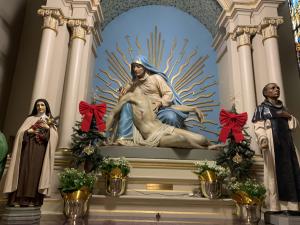 It was Christmas, 1388, in Shrewsbury, a bustling market town far in the west of England.  Winter frosted white the new timbers of the Bear Steps Hall, sparkling on the new glaze of the abbey’s west window, making even the centuries-old streets look new and fresh.

Not much else was new in this old town, so early on that Christmas day in 1388. Neither the coming of Richard II’s Great Parliament in 1398 (the second parliament hosted by Shrewsbury) nor the Lollard heresy (sparked by the teachings of the recently deceased John Wycliffe) would significantly impact Shrewsbury until the 1390s. The great Battle of Shrewsbury, which helped solidify the throne of Richard II’s usurper (Henry IV), was still in the future while the Black Death, which killed 30-50% of the European population, was safely in the past.

1388, historically speaking, was a quiet year for Shrewsbury.

Indeed, for those townsfolk living in the small parish of St. Alkmund’s (the western half of Shrewsbury’s Castle Foregate, Hencot, Abrightlee, Harlscot, Dinthill, and Preston Monford), continuity more than change would have marked their Christmas morning. They would have done as those in Shrewsbury had done since before the Norman Conquest, gathering at their local church to celebrate the birth of Jesus. No gothic spire, as later praised by A.E. Housman, yet soared from St. Alkmund’s nave, and no stained glass Virgin, as she would by 1795, yet ascended to glory in the east window. But solid walls of a church had stood in this spot since the early 10th century, and  “Cristes maesse” (Christmas) had been celebrated in England since at least the early 12th.

One thing was new that Christmas in England, and it certainly might have sh 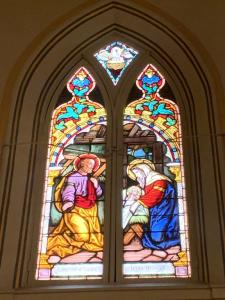 owed up at St. Alkmund’s. Sometime during the 1380s, John Mirk, an Augustinian canon from the nearby abbey of Lilleshall (about 15 miles from Shrewsbury), wrote what would become the most popular English sermon collection in late medieval England. Mirk’s abbey at Lilleshall had a long history with St. Alkmund’s, and Augustinian canons like Mirk were licensed to serve as parish priests. Indeed, we know that Mirk intended his sermons to be preached by parish priests, and he even specifies the church at St. Alkmund’s in one of his sermons.  Chances were good that Festial was preached in the old church of St. Alkmund’s, perhaps even by Mirk himself. (See Susan Powell’s introduction, xx-xxv, as well as my co-authored Oxford Bibliography w 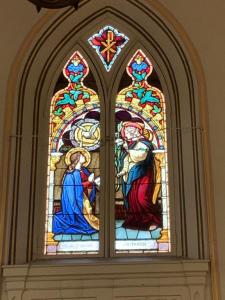 John Mirk wrote his sermons to help priests teach people what they needed to know about their medieval faith, especially the saints who had gone before them. As he explained his purpose in the prologue, “to teach their parishioners of all the principal feasts that come in the year, showing them what the saints suffered and died for God’s love, so that they should have more devotion to God’s saints and a better will to come to church and serve God and pray to the holy saints for their help.” I know my Evangelical Protestant audience will balk at Mirk’s emphasis on devotion to saints, but just think about it for a minute. By emphasizing the belief of Christians in the past, Mirk hoped to strengthen the faith of believers in the present. Yes, medieval Christians did believe in the intercession of saints, which meant that they would pray to St. Peter or St. Mary Magdalene, asking the saints as “friends of God” to intercede with God on the penitent’s behalf.  But the Nicene Creed formed the foundation of their Christianity, and what they believed about Jesus is the same as my Baptist faith teaches me: the miraculous birth, death, and resurrection of Jesus Christ, God in flesh, brings salvation to all who will repent and believe.

John Mirk’s sermons were new in the 1380s, but what they taught was very traditional. Mirk was helping reinscribe orthodoxy in late medieval England, making sure everyone understood the basics of their faith. He may have been innovative with his methodology, stuffing his sermons full of entertaining stories to better keep the attention of his audience, but he wasn’t innovative with his theology.

The essence of his Christmas sermon was simple: the birth of Jesus made redemption possible, giving humanity hope for salvation from the Fall. As he wrote: “Good Christian men and women, as you see and hear, this day all Holy Church makes melody and mirth in mind of the blessed birth of our Lord Jesus, very God and man, that was this day born of his mother Saint Mary for the great help and deliverance of all mankind.” Jesus, Mirk continues, “made peace between ‘God’ and man” by becoming a true mediator–both God and man–so that his holy blood could redeem humanity and restore “the joy of paradise that man lost by covetousness and pride.”

It is the significance of Mary.

When a medieval audience heard Mirk’s Christmas sermon, they heard something amazing about women. You see, in their world, women’s bodies were cursed to be weaker, to be more prone to sin, to be unworthy of approaching the altar, to be subservient to the authority of men. 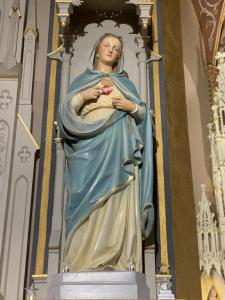 ‘s Christmas story, Mary became something more. Instead of unworthy, she  was deemed worthy enough to carry the son of God. Instead of dependent on men, she was empowered by God to be independent–giving birth to Jesus without assistance from either Joseph or the midwives (they arrived to late to help). Indeed, Mirk pointedly writes that “our Lady was delivered and wrapped her Son in clothes and laid him in the cradle before the ox and the ass” well before Joseph finally appears on the scene. Instead of her weak status disempowering her, it is what Mirk argued made her perfect to bring Jesus into this world. As Mirk wrote, “though he himself were Lord of all Lords, he was born of poor station, and of a poor maiden, and in a poor place…giving example to all men to set naught by worldly riches nor by the pride of this world.” Because he came from such humble beginnings, a babe in the arms of a woman, “all men and women for love should have boldness to come to him to seek grace.” The lowly status of both Mary and Jesus, argued Mirk, made Jesus accessible to ordinary people.

For Mirk’s medieval audience, God not only used a woman to bridge the gap for Him to come to us, but God used a woman to bridge the gap for people to have the courage to come to God.  It is telling that Mirk concludes his nativity sermon with the story of an ordinary woman overcome by shame from a sexual sin. She was too afraid to confess it, believing that she was unworthy. Mirk records that she almost fell into despair. Finally, she remembered that Jesus had come not as a powerful man but as a lowly child. This emboldened her to cry out to Christ for mercy, and she was rewarded by Jesus speaking directly to her from heaven, “your sins are forgiven.” This woman did not relate to Jesus as a man or even as a suffering God; she related to him as a child, born of an ordinary woman just like herself.

In a world that told women they were less than men, the Christmas story told medieval women something different. As another late medieval preacher wrote, “The daughter of Eve was the beginning of damn 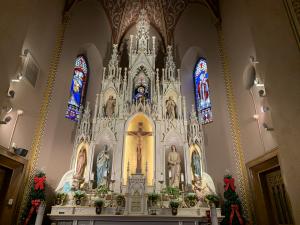 Christmas tells the story of God’s gift of salvation for the whole world. As John Mirk wrote, “light shall shine this day upon us. For the Father of heaven sends grace of ghostly light on all men that believe that Christ was this day born, very God and man.”

Christmas also tells the story of God’s gift to women. Like the medieval world, the modern evangelical world tells women that we are less than men; it tells us that we are designed to submit to masculine authority; it tell us to “go home” because we cannot be vocationally called like men. It even characterizes Christianity as having a “masculine feel.”

But the Christmas story tells women we are more. Because God used Mary to be the mother of Jesus, God made sure that women would always have a seat at the Christian table. Because of Christmas, women can never be written out of God’s story.

(The images are from our recent family trip to San Antonio. We visited St. Joseph’s parish church on East Commerce Street.) 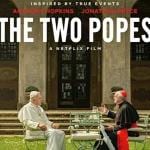 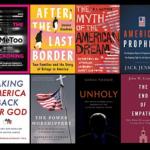 December 26, 2019 Coming Soon: 2020 Must-Reads in Christianity and Politics
Recent Comments
2 Comments | Leave a Comment
Browse Our Archives
get the latest from
Anxious Bench
Sign up for our newsletter
POPULAR AT PATHEOS Evangelical
1