Nazarenes and Christians and Baptists

SPOILER ALERT: Despite my title, this blogpost is not about the modern-day Baptist denomination. These aren’t the Baptists you’re looking for. You can go about your business.

When we look at the early Christian world, we usually draw a straightforward line between Christians, Jews, and pagans. At the time, matters seemed more complicated, especially when we look beyond the strict confines of the Roman Empire, and some of the divisions that people drew should surprise us. I will here be drawing on an intriguing source for early Christian history that is surprisingly little known. That raises the much larger issue of how we study that history, and how we define the world(s) we are looking at.

From very early times, Christianity became a real force in the lands east of Palestine, in Syria and Iraq, and in many territories ruled by the vast Persian Empire. In a sense, that empire represented a kind of mirror image of the Roman world. Yet much of that eastern Christian history is virtually unknown to mainstream scholars of early Christianity, who focus exclusively on Europe and the Mediterranean world. In consequence, we are missing a large part of the story.

A leading figure in Persia’s Zoroastrian priesthood in the mid-late third century was one Kartir (or Kerdir), a revolutionary figure who departed from the standard imperial model of wide-ranging cultural tolerance. In the 270s, at Naqsh-e Rajab near Persepolis, Kartir commissioned some immodest inscriptions that vaunted his services to this faith and his empire. Among these informative words, we find a boast of his intolerant and persecuting activities, and how he had “smitten” various minority religions:

The heresy of Ahriman [the Devil] and the demons departed and was routed from the empire. And Jews and Buddhists and Hindus and Nazarenes and Christians and Baptists and Manicheans were smitten in the empire, and idols were destroyed, and the abodes of the demons disrupted and made into thrones and seats of the gods.

But who was actually smitten? Translators agree that he gave seven names, but they vary quite widely on how they identify the victims. For the sake of argument, let us agree on Buddhists, Hindus, Manicheans, and Jews, about whom there is a general consensus, and focus on the controversial Christian aspects of the inscription. In most readings, “Nazarenes and Christians and Baptists” all fall under the general umbrella of what we would call Christians, but they are as separate from each other as they are from Jews or Buddhists

All scholars who have addressed this issue agree that he listed Christians, kristen, but what about the other groups? Two other words are reconstructed as Nasra and Makdag. The first of these is commonly read as Nazarenes/Nazoreans. Conceivably, Kartir was drawing a distinction between Greek and Syriac-speaking Christians, regardless of any theological bent: in recent years, the Persian Empire had captured and deported many Christian communities into its homeland. “Christians” would be Greek, “Nazarenes” Syriac.

But would that linguistic divide in itself to justify Kartir’s distinction? Would he really be so informed as to assume that the two groups were not essentially the same? Perhaps, as has been suggested, these represented different churches and critically distinctive theological approaches. In the West, Nazarenes/Nazoreans often implies Jewish-Christians, perhaps related to the Ebionite sect. In the east, though, its suggests orthodox/mainstream believers. This was the usual self-description of the great Syriac Church of the East, and even today that is the name that believers give themselves in contemporary Iraq.

We naturally assume that the unadorned “Christians” refers to mainstream, orthodox believers, the kind who would be in fellowship with Antioch or Alexandria, but that is not necessarily so. Scholars suggest that in this context, the word refers to Marcionites, those Christians who rejected the Old Testament and its God. If that is the case, then orthodox believers are comprehended under another term, namely Nazarene/Nazorean.

You could either be a “Christian,” or you could believe in the Old Testament: pick one option. It’s rather like in parts of modern-day Asia, where uninformed outsiders draw a self-evident distinction between “Christians” and “Catholics”!

That third group, the “Makdag” are the most difficult to decipher. The term could well refer to Jewish-Christian baptismal sects like the Elchasaites, and that is how many scholars read it. Less likely, it suggests another related group altogether, such as the Gnostic Mandaeans who survive in southern Iraq. The Elchasaites, by the way, have been called the “Babylonian Baptists.”

Let us assume that Kartir was listing the empire’s “Western” religious minorities as Jews, Manicheans, and three “flavors” of Christians. I suggest that these Christians were, respectively, mainstream/orthodox; Marcionites; and Jewish-Christian baptismal sects. Put another way, in the late third century – within the lifetime of the future Constantine the Great – this was the familiar taxonomy of Christians in the eastern world, in that vast territory lying east of Syria. There were Christians, Nazarenes, and Baptists, with no suggestion that any one group was dominant.

Just possibly, the order in which sects are listed suggests that Kartir saw the Manicheans as part of the broader Christian continuum. And that was by no means a ridiculous idea. Mani actually began his career in the Elchasaite baptismal sect.

To Western eyes, this is an odd and surprising catalogue, which is very different indeed from what we might expect from a standard source like Eusebius’s Church History. Clearly these eastern Christians had their own distinctive range of controversies and divisions, which differed fundamentally from the concerns obsessing the Christians of Egypt or Italy.

The sheer number of groups listed is also surprising. Kartir makes no quantitative claims, and assuredly had no idea of the actual number of adherents that any given tradition had. The order in which he lists sects may or may not give any indication of their relative population or strength, but it is interesting that he begins with Jews, who we know to have abounded in Persian-ruled Babylonia. Although Christian (or Christian-ish) sects do not stand at the start of his list, there are no fewer than three of them. That suggests that Christians enjoyed real numbers and/or visibility, enough to arouse real alarm for the Persian state religion.

Of course, Kartir’s assertion that he had “smitten” or destroyed these groups was simply false. There were plenty of Christians left for the Persians to persecute in later centuries.

Not for a second do I believe that I am making some kind of scholarly discovery in recounting this story, which is absolutely familiar to that body of highly-qualified experts who specialize in Persian and Iranian matters, in Iranology. Yet I don’t believe I have often seen this inscription referred to in the very substantial “mainstream” literature on early Christian history, or on those movements we deem heretical. That may be my ignorance, and I am quite prepared to be corrected.

My impression, though, is that this is yet another example of that vast eastern Christian history that we do not study because it did not happen on the maps that limit our geographical perspective. Then as now, a whole other Christian world existed out there, and we should not neglect it.

The literature on all this is huge. I offer a very brief and near-random list by way of background and sources:

Encyclopedia Iranica online is a wonderful and accessible resource, with great bibliographies.. See for instance the entries on Kartir, Shapur I, the Sasanian Dynasty, Jews, or Manicheism. The entries on Christianity are invaluable, and extensive, with a separate entry on Christian martyrs.

Parvaneh Pourshariati, Decline and Fall of the Sasanian Empire: The Sasanian-Parthian Confederacy and the Arab Conquest of Iran (2008).

Kyle Smith, Constantine And The Captive Christians Of Persia : Martyrdom And Religious Identity In Late Antiquity (University of California Press, 2016).

I write about the baptismal sects at some length in my 2017 book Crucible of Faith.

I am adapting this post from a column I wrote several years ago for Aleteia. 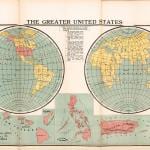 July 21, 2020 How to Hide an Empire
Recent Comments
0 | Leave a Comment
Browse Our Archives
get the latest from
Anxious Bench
Sign up for our newsletter
POPULAR AT PATHEOS Evangelical
1